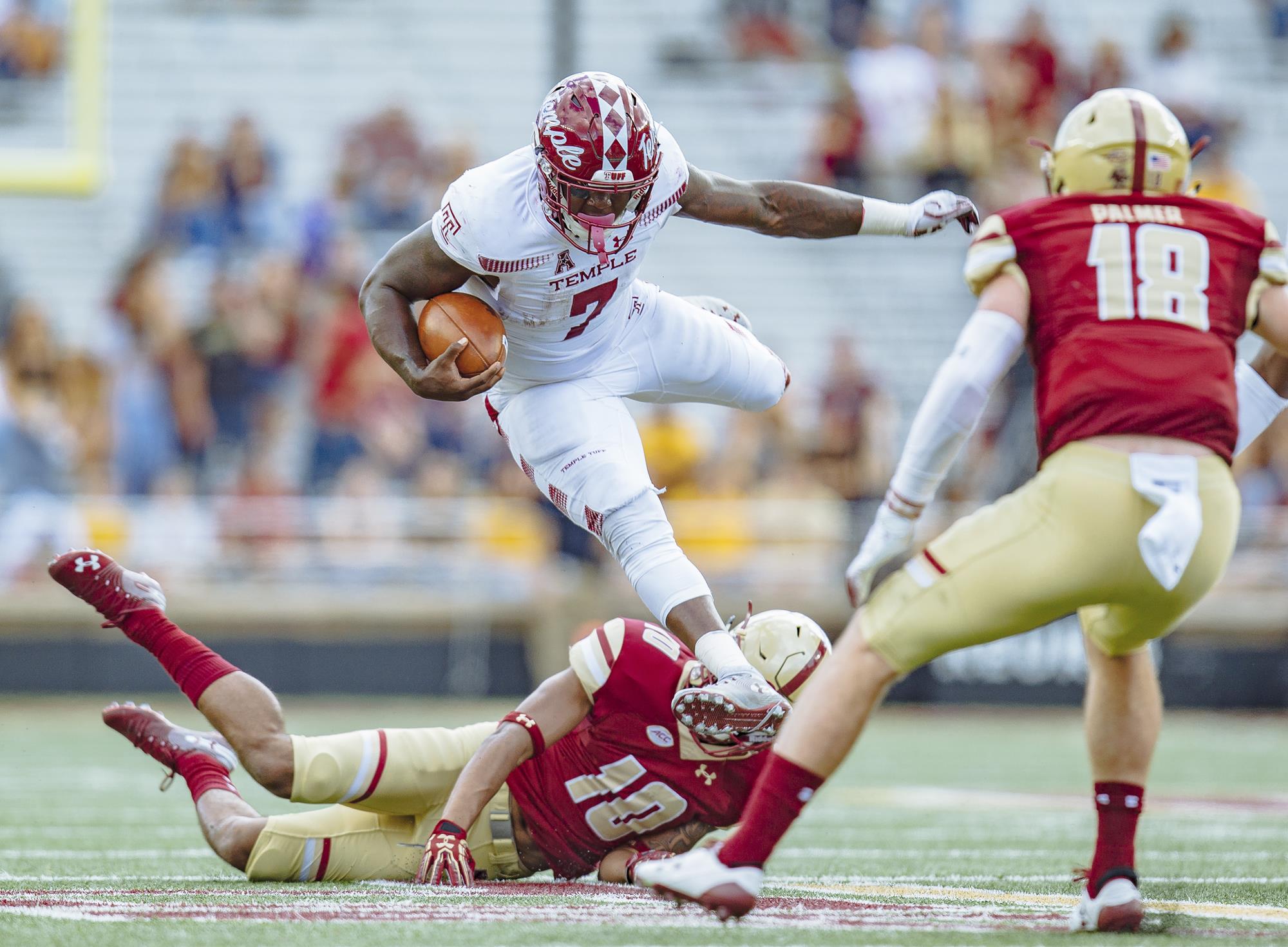 Five players including Ryquell Armstead from Temple, Brent Stockstill from Middle Tennessee, Jordan Love from Utah State, Tre’ Crawford from UAB, and Pop Williams from Memphis have been selected as the College Sports Journal All-Stars for the week ending Nov. 11, 2018 from the NCAA Division I FBS Group of Five schools.

Ryquell Armstead, RB, Temple, Sr., Millville, N.J.
Armstead rushed for 210 yards and an American Athletic Conference-record six touchdowns to lead Temple to a 59-49 win at Houston, keeping the Owls a game out of first place in The American’s East Division standings. Armstead scored on runs of 5, 4, 2, 33, 4 and 6 yards as part of a Temple offense that gained 537 yards.

Brent Stockstill, QB, Middle Tennessee, Grad., Murfreesboro, Tenn.
Stockstill turned in another stellar performance to lead the Blue Raiders to their seventh win and continue to etch his name in the C-USA record book. Stockstill completed 31-of-40 passes for 352 yards and four touchdowns in Middle Tennessee’s 48-32 road win against UTEP. It marked the 17th 300-plus yard game of Stockstill’s career, which is a school record and moved him into fifth place on the C-USA all-time list in that category. Not only did the four TD passes enable the Blue Raiders to secure their fourth straight bowl game for the first time, but it pushed his career total to 98, which is fourth-most all-time in C-USA. He needs two more touchdown tosses to become the 25th player in FBS history to throw 100 TDs. This is Stockstill’s third C-USA Offensive Player of the Week award this season and the sixth of his career.

Jordan Love, QB, Utah State, Soph., Bakersfield, Calif.
In Utah State’s 62-24 victory vs. San José State, Love threw for a career-best 491 yards and five touchdowns, while rushing for another score. After playing in just three quarters, he completed a career-high 32 completions, while the five touchdown passes tied a program record. He threw touchdown passes of 42, 24, 7, 37 and 88 yards. The 88-yard strike to Darwin Thompson is tied as the sixth-longest pass in Utah State history and the longest throw by an Aggie since 1990. Love led the Aggies to a school record 804 yards of total offense, which is the third-most in Mountain West history.

Tre’ Crawford, LB, UAB, Sr., Houston,Tex.
In UAB’s 26-23 overtime victory against Southern Miss, senior LB Tre’ Crawford had four total tackles, 3.0 sacks (totaling 33 yards), 3.5 tackles for loss and two additional quarterback hurries to lead the Blazers to the C-USA West Division title. He led a defensive unit which recorded 7.0 sacks and 13.0 TFL on the night, becoming the first UAB player since 1993 to have three sacks in a game. UAB leads the nation in total sacks (38) and sacks per game (3.80), while placing third in total defense (260.8 yards per game).

Pop Williams, KR/WR, Memphis, Jr., Destrehan, La.
Williams had 109 yards on four punt returns, including a 72-yard return for a touchdown, in Memphis’ 47-21 win against Tulsa. Williams, who also scored a touchdown on a 1-yard reception in the first quarter, is the American Athletic Conference leader in punt return average at 12.9 yards per return.