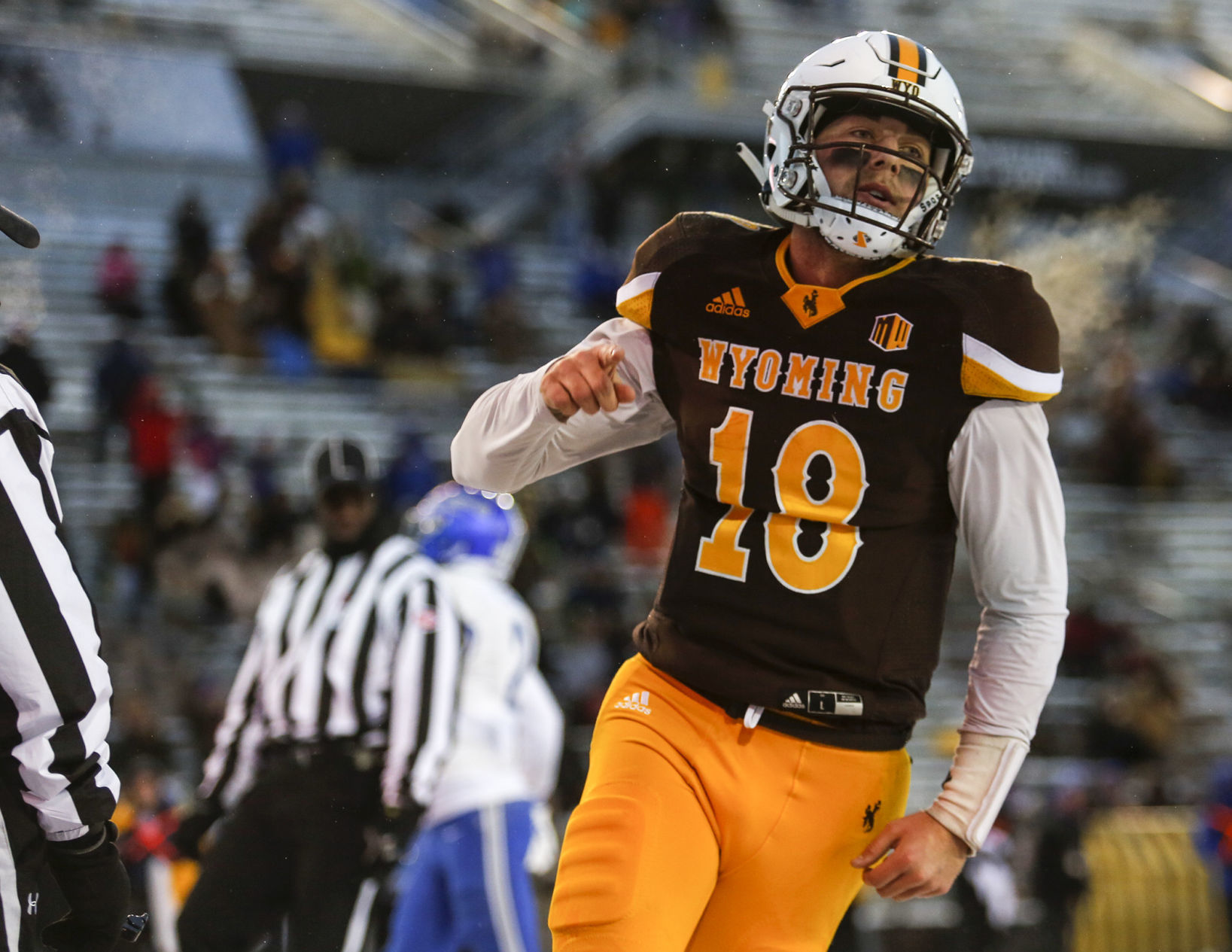 Five players including Tyler Vander Waal from Wyoming, DeAndre Torrey from North Texas, A.J. Ouellette from Ohio, Justin Clifton from Arkansas State, and Isaiah Wright from Templehave been selected as the College Sports Journal All-Stars for the week ending Nov. 18, 2018 from the NCAA Division I FBS Group of Five schools.

Tyler Vander Waal, QB, Wyoming, R-Fresh., Elk Grove, Calif.
In Wyoming’s 35-27 come-from-behind victory over Air Force on Saturday, Nov. 17, recorded 247 yards of total offense and four total touchdowns. With 8:44 left in the game, the Cowboys were trailing 27-14. Led by Vander Waal, Wyoming scored 21 unanswered points in the final five minutes to secure the win. He entered the game in the first quarter after starting QB Sean Chambers was injured, throwing for a career-best 225 yards and two touchdowns. He added 22 rushing yards and two touchdowns on the ground.

DeAndre Torrey, RB, North Texas, Soph., Gautier, Miss.
Torrey helped lead the Mean Green to a 41-38 home win over Florida Atlantic, carrying 17 times for a career-best 184 yards, averaging 10.8 yards per carry, with two total touchdowns in the win. He also caught two passes for 38 yards, giving him a career-high 222 all-purpose yards on the night. Torrey opened the scoring for the Mean Green on a 13-yard touchdown catch, his second receiving touchdown of the season and capped it off with a 92-yard TD run that pushed the Mean Green lead to 41-31 late in the fourth quarter. The 92-yard run was the longest offensive play of the season for the Mean Green, the fourth-longest run in program history, and the longest since 1995 when Cedric Cromer busted a 95-yard run. Torrey has a team-high 13 rushing touchdowns on the season, and leads the team with 16 total touchdowns (which ranks sixth in the nation).

A.J. Ouellette, RB, Ohio, Sr., Covington, Ohio
Ouellette rumbled for a career-high 196 yards and two touchdowns on 26 carries and also caught a touchdown to lead a 52-17 win over Buffalo on Nov. 14. Ouellette rushed for an eight-year touchdown in the second quarter, caught an eight-year touchdown pass from quarterback Nathan Rourke in the third and capped off the scoring for the Bobcats with a 33-yard touchdown run in the fourth. He posted his third 100-yard rushing performance of the season and 12th of his career. Ouellette has scored a career-high 10 rushing touchdowns in 2018, giving him 30 rushing touchdowns for his career, tying him with Rourke for the third-most in program history.

Justin Clifton, DB, Arkansas State, Sr., DB, Tupelo, Miss.
Clifton recorded a season-high two interceptions, including one he returned 43 yards for a touchdown, and a pass break-up to help lead Arkansas State to a 31-14 victory over ULM and into a tie atop the Sun Belt Conference West Division standings. Part of a defense that limited the Warhawks to 276 yards total offense and just 17 points, Clifton recorded his pick-six on ULM’s first possession of the second half to give the Red Wolves a 24-7 lead. His second interception came on ULM’s last possession of the game on a 1st-and-10 play from the A-State 26-yard line, securing the victory as the Red Wolves were then able to run out the rest of the clock. Clifton’s two interceptions tied his career high and matched the most by a Sun Belt Conference player this season. His three total passes defended gave him 30 for his career, which ties the fifth most ever by a Sun Belt player.

Isaiah Wright, KR/WR, Temple, Jr., West Hartford, Conn.
Wright had 117 all-purpose yards, with all but three yards coming on special teams, to help Tempe to a 27-17 win against USF. Wright’s 73-yard punt return for a touchdown in the fourth quarter gave the Owls their first lead of the game.