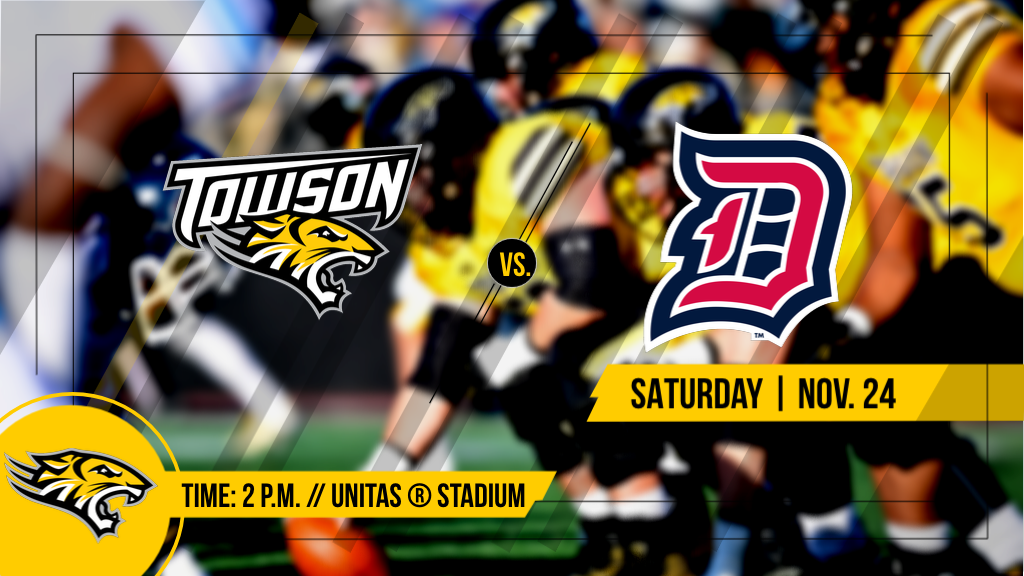 Season Recap: Duquesne tested itself in its non-conference schedule, playing two FBS teams along the way. The Dukes went 8-1 against the FCS this year with their only loss a shocking one point loss to Bryant who finished in the bottom of the NEC standings. Duquesne boasts a balanced offense with a strong quarterback and running back leading the way, Daniel Parr and AJ Hines. As champions of the Northeast Conference this year, the Dukes earned the automatic bid into the field of 24 and start their playoffs at Towson

Playoff Ceiling: The Dukes best case is to hang close to Towson, but they don’t really have a shot to win this game.

Key Player This week: RB AJ Hines is a finalist for the Walter Payton Award this season. Hines has run for 1324 yards on the season. Hines should have some room to run against Towson. The only shot Duquesne has to make Towson nervous is to control the clock and keep the dangerous Tiger offense on the sideline. If Hines can find holes and keep the chains moving, the Dukes can keep the score close.

Fantasy Bonus Baby This Week: QB Daniel Parr had a nice season at the helm of the Duquesne offense. He averages just under 200 yards per game and threw 19 touchdowns against 9 interceptions. If the Dukes have a hope of staying in the game, Parr may have to match Tom Flacco throw for throw which is no easy feat. But the Dukes will most likely be playing from behind, so a large number of throws can be expected.

Season Recap: Towson was picked to finish tenth in the CAA preseason poll and the Tigers set out to prove everyone wrong. After starting CAA play 5-0 it was clear that Towson was underrated. The Tigers have an average defense but have the best offense in the CAA, scoring 36.7 points per game. The Tigers are led by Walter Payton award finalist Tom Flacco at quarterback and all purpose back Shane Simpson. After the strong start, Towson struggled down the stretch losing 3 of their last four games against other playoff bound CAA teams. The finish kept Towson from being considered for a seed and they slid into the field as one of 6 CAA teams, securing an at large berth.

Playoff Floor: The Tigers should easily advance against Duquesne but could fall in the second round against South Dakota State

Playoff Ceiling: Towson has the offense to hang with any team in the country. If they get the right breaks, the Tigers could find themselves in a semifinal matchup against North Dakota State.

Key Player This Week: QB Tom Flacco had a great season at the helm of the Towson offense, leading the team in passing and rushing and accounting for 31 total touchdowns. Flacco should have time to throw against an undermanned Duquesne defensive front, or run when the situation calls for it. An efficient game from Flacco should have the Tigers cruising into the second round.

Fantasy Bonus Baby This Week: RB Shane Simpson is the type of player that can make noise in all facets of the game. Towson leans on Simpson in the run game, pass game and return game. Simpson will score on the ground this week and has a great chance to score on special teams 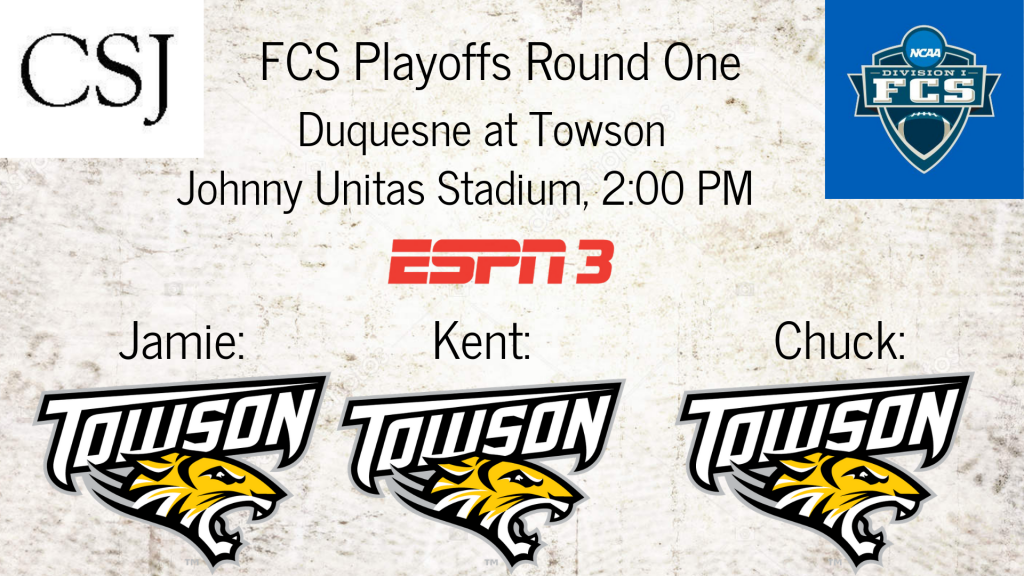 Jamie: Duquesne is a good football team and should be able to score some points this week. But they are not in the class of the CAA. Towson should easily roll in this game and move on to face South Dakota State. Towson 55, Duquesne 21

Kent: The Tigers should have an easy time over the Dukes. Look for Towson to win big and advance. Towson 38, Duquesne 10

Chuck: The Tigers should find these Dukes more to their liking. Towson 34, Duquesne 17