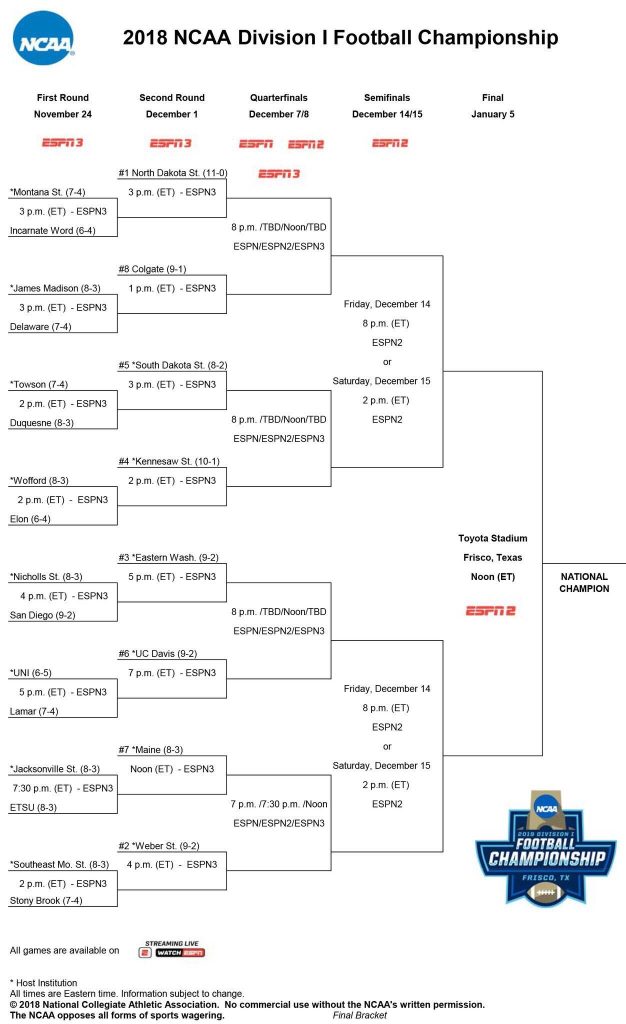 Q: What was your initial reaction at the field?

Jamie: Three Southland teams in the field is crazy. Lamar and Incarnate Word weren’t ranked all season, and they got in over a Furman team that beat all the SoCon’s representatives in the FCS Playoffs, an Indiana State team that went 7-4 in the Missouri Valley, and even a 6-5 North Dakota team with some really good wins.

Chuck: If I’m Monmouth, I’m furious that I didn’t make the field with 8 Division I wins. If all the rest of the at-large teams had 7 or more Division I wins, it could be easy seeing the Hawks as the odd team out, but three different 6-win teams got in over them (Elon, Incarnate Word, and UNI). Additionally, it’s hard to escape the impression that the FCS Committee almost rewrote the qualification rules on the fly explicitly to keep them out and to give a team like Incarnate Word a better chance to make it. 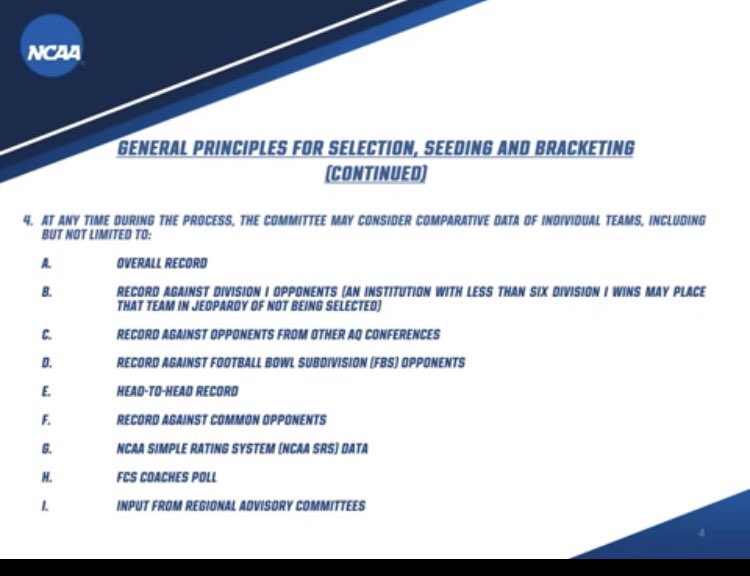 Note specifically C: “Record against Other AQ Conferences”, which seems to consider Mommouth’s game against Princeton, one of the top teams in the country, as a non-qualifier.

Best Move By The Committee:

Jamie: Elon was the best inclusion. It would have been a really terrible precedent to disqualify them from the field just because they cancelled their game against William and Mary because of the hurricane.

Kent: I think it was good that they put Northern Iowa in the field through the 6th seed bracket hosting a 1st round game. If they get past first-timer Lamar, they would be sent on the road to play UC Davis, another first-time FCS Playoff participant. Three years ago, UNI was sent to Portland State in a similar situation – on the road against a first-time West Coast-based playoff team.

Chuck: Having 7-4 Lamar make the field with five straight wins to close out the year, beating three teams (Sam Houston State, Central Arkansas, McNeese State) who spent time in the FCS Top 25 at some point during the year.

Biggest Snub by the Committee:

Kent: Indiana State went 7-4, winning its last five contests. Typically, how a team finishes is considered when choosing the field but not this year. And the game before the streak, the Sycamores took Top 5 seeded South Dakota State to overtime before falling. The reason the committee must have not picked Indiana State must have been the early MVFC contests against Northern Iowa and Missouri State as well as one of its seven wins was against NAIA Quincy (IN). But having just three teams from the MVFC and six from the CAA–the two top conferences in the country seems to be out of proportion.

Jamie: James Madison got a horrible draw. Hosting Delaware in the 1st round and then sent up to possibly cold, snowy Hamilton, New York in Round 2 against Colgate…. yikes. And the reward for winning both games is a trip to the Fargodome and the undefeated Bison.

Kent: The toughest road to the title has to be the NDSU bracket. Many considered Kennesaw State a Top 2 or 3 team but got bumped to a 4 seed. Also, having James Madison looming assuming it can get by a road game at a tough Colgate team very well could mean NDSU has to get by Montana State in the second round, James Madison in a championship rematch in the quarterfinals and either Kennesaw or a rematch possibly against SDSU in the semifinals.

Chuck: How upset must Delaware fans be right now? If they were to make a run to the FCS playoffs, they’d have to go through James Madison, Colgate and North Dakota State – all on the road! It’s crazy Delaware would have to play three road games like that.

Jamie:Eastern Washington not only gets a 3 seed, they get the Nicholls/San Diego 1st round winner. Whoever warm-weather team wins will have to travel up to the frozen red turf of Roos field.

Kent: The easiest road looks like Weber State. The Wildcats get the winner of Stony Brook or SE Missouri State in what looks like a toss-up. Then it likely will see Maine, who will have to travel 2/3rds across the country and then looks like it would have either Eastern Washington or UC Davis in the semi-finals–two teams that like to throw the ball and the conditions in Ogden may not make passing real easy.