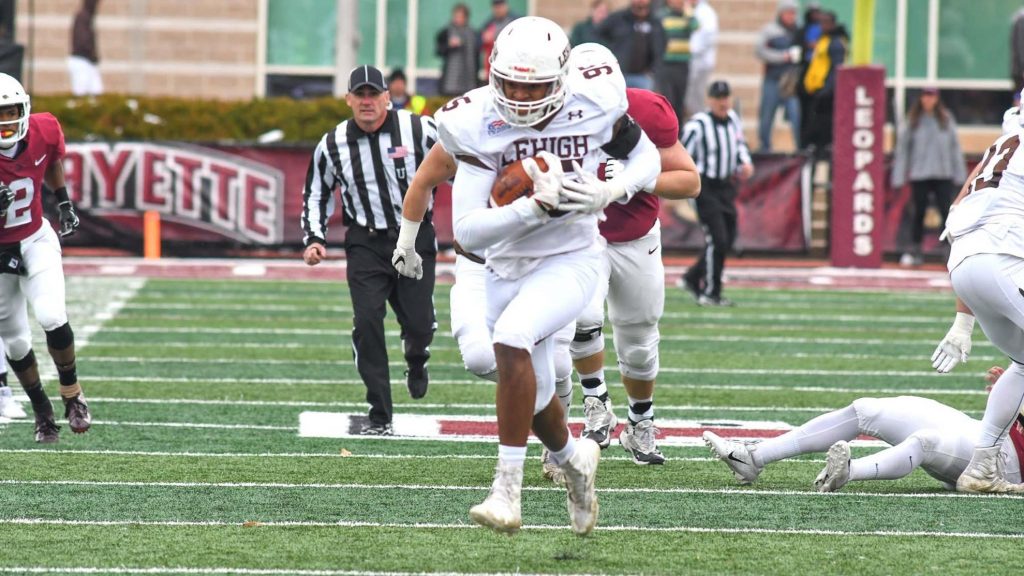 Christmas isn’t for another month, but for a day, people associated with the Lehigh football program felt like they’d received a bunch of presents.

The first present from the gods of football might have been the one that set the tone the best for Lehigh’s 34-3 win over their archrivals in the 154th meeting between them and Lafayette.

Rarely do Rivalry games hinge on one singular play, and one singular swing of emotion, but they did this weekend.

It is there where the Christmas Story of the 154th meeting between Lehigh (3-8, 2-4) and Lafayette (3-8, 2-4) was set in motion – from the very first offensive play from scrimmage by the Leopards.

Lehigh came out in a four-man defensive front, with DE Julian Lynn lined up on the right and “Hawk” DE Davis Maxie on the left. It was a standard four-man rush, with linebackers falling back to cover the short pass, and Lynn beat his man on the inside, attacking QB Sean O’Malley from his blind side.

As Lynn’s oustretched arms made contact with the Leopard QB, the ball squirted out of O’Malley’s grip, falling almost perfectly into the arms of Maxie, who had the ball and forty yards of uninterrupted green in front of him.

“It was like a present,” a giddy Maxie said afterwards, looking like he did, indeed, receive a present in the press conference. “It just floated into my hands. I would have had to move my hands to drop it. I had a flashback to the good old days when I was a TE at St. Andrews [in Boca Raton, Florida].”

Defensive coordinator Donnie Roberts, who got exactly what he wanted on this Lehigh Christmas day, was so excited that he bumped into an official on the field during the play, resulting in a 15 yard penalty and a sideline warning.

“I didn’t think I was too far out on the white [sideline barrier] and I thought the official could avoid me, but I guess I’m too big for him to avoid me,” Roberts said. “I was excited because I saw a senior defensive lineman get a strip and another defensive end get it and go. I tried to control my emotions the rest of the day.”

After Maxie’s touchdown put Lehigh up 7-0, Lafayette never really seemed to recover from the stun of that play.

After getting a 20 yard field goal by senior PK Ed Mish after a 12 play, 78 yard drive, the Mountain Hawks would get another present off of Lafayette’s next possession, after a high snap on a punt resulted in the ball getting spotted for a Lehigh drive starting at the Leopard 1/2 yard line.

That stocking stuffer allowed for an easy score for the record-setting RB Dominick Bragalone to help Lehigh jump out to a 17-0 lead, his first touchdown of the day.

The presents just kept coming for Lehigh – a blocked field goal attempt by junior FS Riley O’Neil, which almost got coach Roberts in trouble again; a Lafayette pass attempt that was at the exact right place for a touchdown, but the receiver couldn’t hold onto it; and a fumble on a punt return after Lafayette had stopped Lehigh’s opening drive to start the second half. DB Marquis Wilson pounced on the ball, and the Mountain Hawks, once again, got to tear open some wrapping paper.

After getting pretty much everything they wanted, the workmanlike Bragalone seemed to pound at Lafayette’s front line for just a few yards every play, but followed his blocks perfectly off the left side this time to help make the score Lehigh 24-3.

Another day at the office for Dominick Bragalone @D_B_lll_32 pic.twitter.com/zTHo50Gf97

Bragalone, who was celebrating his 22nd birthday on this day, will probably be buying his offensive linemen some presents after paving the way for him to run for 95 yards and 3 touchdowns, with Lafayette seemingly making every yard very hard to get.

“I played in a lot of tough games with tough yards, but this is probably one of the toughest,” the South Williamsport, PA native said. “The type of running back I am, I know it’s not going to be easy sometimes. I just try to take it one play at a time, lower my shoulder and run through people. I knew it was going to be tough to run against Lafayette, but the offensive line did an great job helping me get into the end zone three times. Everyone on the offense did their job.”

Meanwhile, the defense kept shutting down the Leopards drive after drive, holding Lafayette to 234 total yards and putting them consistently in bad positions all game. When senior CB Donavon Harris reached up to intercept a pass in the 3rd quarter, it was Lehigh’s third forced turnover of the day, to go with the blocked field goal.

Harris with his second interception of the season puts Lehigh back on offense. #GoLehigh #Rivalry154 pic.twitter.com/ns6MqoBqYT

“When we play defense, it’s all about energy,” Harris said. “We brought that and set the tone from the very first play. After they got the field goal, we didn’t want to let up any more points from that point on.”

The trick, Harris said, was to try to dial down in the second half some of the chippiness that defined the first half. Like two brothers fighting over a favorite toy, both teams were flagged for numerous unsportsmanlike penalties during the course of the game, some offsetting to negate positive yardage.

“Coach [Roberts], he brought us up, and said you have to keep a level head,” the Burlington Township, New jersey native said. “‘Whatever happens on the sidelines, happens,’ coach said, but as the Lehigh football team, we need to stay disciplined.”

After Harris’ big interception, it was the job of senior QB Brad Mayes, senior WR Luke Christiano, and the rest of the offense to make sure that important records were set, like the all-time scoring record, the rushing touchdown record, and most importantly head coach Andy Coen‘s 85th head coaching victory, the one that would tie him with head coach Bill Leckonby as the winningest coach at the school.

Mayes would find Christiano for a critical first down, and connect with sophomore WR Jorge Portorreal on another huge first down conversion, while Bragalone would grind out extremely tough yards – and the clock.

From 1st and goal at the 7, there was little doubt that the ball was going to go to Bragalone. Lafayette made him earn every yard, three yards, then two, then finally the two yard run that clinched the best birthday present ever – a perfect 4-0 record against Lafayette.

Another record for Bragalone!! The one-yard rushing TD makes him the career points scorer for Lehigh. #GoLehigh pic.twitter.com/0YpZlkgYig

It was a tough, trying season for the Mountain Hawks, a season where nobody got everything they wanted. In many ways, it was disappointing.

But for one, glorious Christmas Rivalry day, this set of Lehigh seniors earned some great gifts they were looking for to finish out the season right, and in the process set the table for success in the offseason and the years to come.

A lot of words are said in football about legacy and making your mark, but at Lehigh, going 4-0 against Lafayette is an important one that will ingratiate themselves with Lehigh people the rest of their lives. That’s an achievement that can’t be re-gifted to anyone else. It is theirs.