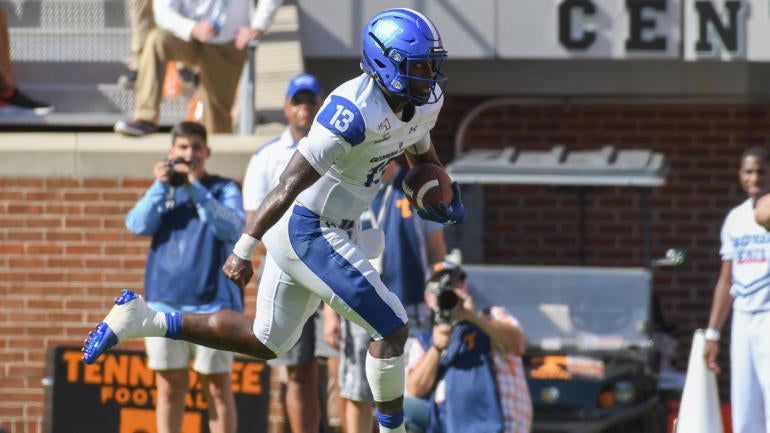 Five players including Dan Ellington from Georgia State, Mike Glass III from Eastern Michigan, Bryce Huff from Memphis, Alijah Halliburton from Wyoming, and Brandon Talton from Nevada have been selected as the College Sports Journal All-Stars for the week ending Sept. 2, 2019 from the NCAA Division I FBS Group of Five schools.

Dan Ellington, QB, Georgia State, Sr., Olive Branch, Miss.
Ellington threw two touchdown passes and ran for the game-clinching score in the fourth quarter, giving Georgia State its first-ever win over a Power 5 opponent.
He led the Panthers on two 75-yard touchdown drives in the second half to give GSU a 28-23 lead with nine minutes left, and then he scampered for a spectacular 22-yard touchdown run with 4:45 left that essentially clinched the win. He passed for 139 yards on 11 completions and rushed for 61 yards in the historic victory.

Mike Glass III, QB, Eastern Michigan, Sr., St. Louis, Mo.
Glass had a nearly perfect game, throwing 20-22 (90.9%) with three touchdowns in a 30-23 win over Coastal Carolina. His completion percentage was a new Eastern Michigan single-game record in the statistical era and currently ranks as first in the FBS. Glass started off his afternoon completing seven of his first eight passes, including a 11-yard pass to Dylan Drummond for the Eagles’ first score. Glass added touchdown passes of 19 yards and 32 yards, respectively, and rushed for a two-yard TD. In all, Glass accounted for four Eagles touchdowns, throwing for 188 yards in the season-opener.

Bryce Huff, DE Memphis, Sr., Mobile, Ala.
Huff had five tackles, including 2.0 tackles for loss and sack that produced a key safety in Memphis’ win against Ole Miss. Huff led a Tiger defense that limited the Rebels to 173 total yards, while his safety came with 6:27 left in the fourth quarter, giving Memphis a 15-10 lead that stood as the winning margin.

Alijah Halliburton, S, Wyoming, Sr., Aurora, Colo.
Halliburton helped lead Wyoming to a 37-31 victory over Missouri–the Cowboys first victory over a Power 5 opponent since 2008. He recorded a career high 17 tackles. He also recovered a fumble at the Cowboys nine-yard line returned it 79 yards, setting up a Cooper Rothe field goal to end the first half and extend the Wyoming lead at the time.

Brandon Talton, K, Nevada, Fr., Vacaville, Calif.
Talton hit a game-winning 56-yard field goal as time was expiring to lead Nevada to a 34-31 victory over the Big 10’s Purdue. The game-winning field goal was the longest walk-off kick in Mountain West history. Overall, it is tied as the fourth-longest kick in league history. He was a perfect 6-for-6 for the game, including four PATs and two field goals. He was playing in his first colligiete game and was playing as a walk-on player but was rewarded with a scholarship following the winning kick.