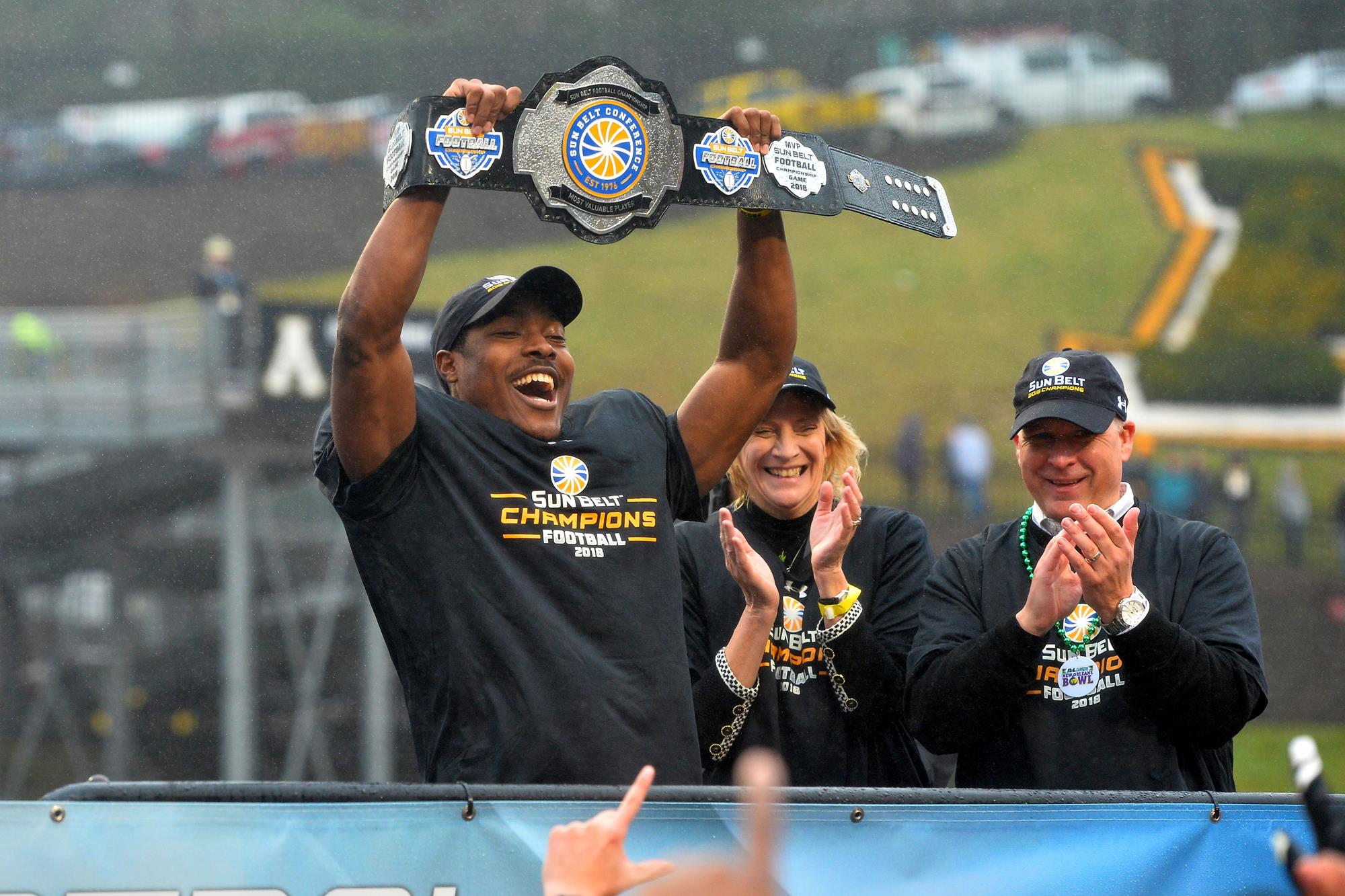 Five players including Darrynton Evans from Appalachian State, JoJo Ward from Hawai’i, Xavier Jones from SMU, Chandler Kryst from Coastal Carolina, and Matt Araiza from San Diego State have been selected as the College Sports Journal All-Stars for the week ending Sept. 9, 2019 from the NCAA Division I FBS Group of Five schools.

Darrynton Evans, RB, Appalachian State, Jr., Oak Hill, Fla.
Evans’ career-high 234 rushing yards (on 19 carries), 298 all-purpose yards and four touchdowns (three rushing, one kick return) propelled the Mountaineers to a 56-41 win over Charlotte. The junior’s 234 rushing yards and 298 all-purpose yards were the most by an NCAA FBS player so far this year, while his rushing total was the fifth-highest in school history for a game with less than 20 carries. His 87-yard touchdown on the first play from scrimmage was a career-long run, the fourth-longest in the nation this year and the fifth-longest in school history. Evans’ other three scores each came immediately after second-half Charlotte touchdowns to keep Appalachian State at least a touchdown ahead each time. After two games, Evans tops the nation with 166.5 rushing yards per game.

JoJo Ward, WR, Hawai’i, Sr. Waco, Tex.
In the 31-28 Hawai‘i victory over Oregon State, set career highs in receptions (10), receiving yards (189) and receiving touchdowns (4). The four receiving touchdowns tie a single-game Mountain West record. He had three of those in the first half alone and the fourth tied the game at 28-28. For the game, he averaged 18.9 yards per reception.

Xavier Jones, RB, SMU, Sr., Spring, Tex.
Jones rushed for 127 yards and three touchdowns on 16 carries to lead SMU to a 49-27 win against North Texas, improving the Mustangs to 2-0. Jones scored on touchdown runs of 24, 10 and 51 yards, turning in his second straight game with three touchdowns.

Chandler Kryst, DB, Coastal Carolina, Sr., Tega Cay, S.C.
Kryst matched his career interceptions total over his first four years in just one night with two picks in the road win at Kansas. Kryst, who joined a small company of Chanticleers to record two interceptions in the same game, ended two of the Jayhawks’ offensive series in a tight contest. Kryst and the Coastal Carolina defense held Kansas, which was averaging 241 passing yards per game entering the game, to just 107 passing yards and an average of only 5.6 passing yards per reception. Kryst’s first interception came in the second quarter with the Chants trailing 7-0. Kryst picked off a pass on Coastal’s own four-yard line as Kansas looked to double its lead. His second interception of the game came in Kansas’ first possession of the second half with the Chants down 7-6. He returned it 25 yards to help set up what would prove to be the game-winning touchdown on the next offensive series. The win over the Jayhawks is Coastal’s first-ever win over an Autonomy Five conference school (1-7).

Matt Araiza, K, San Diego State, Fr., San Diego, Calif.
Araiza accounted for 11 points, making three field goals and two PATs as San Diego State secured a 23-14 road win at UCLA. The three made field goals were a career high and he hit his career-long 43-yarder in the first quarter, while also recording makes from 31 and 25 in the second half. In kickoff duty, registered five touchbacks on six kicks.