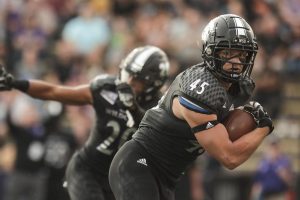 JaJuan Lawson, QB, Rhode Island, R-Jr., Petaluma, CA
In Saturday’s wild 56-49 loss at Connecticut, Lawson accounted for 436 yards of total offense and six touchdowns. The senior completed 23-of-34 passes for a career-high 351 yards and four touchdowns. He also ran for a career-high 85 yards and two touchdowns, one of which came on a career-long 37-yard rush. It was the second straight week that Lawson has thrown touchdown passes to four different receivers.

Marquis Terry, RB, Southeast Missouri State, Sr., Atlanta, GA
Terry broke SEMO and OVC single-game records in both rushing (311) and all-purpose yards (438) in the Redhawks 48-44 victory over rival Southern Illinois. He carried the ball 30 times (10.4 ypc) and scored four touchdowns on runs of 74, 23, 11 and 10 yards. He broke the OVC record of 310 yards set by Murray State’s Steve Chaney in 2005. The 311 yards mark the most by a player at any level of NCAA football this season. The Atlanta, Georgia native also caught one pass for 13 yards and returned five kickoffs for 114 yards, surpassing the former OVC all-purpose yardage record of 399 set by Austin Peay’s Kentel Williams in 2016. The 438 all-purpose yards are the most by a NCAA football player this year (no other player has reached 400 yards and no other FCS player has gained 300 yards). Landon Stice, LB, Weber State, Sr., Stansbury Park, UT
Stice did a little of everything on defense in helping Weber State beat South Dakota 27-10. He recovered a fumble in the first quarter and returned the ball 28 yards for a touchdown to put the Wildcats up 11-0. In the second half, he had an interception, which he returned 28 yards. All in all the Stansbury Park native recorded six tackles, a half sack, a half tackle for loss, a fumble recovery for a touchdown, an interception and a quarterback hurry.

Derek Ng, PK, Holy Cross, Fr., Las Vegas, NV
The true freshman from Las Vegas kicked a clutch, game-winning 45-yard field goal in overtime to help Holy Cross defeat defending Ivy League champion Yale 31-28. In addition to the game-winner, he made all four of his extra point attempts, including one with 52 seconds remaining in the game to tie the score at 28.