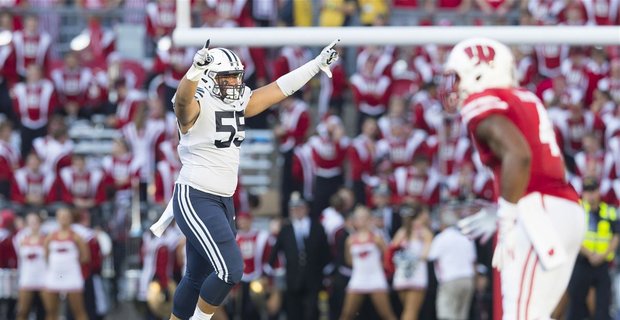 The two biggest wins that affected the FBS Group of Five Power Poll for Week 3 have to be BYU’s win over #6 AP ranked Wisconsin and San Diego State’s home win over another AP Top 25 ranked Arizona State.

The other big story was the loss of three games within the Top 20 being missed due to Hurricane Florence with UCF, Appalachian State, and Marshall all missing out on a Week 3 game.

BYU of course was the biggest riser this week in my G5 Power Poll and just one team dropped out in Eastern Michigan with the team that beat them in Buffalo taking its place.

The Knights game at North Carolina was lost to a hurricane and was the second straight season UCF lost out on a game due such a storm. Is it an omen for another undefeated season by losing a game? This week the Bulls get the G5 game of the week on Friday night against in-state out-of-conference rival Florida Atlantic in what very well could tell us which team ends up in a New Years Six bowl game.

USF erased a 12-point fourth quarter deficit with 18 unanswered points and extended its winning streak against Power Five foes to five straight with a 25-19 victory over Illinois at Soldier Field. WR Darnell Salomon completed the comeback with a 50-yard touchdown catch on a pass from QB Blake Barnett with 2:24 remaining after starting the fourth quarter with a 14-yard touchdown reception. This week, USF starts the AAC slate with East Carolina visiting Tampa.

The Mountaineers game at home with Southern Miss was cancelled due to Hurricane Florence and will not be made up. App State should get a nice tune-up game with Gardner-Webb this week before starting Sun Belt play next week.

QB Desmond Ridder threw three touchdowns and the Bearcats scored on their first six possessions to topple FCS Alabama A&M 63-7 last week. Ridder completed nine of 10 passes for 199 yards and added a 22-yard run for his first career touchdown. He was finished for the game after the first quarter. Cincinnati will have a bigger challenge this week with in-state out-of-conference rival Ohio comes to town.

Devin Singletary scored four rushing touchdowns in the first quarter alone, towards a school record of five on the night, and the Florida Atlantic upended FCS Bethune-Cookman 49-28 last week. FAU will get its chance to get back in the New Year’s Day Six bowl talk should it win at UCF this week.

SDSU shredded the nation’s leading defense against the run, rushing for 311 yards on 58 attempts after ASU entered the contest yielding just an average of 32.5 yards in its previous two games. RB Juwan Washington recorded a game-high 138 rushing yards on 27 carries with one touchdown to highlight the offense. Next up is Eastern Michigan at home for the Aztecs and likely can not overlook the Eagles before its big showdown with Boise State next week.

The Black Knights delivering a huge fourth-quarter stop to take down undefeated Hawai’i, 28-21 last week. Army ended the Rainbow Warriors’ unbeaten streak, which stood at three-straight games heading into Saturday’s contest. With the win, Army shifts to 2-1 on the year. QB Kelvin Hopkins Jr. led all Army ball carriers with 110 yards and a pair of scores on 20 carries. Army will need to really up its game this week though with a trip to Norman, Oklahoma to face the Top 5 AP ranked Sooners this week.

QB Malcolm Perry ran for 223 yards with three touchdowns and Navy rolled to a 51-21 victory last week over FCS Lehigh. The Midshipmen’s triple-option offense amassed 629 total yards. Navy gets back into AAC action this week with a trip to Dallas to play SMU.

The Cougars shocked the entire football community last week with the upset win over the Big 10’s Wisconsin. BYU went toe-to-toe with the Badgers with the defense making plays and holding on critical situations while the offense rattled off a few big plays to keep Wisconsin on its heels. The Cougars outgained the Badgers in yards per play at 6.1 to 5.5 and picked up two sacks and forced one turnover. Senior running back Squally Canada had 118 rushing yards with two touchdowns, including a pair of 40-yard runs. The Cougars get what seems to be a breather this week in an FCS opponent in McNeese State.

Boise State was one of few teams in the Group of Five that could not beat their Power Five match-up in its blowout loss at the Cowboys. The loss likely drops the Broncos out of the running for the New Year’s Day Six bowl game running unless it wins out and has no one else in the G5 winout. A bye this week will help repair the damage after this game before traveling to Wyoming to open Mountain West play next week.

RB Darrell Henderson rushed for a career-high 233 yards and two touchdowns in the Tigers’ blowout win over Georgia State. He became the first Tiger running back since 2005 to rush for 200 yards in two consecutive games. That streak could still be alive with South Alabama coming to town this week.

Led by senior quarterback Marcus McMaryion’s five total touchdowns on Saturday night at the Rose Bowl, Fresno State defeated UCLA 38-14 last week. The Bulldogs closed the game with 22-unanswered points during the final 24 minutes to earn their third-straight win over the Bruins. A bye week awaits the Bulldog this week before hosting the MAC’s Toledo next week.

The Mean Green were the second biggest leaper this week with its impressive win over the SEC’s Arkansas last weekend. UNT pretty well dominated in all three phases of the game against the Razorbacks. Now, the Mean Green get a road trip to Independent Liberty, who should not be overlooked despite it being its first season at the FBS level.

QB D’Eriq King for Houston threw for a career-high 431 yards and accounted for a career-best six touchdowns, but the Cougar defense could not seem to stop Texas Tech, who claimed a 63-49 win. The Cougars get one last tune-up game this week before AAC league play begins.

Toledo was the third Top 20 G5 team to lose to a P5 squad last week. The Rockets. QB Mitchell Guadagni’s arm and legs kept Toledo in the game in its matchup with Miami (FL) but ultimately the Rockets could not keep up the pace, falling to the Hurricanes, 49-24. Another tough game awaits the Rockets this week with the MWC’s Nevada visiting. Nevada beat P5 Oregon State last week.

Soph. QB Jordan Love passed for 236 yards and two touchdowns, and Jr. RB Darwin Thompson rushed for a career-high 107 yards and a touchdown as Utah State cruised to a 73-12 victory over Tennessee Tech. Mountain West play begins this week with Air Force coming to Login.

Hawai’i nearly rallied from a 14-point fourth-quarter deficit. However, QB Cole McDonald’s 4th-and-8 pass into the end zone was batted down as Army protected its seven-point lead in the final minute and give the Rainbow Warriors their first loss of the season. Hawai’i should be able to rebound to get its fourth win this weekend against visiting FCS Duquesne this weekend.

Marshall were the third team in our Top 20 to lose a game due to Hurricane Florence. While the Thundering Herd did not get to visit South Carolina last week, it will get another Carolina team in NC State this week but at home.

Ohio was had to play its game last week instead of on the road at Virginia but at a neutral site of Vanderbilt Stadium in Nashville. But even though it avoided the road, Ohio could not claim this one. A visit to in-state out-of-conference Cincinnati awaits the Bobcats this week in what should be a very good contest as UC is undefeated so far this year.

The Bulls enter our poll this week after defeating a former member of the poll in Eastern Michigan last week. QB Tyree Jackson had arguably the best game of his career, going 21-of-26 for 325 yard