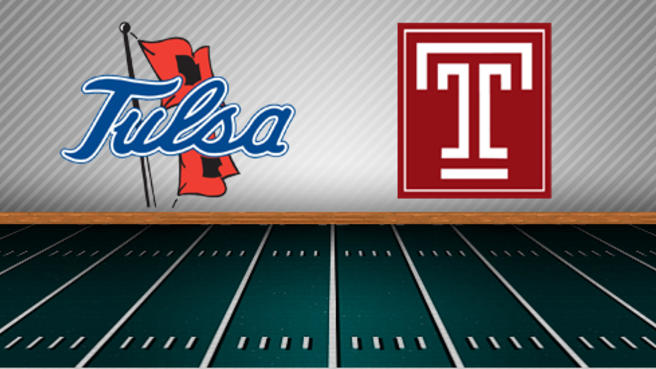 Trailing 27-7 in the third quarter, Tulsa (1-2) scored 13 points to bring the score to 27-20 with 11:13 remaining in the 4th period and after the defense had another critical stop of the Red Wolves, Tulsa took possession at its own 4-yard line. However, RB Keylon Stokes was caught behind the line of scrimmage in the end zone for an Arkansas State safety and a 29-20 lead with 7:56 remaining in the contest and the Golden Hurricane could not muster any further offense.

The lose took Tulsa down to 1-2 overall this season. And now it gets a road game to begin the AAC action.

Tulsa lost to Temple last year in the final game of the regular season with a final of 43-22. The series is tied 2-2 as the two teams have split on their home fields but Temple has won the only two where these two teams met in AAC play.

Key Player: QB Luke Skipper took the starting role away from Chad President midway through last season and entered 2018 atop the depth chart. Skipper has completed 61.3 percent of his passes for 521 yards and four TDs with three interceptions. He has also added 109 rushing yards and one score on 29 carries. The turnover bug will be the key for Skipper and Tulsa to stay in this game.

Fantasy Bonus Baby: Sophomore RB Shamari Brooks has also broken the 100 yard mark twice so far. Brooks has racked up 310 yards on 70 carries — numbers that rank second and fifth in the league, respectively — and has scored four touchdowns. Look for him to have another good performance in this one.

Temple bounced back in a big way Saturday with an impressive 35-14 win over previously unbeaten Maryland, 35-14 to notch the Owls first win. Temple dominated the game on both sides of the ball on their way to a huge road win against the Big Ten school. Temple finished with 80-plays for 429 yards compared to Maryland’s 52-plays for 195 yards.

With this being a Thursday game, both teams will open AAC play on a short week as both played last Saturday.

Key Player: QB Frank Nutile or Anthony Russo are both in line for this game. Nutile sat out the win over Maryland due to injury and Russo was magnificent in the win over Maryland. Russo threw for 228-yards and a touchdown on 15-25 passing last week. Nutlile, who is a senior, seems to be ready to return this week but it is uncertain what Temple will do. It will be key that whichever quarterback plays that he does not try to do too much.

Fantasy Bonus Baby: RB Ryquell Armstead rushed 26 times for 118 yards in the win last week over Maryland . That was his sixth career 100-yard rushing game and second of the season. Look for Armstead to get the ball a lot in this one and put up another 100-yard game.

Fearless Prediction: With last week’s results, the two teams are trending in opposite directions. Tulsa is coming off a 10-loss season and while it probably will improve, I can not see them getting its first win over Temple as a AAC member. Look for the Owls to win by a couple of scores. Temple 31, Tulsa 20