Five players including Sam Staub from Southern Illinois, Anthony Philyaw from Howard, Manusamoa Luuga from UC Davis, Dallas Brown from South Dakota State, and Lane Clark from Tennessee State have been selected as the College Sports Journal All-Stars for the week ending November 20th, 2016 in the NCAA Division I Football Championship Subdivision. 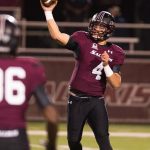 Straub set a school record with 450 yards passing in SIU’s 44-34 comeback win over No. 23 Western Illinois. Straub went 30-for-51 and had four touchdown passes in the comeback win. After SIU trailed 31-14 early in the third quarter, Straub went 13-for-23 for 259 yards and two touchdowns the rest of the second half to lead the comeback. Straub’s 450 yards passing broke a 10-year-old school record and ranks as the ninth-most prolific passing game in MVFC history. 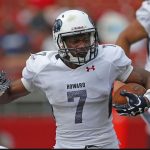 Philyaw rushed for a school-record 281 yards and two touchdowns, on 36 carries, in Saturday’s win 26-21 Delaware State. Philyaw reached the 1,000-yard mark when he capped off a 97-yard drive with a 45-yard rush on the offense’s opening drive. 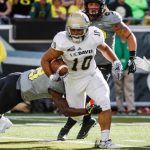 Luuga rushed for a career-high 249 yards on a career-high 38 carries, while helping set the tone with a 58-yard TD run through the left side on the Aggies’ first play from the line of scrimmage, as UC Davis earned a 48-30 win over rival Sacramento State. Luuga’s yards are the third-most for a UC Davis single game, and are 10th-most in the FCS this year, along with being second-most in the Big Sky. He added a 47-yard run in the fourth quarter. 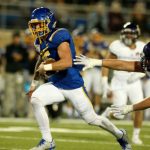 Brown made a number of big defensive plays in South Dakota State’s 45-24 victory over Northern Iowa on Nov. 19. He was credited with seven tackles, including a sack, as well as a forced fumble. He also factored into a pair of key takeaways, intercepting a pass at the goal line late in the first half and applying pressure that led to a 65-yard interception return for touchdown by Kellen Soulek in the closing minutes. Brown’s interception was his team-leading third of the season. 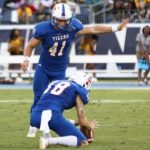 Clark kicked a pair of field goals and the game-winning extra point attempt with 16 seconds remaining to lift Tennessee State to a 32-31 victory at Southeast Missouri. Clark connected from 46 yards at the end of the first quarter before drilling a 49-yarder into the wind with one minute to play before halftime. Clark finished the season fourth nationally in field goals made/game (1.55) in addition to tying for an OVC long field goal (with TTU’s Nick Madonia) of 57 yards.