Four players including John Lovett from Princeton, Cooper Kupp from Eastern Washington, Desmond Johnson from Kennesaw State, and Darien Townsend from Youngstown State have been selected as the College Sports Journal All-Stars for the week ending October 30th, 2016 in the NCAA Division I Football Championship Subdivision. 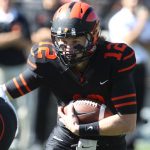 Lovett was as triple-threat in the Tigers’ 56-7 win over Cornell on Saturday, as he scored through the air, passing and receiving, as well as on the ground. In total, Lovett accounted for a Princeton single-game record seven touchdowns. As a passer, he completed 10-of-11 passes for 194 yards and four touchdowns; as a rusher he ran six times for 47 yards and two touchdowns; as a receiver he caught two passes for 19 yards and one touchdown. 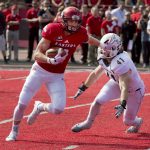 Kupp led the Eagles to a 35-16 win over No. 16 Montana Saturday.He caught eight passes for 140 yards, with three touchdowns. Kupp’s first touchdown came on a 69-yard bomb from quarterback Gage Gubrud. However, the Kupp-Gubrud connection wasn’t solely built on the sophomore finding the senior; instead, on an option play, Gubrud was the one who caught a 54-yard pass from Kupp. The pass nearly was a score, but led shortly to a EWU touchdown. In the game, Kupp went over the 1,000-yard receiving mark for the fourth consecutive season. His 1,006 yards and 67 catches this season would already rank 17th and 15th, respectively, in Eastern Washington history, and the marks are only through seven games. 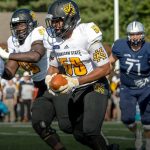 Johnson recorded a career-high nine tackles (six solo, three assisted) to lead Kennesaw State’s defense at Monmouth. He also had two forced fumbles, a fumble recovery for a 30-yard touchdown and a sack for a loss of six yards. His defensive score put the Owls ahead 21-3 in the second quarter. KSU would win the game 49-17 over the Hawks to improve their record to 6-2 overall and 2-2 in the Big South play. 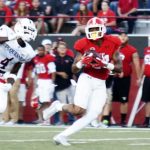 Townsend’s 79-yard punt return in the fourth quarter was the game-deciding score in the Penguins’ come-from-behind 13-10 victory over Indiana State. With around 9:30 remaining, Townsend caught a 62-yard punt by Indiana State’s Thomas Bouldin. He had two punt returns for 91 yards while catching two passes for 24 yards in the game.