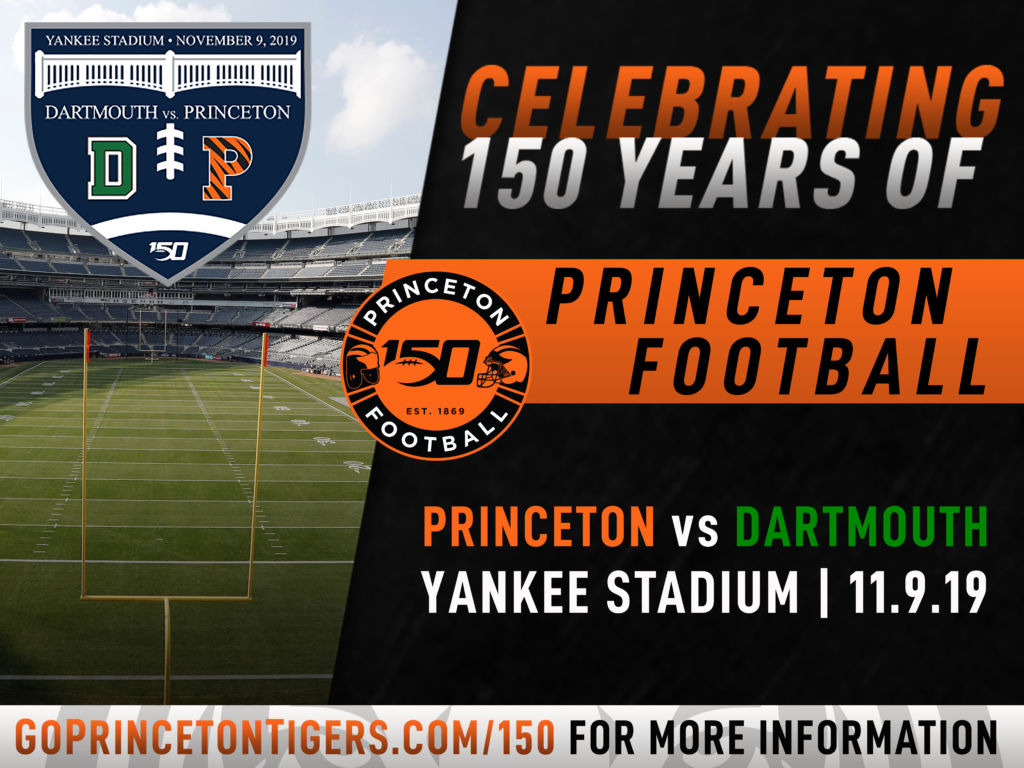 “Rutgers an Princeton began talking several years ago about a rematch on the closest Saturday to the anniversary,” he wrote. “Like the 1869 matchup, the game would be played at Rutgers. But Rutgers tried to lowball Princeton on the guarantee for playing on the road. In the midst of the negotiations, Yankee Stadium officials, who are always looking for offseason events — the building has hosted a number of college football games, including an annual second-tier bowl game since 2010 — approached the schools.

“Princeton head coach Bob Surace loved the idea. Initially, so did Rutgers, but with the athletic department in complete disarray, the idea fell apart.

“The Yankee Stadium people called and said, ‘We still want to do this, even without Rutgers,’ ” Surace said. “That’s when I called [Dartmouth head coach] Buddy [Teevens].” who, according to Feinstein, thought about it for two seconds before saying “yes”.

With a big game vs. Princeton left on the schedule, Yale is secretly rooting for Princeton to win this afternoon at Yankee Stadium, setting up a possible Ivy League title showdown next week in an obvious letdown spot in Princeton, New Jersey. Beating up on Brown will be a good tune-up for that purpose. Yale 41, Brown 22

The million dollar question I have for Columbia athletics is: Why not kick the game off at noon, or even 11:30AM? That might have given Ivy League hard-cores a chance to make this and the Dartmouth/Princeton game in the Bronx a Big Apply Ivy League doubleheader. Instead, this game might be still be finishing up as the big battle of unbeatens in the Lower Borough will be kicking off. It also takes the shine off of this matchup between two head coaches, Al Bagnoli and Tim Murphy, who have coached Ivy League football since, it seems, forever. Bagnoli will open some of his bag of tricks and surprisingly defeat a Harvard squad facing an enormous letdown after Buddy Teevens’ first answered “Hail Mary” for Dartmouth defeated Harvard last week on the final play of the game. Columbia 28, Harvard 21

I’m so old I remember when Cornell and Penn was an end-of-the-season Rivalry game for both schools, though it was hardly a fierce or intense one – it was more driven by necessity rather than fire. This game also feels similar, as Penn’s leaky defense will go up against Cornell’s sputtering offense. Penn should win, but like all their games this season, it will require a lot of points to do it. Penn 37, Cornell 28

Last year, this game was also a battle of unbeatens, one of the classics of the 2018 season and barely won by Princeton, 14-9, on a late 4th quarter drive. This year’s edition sees a new cast of players for both teams, but a similar type of game seems to be in the offing, as a another head coaching, physical chess match seems to be what to expect in the Bronx this afternoon. “These teams are not miles apart,” Surace said after the game last year, and the exact same could be said of these teams this time around, too. It should be another game where football lifers who love seeing offensive and defensive lines grind it out will enjoy themselves immensely. I think this time, late in the game, it’s going to be Dartmouth who makes that final play to come out on top. In that sense, the Big Green’s answered “Hail Mary” from last week will help propel Dartmouth to seem to be the Ivy League’s team of destiny this year, just as Princeton last year seemed to be that team. Dartmouth 16, Princeton 13