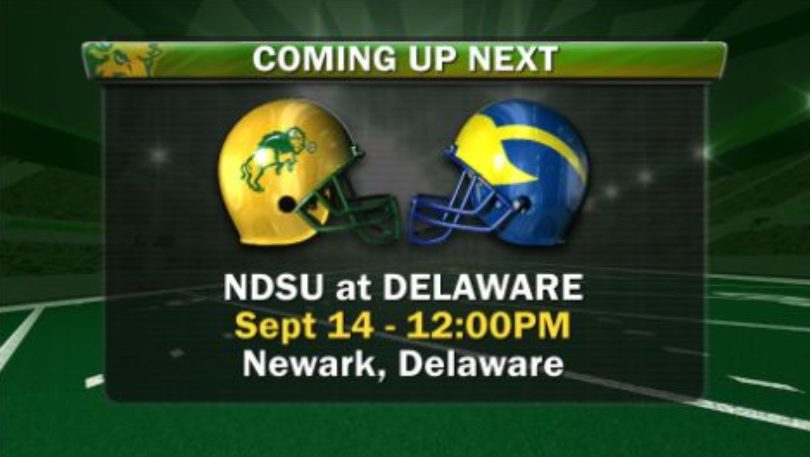 The Missouri Valley Football Conference did well in Week 2 as the league as a whole. The biggest win in the league was Southern Illinois’ 45-20 win at UMass. Te MVFC now has had at least one FBS win in each of the last 10 seasons. The MVFC recorded a 1-7 mark vs. the FBS last year. The Conference has 46 FBS wins in its history. There are nine MVFC-FBS games on the schedule this year, including one this week. The league is 1-6 against FBS programs so far this season.

But the biggest game this week is a cross-country game with North Dakota State visiting fellow Top 25 ranked Delaware out of the CAA. The two teams met in Fargo last year with the Bison winning 38-10 on homecoming last year. The Blue Hens threw interceptions on three of their first five possessions to help lead to the NDSU win.

BYE: Northern Iowa (1-1) is coming off a win at home over Southern Utah.

Coach Matt Entz brings in his FCS juggernaut for a true road game for the first time in his era. Through two games, the Bison show no signs of slowing down despite only seven starters back from last year’s undefeated national title team. NDSU trampled Butler in Week 1, 57-10, and in-state rival North Dakota last week, 38-7.

Saturday’s game at Delaware will be the sixth time the Bison play a game on the East Coast. NDSU played at Army in 1932, George Washington in 1932 and 1937, Shippensburg (Pa.) in the 1981 Division II semifinals, and Georgia Southern in 2006. The 1:00 EDT start time may be a factor in this game (although most FCS title games in the past have been this start time).

Key Player: LB Jabril Cox was a terror last year for the Blue Hens. The Blue Hens threw interceptions on three of their first five possessions including a 36-yard return for touchdown by Cox on Delaware’s first offensive play of the game that gave NDSU an early 14-0 lead. The Bison defense as a whole has been stellar again to start this season in giving up just 17 points in two games thus far. Cox and the rest of the defense will be key to limiting first downs and forcing some turnovers in this road game.

The Blue Hens rallied from a 13-0 halftime deficit to win last week’s triple-overtime thriller at CAA foe Rhode Island 44-36. Delaware defeated in-state foe Delaware State 31-13 to open the season. Delaware did not score a first-quarter touchdown in the season opener and produced a scoreless first half at Rhode Island.

Last year’s game against the Bison in Fargo saw the Blue Hens down 28-0 after the first quarter. Delaware will need to overcome the opening game lull and will need to score to stay in this game. But elaware has defeated the #1 ranked team in the polls five times previously so they have a history of taking down a top ranked team.

Key Player: QB Pat Kehoe waited his turn before earning the starting job in 2018. This year in his senior campaign, he has shown signs of a star performer. He has thrown seven touchdown passes through two games and was outstanding in the second half versus Rhode Island last week. The key for the Blue Hens will be for him to start off great and not be lackluster in the first half like he was last week when he had to bring Delaware back from a 13-0 halftime deficit.

Fearless Forecast: The home field will help the Blue Hens and the fact NDSU has to travel across the country for this game but don’t think it will be enough. The Bison are too strong on both sides of the ball and would take a number of turnovers to lose this game. The game will be closer than last year but still not too close. NDSU 38 Delaware 20 Illinois State at Eastern Illinois | Charleston, Ill. • 2 p.m. [ESPN+ (subscription required]
The Redbirds handled Morehead State last week and now get Mid-America Classic EIU this week on the road. The Redbirds will be test but will handle the Panthers. ISUR 34 EIU 26

Eastern Kentucky at Indiana State | Terre Haute, Ind. • 1 pm ET [ESPN+ (subscription required]
The Sycamores were the disappointment last week in the MVFC with its home loss to the Pioneer League’s Dayton. EKU should be a step up in competion this week but ISU will learn its lesson. ISUB 42 EKU 31

Missouri State at Tulane | New Orleans, La. • 7 pm CT [ESPN3 (subscription required]
In past years, Tulane would be considered a good candidate for a FCS loss but not this year. The Green Wave roll in this one. Tulane 38 MSU 10

Houston Baptist at South Dakota | Vermillion, S.D. • 2 pm CT [Midco/ESPN3 (subscription required]
The Coyotes are coming off a blowout to Top 5 FBS ranked Oklahoma last week and are 0-2 to start the season. This is really a must win to stay in playoff contention later in the season and the Coyotes get it done over the Southland Huskies. USD 31 HBU 17

Drake at South Dakota State | Brookings, S.D. • 1 pm CT [Midco/ESPN+ (subscription required]
This game was originally scheduled as a road game for the Jackrabbits but bought out the Bulldogs for another game in Brookings. SDSU rolls in this one. SDSU 38 Drake 10

UT Martin at Southern Illinois | Carbondale, Ill. • 6 pm CT [ESPN+ (subscription required]
The Salukis are coming off the high of the win at FBS UMass last year and hope to continue the momentum in the SIU home opener. They will do just that. SIU 41 UTM 21

Montana State at Western Illinois | Macomb, Ill. • 3 pm CT [ESPN+ (subscription required]
In past year’s this Big Sky-MVFC match-up would have been the game of the week but the Leathernecks appear to have taken a step back with several new starters. Montana State is too strong and will hand WIU a home loss. MSU 31 WIU 20

Duquesne at Youngstown State | Youngstown, Ohio • 2 pm ET [ESPN+ (subscription required]
Youngstown State lost to Butler last year and that same kind of feeling is around for the visiting NEC foe in Duquesne. Coach Bo Pelini will have the Penguins ready this year and avoid the upset but might be closer than some might expect. YSU 31 Duquesne 27