Five players including KD Humphries from Murray State, Dallas Goedert from South Dakota State, Brad Mayes from Lehigh, Ryan Francis from VMI, and Lane Clark from Tennessee State have been selected as the College Sports Journal All-Stars for the week ending October 2nd, 2016 in the NCAA Division I Football Championship Subdivision. 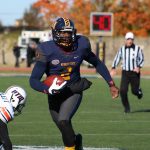 KD Humphries, Murray State, QB, Sr., Montgomery, AL
Humphries completed an OVC record 49 passes (in 60 attempts) to account for 455 passing yards and five touchdowns while also rushing for another touchdown as Murray State topped Austin Peay 45-17 for its first victory of the season. The 49 completions broke the league record Humphries himself set against Tennessee Tech in 2014. The senior completed passes to 11 different receivers including throwing three touchdown passes to Jordon Gandy. Humphries had touchdown passes of 9, 15, 10, 9 and 12 yards while his rushing score was a 10-yarder to begin the third quarter (and put his team up 31-10). His 49 completions are the most by a FCS player this season and he is currently the only FCS quarterback to throw for at least 450 yards, pass for five touchdowns and complete at least 40 passes in a single game in 2016. 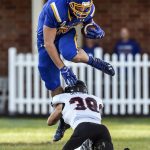 Goedert tied a school record with four touchdown receptions and also established new career highs with eight total receptions and 204 receiving yards as the Jackrabbits opened league play with a 52-14 home victory over Western Illinois on Oct. 1. He scored SDSU’s first three touchdowns – all in the first half – on plays of 24, 25 and 24 yards. His fourth touchdown covered 70 yards and tied the school record. Goedert’s 204 receiving yards marked the sixth-highest single-game total in program history. He has now caught a touchdown pass in all four games this season and five in a row dating back to the 2015 campaign. 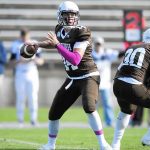 The sophomore quarterback set a Lehigh single-game record with 524 passing yards and tied a program record with six touchdown passes, while stepping in for a prior CSJ player of the week this year in Nick Shafnisky. Mayes led the Mountain Hawks to 63-35 win over Yale on Oct. 1. Mayes’ completed 33-of-46 passes, also setting a Yale Bowl record, as the Mountain Hawks racked up 651 yards of total offense in leading the team to its third straight victory. 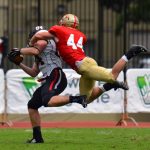 Ryan Francis tallied a career-high 16 tackles in VMI’s 23-17 triple-overtime win at Bucknell on Oct. 1. Francis was credited with 14 solo stops in the win. The junior added two sacks, four tackles for loss and a pass break-up. Francis came up with a tackle for loss on third down in the second overtime period, which forced Bucknell to attempt a 42-yard field goal that was missed. The senior ranks second in the league with 11.0 tackles per game, is tied for first with 6.5 TFLs and is tied for third with 3.0 sacks on the season. 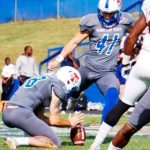 Clark set the Tennessee State school record for longest field goal twice against UT Martin, hitting a 54-yarder in the second quarter and a 2016 NCAA-best 57-yarder with 7:27 to play as the Tigers won 34-30. The 57-yarder is the longest in any level of NCAA football this season (FBS, FCS, Division II, Division III) and the longest in the OVC over the past 15 years. Clark also added four PATs to account for 10 total points and had a pair of touchbacks on kickoffs. Clark currently ranks fifth nationally in field goals/game (1.50) and 29th in scoring (8.8 points/game).