Four players including Hunter Taylor from Stephen F. Austin, Derrick Craine from Chattanooga, George Odum from Central Arkansas, and Taylor Hintze from Weber State have been selected as the College Sports Journal All-Stars for the week ending September 25th, 2016 in the NCAA Division I Football Championship Subdivision. 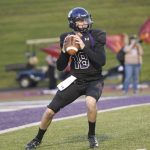 Taylor set careers highs with 376 passing yards and four touchdowns with no interceptions in Stephen F. Austin’s 41-30 win over Southland Conference mate Abilene Christian. The senior completed 31 of 46 passes and had touchdowns of 37, 18, seven and three yards. Taylor also rushed for 16 yards to give him 392 yards of total offense on the night. This marks the third consecutive game in which Taylor entered the contest and led the Lumberjacks to a win. 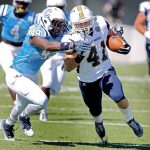 Derrick Craine rushed for a career-high 222 yards on 23 carries with two touchdowns as Chattanooga topped Samford, 41-21, Saturday afternoon. Craine’s 222 yards was the third-highest single-game total in school history. The senior was especially efficient in the second half, carrying 14 times for 194 yards after intermission. He added two receptions for nine yards in the win. Craine leads the Southern Conference and ranks 10th nationally with 114.3 yards per game. With Saturday’s performance, he moved into eighth place on the school’s all-time rushing list and now has 2,371 yards for his career. 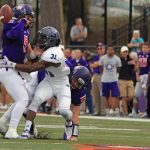 Odum was an integral part of the Central Arkansas defense that limited Arkansas State to just 45 rushing yards on 34 attempts in the Bears’ 28-23 win over the Red Wolves. The junior did it all with 11 total tackles, including three for loss, two sacks and two forced fumbled. Odum forced a fumble on Arkansas State’s next-to-last possession that allowed the Bears to hold on for the win. 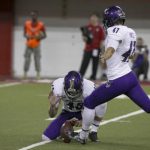 Hintze made a 54-yard field goal as time expired in the second quarter, which was the third-longest field goal in Weber State history to give the Wildcats a 38-35 win over Big Sky mate UC Davis. After a stunning turn of events left the Wildcats with the ball late, Hintze drilled a 35-yard attempt, giving Weber State a 1-0 start to the conference season. Hintze also made a 37-yard attempt early in the fourth quarter.