It is said that more things change, the more they stay the same.

That rings true in the Pioneer Football League as San Diego looks to finish atop the league standings when the season concludes Nov. 23. If the Toreos do reach that pinnacle it will be a repeat of 2018. And 2017. And 2016.

Drake entertains Dayton in the biggest game of the week in the PFL. A win by the Bulldogs would keep the pressure on San Diego for a fourth straight league title, while a loss would all be assure the Toreos of the outright crown.

The four teams currently sitting in the middle of the pack in the conference standings figure to all remain there, while imply jostling for position depending on the outcome of the rest of the slate.

Drake Stadium, with its famed blue oval, is home to the most prestigious track and field event each year. For one day this season the stadium, which seats more than 14,000 fans, will be the site of one of the most important games in the Pioneer Football League.

Drake and Dayton square off Saturday in what figures to be a heavyweight match as both teams are battling to keep pace with league leader San Diego near the top of the PFL standings.

A win by the homestanding Bulldogs will improve them to 6-1 in league play, one game behind the Toreros. A loss would leave the Bulldogs and Flyers tied at 5-2 in the league with one game remaining on the schedule. 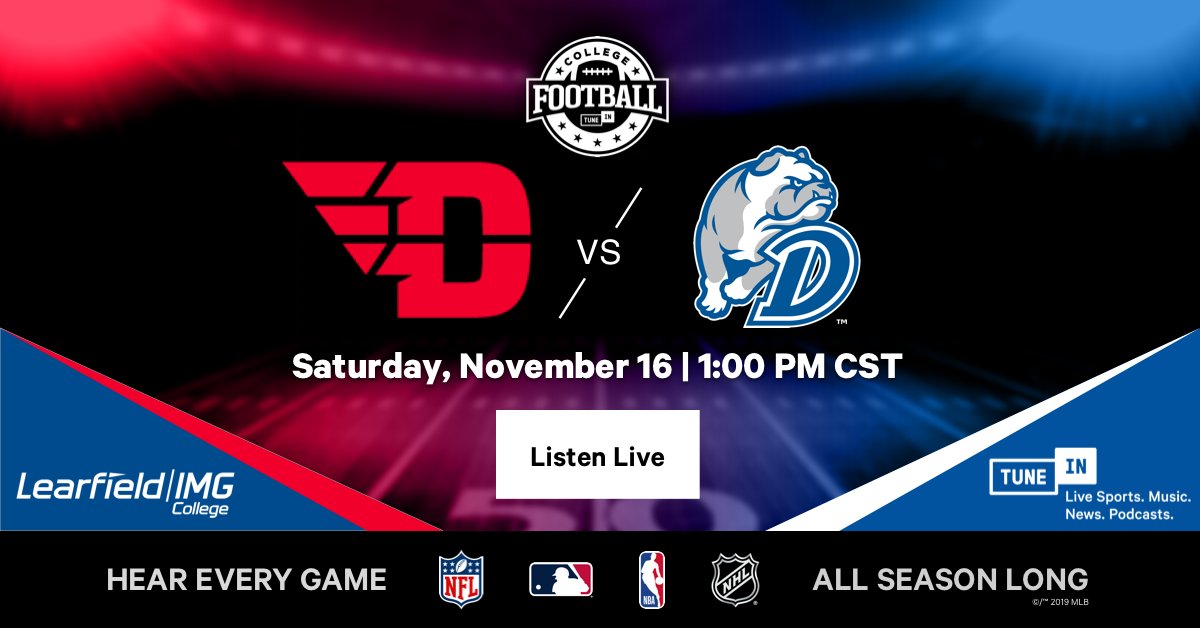 Dayton brings an offense that is averaging 454.1 yards per game into Saturday’s feature marquee. The Flyers are unlike many of their conference opponents in that they like to spread the ball around. The passing game is accounting for 247.9 yards per game, while UD is averaging 206.2 yards per game via the run. Drake, however, is allowing fewer than 188 yards in both categories, and that could help determine the winner on Saturday.

Key players: Jack Cook has accounted for more than 2,600 yards of total offense for the Flyers. He has completed 158 of 258 passes for 2,231 yards and an impressive 29 touchdowns on the season. He has been protective of the ball as well. Cook has been intercepted just five times on the year. He has also rushed for 379 yards on 83 carries (4.6 ypc) and added nine more scores for the Flyers. He ranks second on the team in rushing behind leader Jake Chisholm, who has 821 yards on 107 carries (7.7 ypc) and a good day for Chisholm could allow him to gain the necessary 171 yards needed to reach 1,000 for the season.

Adam Trachman and Ryan Skibinski have combined to catch 95 passes for more than 1,400 yards Dayton. Trachman leads that tandem with 57 catches for 755 yards and 13 touchdowns, while Skibiniski had chipped in with 655 yards on 38 receptions.

Drake is hoping to end a drought of PFL titles. The last time the Bulldogs finished ahead of the rest of the league was 2004 when they won the crown with perfect 4-0 record in the North Division and finished 10-2 overall.

The Bulldogs also distribute the ball evenly but, appear to rely heavily on ball control. They are averaging 335.7 yards of offense this season. Most off that output comes through the air where Drake has put up 188.9 yards per game as compared to 146.8 yards on the ground.

This one could come down to defense. If Drake can keep the ball out of the hands of Dayton, it would prevent the Flyers from reaching their average of 41.2 points per game. The Bulldogs could capitalize that by controlling the clock and push to reach the average of 474.8 yards of offense being allowed by Dayton this season.

Key players: QB Ian Corwin has completed 142 of 247 passes this season for 1,649 yards and 16 touchdowns. He has been intercepted 10 times by the opposition. Drew Lauer leads the way on the ground with 894 yards on 182 carries (4.9 ypc) and has scored nine touchdowns for the Bulldogs. No other rusher has more than 194 yards so far this season for Drake.

San Diego has become a fixture atop the Pioneer Football league standings in recent years, complete with the Toreros’ 35-game conference winning streak.

They will be in that same familiar spot when they awake on Sunday morning. The Toreros may have some company that, but that remains to be seen.

San Diego looks to extend its seven-game winning streak this season with a win over visiting Morehead State on Saturday at Torero Stadium. The only two blemishes on this season’s record came in the first two weeks of the season. USD lost to Cal Poly 52-34 in the season opener and fell to UC Davis 38-35 in the second game of the season. Both of those teams are members of the Big Sky Conference.

Morehead State enjoys putting the ball in the air. San Diego thrives on doing the same.

The Eagles average 254.6 yards passing per game while the Toreos are compiling an average of 321.9 passing yards per contest.

USD QB Reid Stinnett is among the nation’s passing leaders. He has completed nearly 69 percent (197-287) of his tosses for 2,861 yards this season.

The quagmire that Davidson and Stetson find themselves in when looking at the PFL standings are almost certain to remain following Saturday’s slate of game in the league. Only the order will change.

If Davidson wins, the Wildcats assure themselves a winning record in league games. A win by Stetson will give both teams a 4-3 mark in the league heading into the final weekend of play.

Davidson enjoys putting the ball in the air as evidenced by the 328.8 average yards per game this season, while its running game is well behind with just under 112 yards per contest. But, a milestone could be reached this weekend for RB Wesley Duggar. He needs just 125 rushing yards to reach 1,000 for the season.

Stetson, meanwhile, is proficient in both running and passing the football. The Hatters average 241.4 yards on the ground and 212.8 via the pass. Their total offense of 453.8 yards per contest is slightly better than Davidson’s average of 440.6 yards per game. Stetson, which won all three non-conference games earlier this season pulls this one out in the end at home: Stetson 30, Davidson 27.

Sometimes there can be valuable lessons learned in defeat and if Butler emerges victorious in its annual Battle for the Hoosier Helmet against in-state rival Valparaiso, the Bulldogs might have to look back to the season opener against top-ranked North Dakota State.

The Bison rolled all over Butler, as they have most other teams this season, but Butler should have taken a few lessons in hard-nose, smash-mouth football in that 57-10 loss to NDSU in a game played at Target Field in Minneapolis.

The Crusaders and Bulldogs both struggle running or passing the ball with much efficiency. Scoring offense reflects those shortcomings. Valparaiso is averaging 15.2 points per game, while Butler is putting points on the board at a 17.6 per game clip. Both are allowing more than 33 points per game on the other side of the ball. Butler 21, Valparaiso 17.

A season that looked to have some promise earlier this season has taken a nasty downturn as Jacksonville has come out on the short end in each of its last six contests. The Dolphins have an opportunity to glean a bit of redemption as the PFL enters its next to final weekend of the regular season.

Marist will certainly have something to say about that as the Red Foxes look to move above .500 in league action when they play host to the Dolphins.

The visiting Dolphins rely heavily on running the ball. Passing the ball has been more problematic. Jacksonville averages 266.1 yards on the ground and just 77.5 through the air.

Marist has trouble stopping both.

The Red Foxes, who are averaging less than 95 yards per game on the ground, are allowing more than 203 yards on the ground to their opponents and even more (222.2) through the air.

Both teams are posting similar numbers in points scored and points allowed, but in the end: Jacksonville 24, Marist 21.