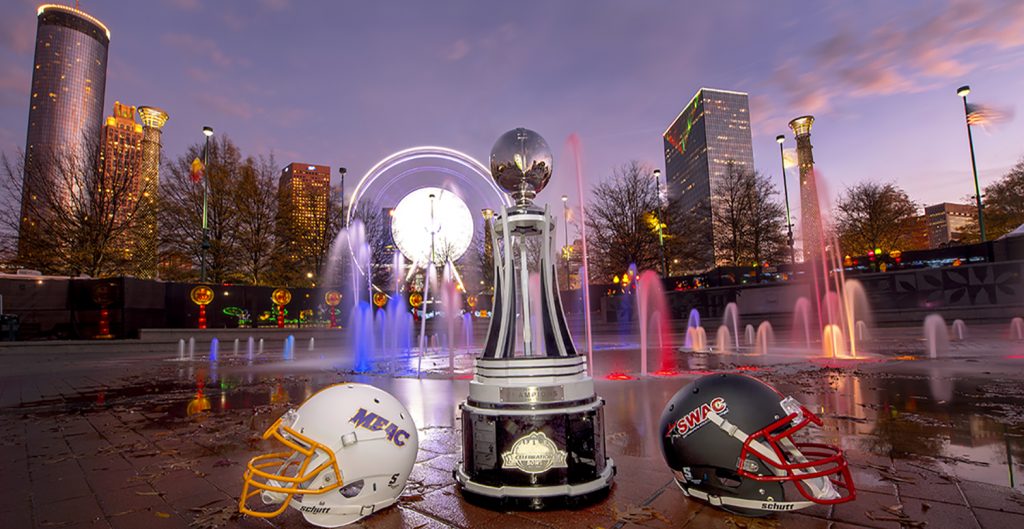 It’s becoming a habit for Aggie fans, trips to Atlanta in mid-December.

That’s because North Carolina A&T is once again competing in the Celebration Bowl. In it’s four year history, this will be the third time the Aggies are the MEAC representative. The two other times they came to Atlanta, in 2015 and 2017, they won.

“Experience is huge [in this game],” NCAT head coach Sam Washington said this week. “It’s more so for the little stuff. The guys know the things not to do. They understand what the expectations are. They know how we travel and the conduct in which we travel. Those are the things experience really helps with. They understand the situation.”

Nine players on the current NCAT roster played in the first Celebration Bowl in 2015, which came against Alcorn State. Four of those are seniors who were starters in that game – left tackle Marcus Pettiford, left guard Micah Shaw, linebacker Deion Jones and wide receiver and kick returner Malik Wilson.

How does the long break between their last game and the Celebration Bowl affect NCAT’s game preparation?

“We’re working on some of the things Alcorn is capable of doing, and some things they may do,” Washington said. “That’s the part I don’t like. There are too many ifs involved. When you have all that time to prepare, you find yourself all over the place, trying to stop everything. That’s not good, and that’s the only downside to having all the time off.”

Key Player: MEAC Defensive Player of the Year DE Darryl Johnson, Jr. has been a massively disrupting force against MEAC quarterbacks this season. He leads the MEAC in sacks (10.5) and tackles for loss (18.5) and ranks 10thin the nation in both categories. Johnson made an immediate impact to open the season. It was his strip sack of Jacksonville State quarterback Zach Cangelosi that clinched the Aggies 20-17 win over the Gamecocks who came into the game ranked sixth in the nation. The following week Johnson made seven tackles and had a sack in the Aggies upset win over FBS school East Carolina, 28-23.

“He is one of those guys who is willing to put in the extra time and give the extra effort and do the little things to be special,” Washington said. “That is what separates him from the rest. It doesn’t hurt that he is also very athletic and can run, run. He has the attributes every coach dreams of.”

Fantasy Bonus Baby: RB Marquell Cartright leads the Aggies in rushing, but he’s really saved the best for the stretch run. In his final MEAC game against North Carolina Central, he ran for 114 yards and 2 touchdowns. Look for Washington to go to this well early and often against Alcorn.

The Alcorn State University football program began the 2018 campaign at Georgia Tech with one goal in mind – make a return trip in December. The Braves did so by winning their third SWAC Championship in the last five seasons and 16th conference title in school history.

Alcorn defeated Southern 37-28 in the league’s title game. In what had been a season highlighted by one of the nation’s top defenses, it was the offense that took over in the SWAC Championship and controlled the ball in the fourth quarter to oust the Jaguars.

Head coach Fred McNair was tabbed as the SWAC’s Coach of the Year. McNair hoists a 16-7 SWAC record in his three seasons at the helm with three SWAC East Division titles and one SWAC Championship. This year, the Braves held the opposition to three points or less three times, and didn’t allow a defensive touchdown four times.

Additionally, McNair’s squad became the first-ever program to host a SWAC Championship game and he was the first Coach of the Year at Alcorn since 1992.

Key Player:Junior QB Noah Johnson was the SWAC Offensive Player of the Year and SWAC Championship Offensive MVP in addition to being an All-Conference First-Team selection. Johnson has thrown for 2,079 yard and 15 touchdowns, and has rushed for 960 yards and nine touchdowns. He ranks top-10 in the country with a .641 completion percentage. It was his emergence that allowed Alcorn to win the SWAC and put themselves here, along with the Braves’ shutdown defense.

Fantasy Bonus Baby:Junior RB De’Shawn Waller, the SWAC Newcomer of the Year, leads the ground attack with 1,048 yards and 12 touchdowns. He’s rushed for at least 100 yards in six of the last seven games including a game-high 177 yards and three touchdowns in the SWAC Championship. He broke loose for an 83-yard score which was the second-longest in SWAC Championship history. You know McNair is going to lean on Waller to win this game.

Jamie: NCAT was very inconsistent this year. They had big win against Jacksonville State, and then lost to Morgan State. Alcorn State lost two FBS games of its three losses. It should be a good close game. Alcorn 37, NCAT 31

Chuck: This feels like it’s going to be a game won by defense and experience. In both area, the Aggies have the advantage. NCAT 17, Alcorn State 9.

Kent: The Aggies have been a team that plays well against top competition but not so much when it is a lower lever. They will be up for the Braves and repeat as champions of the Celebration Bowl. NCAT 28 Alcorn State 17