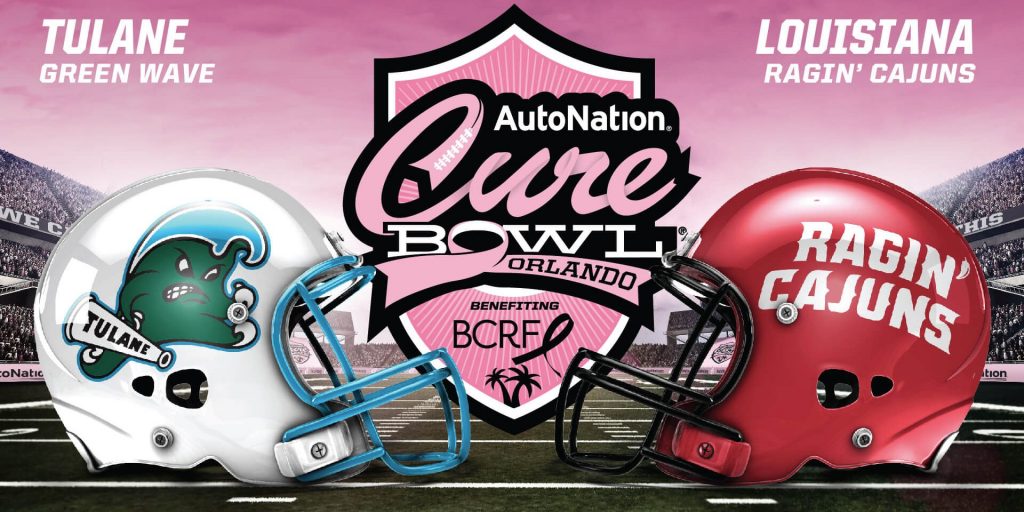 It’s off to Orlando for the Green Wave on Dec. 15 as Tulane will face Sun Belt Conference Championship runner-up UL Lafayette in the AutoNation Cure Bowl.

Tulane’s path to the Cure bowl was not easy. They had to win four of its final five games of the season to earn its bowl eligibility, and did so, defeating Tulsa, USF, East Carolina and Navy to finish the regular season 6-6.

“I was a little bit partial to try to get into that Cure Bowl,” Tulane head football coach Willie Fritz said. “Hopefully we’ll have a lot of people travel from New Orleans. We’re pumped up about it.”

The Cure Bowl will be the first bowl appearance for 19 of Tulane’s 20 seniors. OL Noah Fisher played in a bowl game while at South Alabama.

Key Player: QB Justin McMillan is arguably the biggest reason Tulane is bowl-eligible at all. A transfer from LSU, he took over as the team’s starting QB and the team went 4-1 to hit .500 and be in this position. In his last start against Navy, McMillan passed for three touchdowns and rushed for another while leading Tulane on a game-winning drive in the final five minutes. Since taking over as the starter, McMillan has 13 TDs (nine passing, four rushing) and just three interceptions.

Fantasy Bonus Baby:Junior RB Darius Bradwell is Tulane’s leading rusher this season with 984 yards on 166 carries. Bradwell has scored a team-high nine touchdowns. Bradwell ranks ninth in The American with 82.0 yards per game and is 37th nationally with 5.93 yards per carry. He is also tied for 15th nationally with 12 rushes of 20 yards or longer. Bradwell needs just 16 yards to reach 1,000 yards rushing for the season, and you’ve got to think that Fritz is going to try to feed him the ball to reach that plateau.

Louisiana-Lafayette heads to the AutoNation Cure Bowl to face the Tulane Green Wave for what will be the second bowl game matchup with the New Orleans based school and third meeting in five years.

It is only the second bowl game the Ragin’ Cajuns have ever played outside of the state of Louisiana, and the first since the 1944 Oil Bowl played in Houston, Texas, a 24-7 win over Arkansas A&M.

Like Tulane, Louisiana-Lafayette had to engage in a big winning streak just to become bowl-eligible, beating Arkanas State, Georgia State, and South Alabama at home, before traveling to Monroe and beating ULM 31-28 to win Sun Belt West.

After a 30-19 defeat to Appalachian State in the Sun Belt Championship game, the Ragin’ Cajuns are eager to put that defeat behind them and end the season on a positive note.

“Every week, we got better as a team,” said senior QB Andre Nunez. “We’re putting in the effort every week and it’s paying off. We hope to put on a show for everybody.”

Key Player: QB Andre Nunez and QB Levi Lewis alternate signalcalling duties, but both have been fairly effective at passing after the running game sets them up, combining for 26 passing touchdowns. They’ve developed a lot over the past month and they’ll need to showcase that this weekend in order to win this bowl game.

Fantasy Bonus Baby: RB Trey Ragas averaged nearly 90 yards per game on the ground and finished with 1,167 yards and eight touchdowns. He rushed for 101 yards against Appalachian State in the Sun Belt Conference Championship Game, giving Ragas his seventh 100-yard game of the season. The gutty runner will need another 100 yard game this week.

Jamie: These two in state rivals are fairly evenly matched, but the Ragin’ Cajuns have the cooler nickname and the better offense. Louisiana-Lafayette 38, Tulane 23

Kent: The Green Wave have the stronger team coming into this game and have faced a tougher schedule. I like Tulane to bring back the first bowl win since winning the Hawai’i Bowl in 2002. Tulane 34, Louisiana-Lafayette 21

Chuck: Tulane’s turnaround and the emergence of McMillan at QB should mean the Green Wave will hit Orlando this weekend. Tulane 31, Louisiana-Lafayette 21