How They Got Here: Nicholls State scored over 40 points for the fifth straight week – all wins – in a first round playoff win over Pioneer League champion San Diego. The Colonels were led by Chase Fourcade who threw for 337 yards, ran for 82 and accounted for four touchdowns on the day. THe Colonels also ran for 269 yards, keeping the Toreros off balance on defense. On the defensive side of the ball, Nicholls allowed only nine total rushing yards in the opening round win. The Southland champions have been great when they’ve been good, and when they’ve been down, they’ve been really bad. Will the hot streak continue on the Inferno in Cheney?

Playoff Floor: Nicholls is playing one of the hottest offenses in the FCS in Eastern Washington this week. This game could be a struggle for the Colonels to keep up offensively.

Playoff Ceiling: This week at Eastern Washington seems like the most likely end to the Colonels season. But the Nicholls offense is good enough to keep pace with the Eagles. If they force a couple key turnovers this is a winnable game. After that the Colonels would have to be given at least a punchers chance all the way through the semis. Is this a dark horse Frisco candidate?

Key Player This Week: QB Chase Fourcade has accounted for 32 touchdowns passing and rushing this year. The entire offense runs through Fourcade. The Colonels do have other weapons, including two solid running backs, but Fourcade is the straw that stirs the proverbial drink. Its clear that the key to containing the Nicholls offense is to keep Fourcade in check. In the three losses the Colonels suffered this year, Fourcade combined for only three touchdowns. This game figures to have a lot of offense, so Fourcade will need to be accurate and smart to pull the upset.

Fantasy Bonus Baby This Week: RB Dontrell Taylor is the lead back for the Nicholls offense. When playing against a team with the firepower that Eastern Washington has, you need to limit their opportunities on offense. The Colonels will look to run the ball more than normal with Taylor, Fourcade and Kendall Bussey. Taylor should get the bulk of the carries and his volume should allow him to be near or over 100 yards. Look for Taylor to find the end zone as well.

How They Got Here: In recent years when you think about Eastern Washington, you think about an explosive passing offense that puts up a lot of points, a team that doesn’t run the ball well and a defense that allows a lot of points. This year, the Eagles still have the explosive passing offense, but they are a very balanced offense that can run the ball as effectively as they pass it, and they play much better defense than they have the balance of this decade.

The Eagles also lost their stud quarterback, Gage Gubrud halfway through the season. When Eric Barriere took over officially, the Eagles struggled through one game and then exploded the rest of the season as they had early in the year. Last year, Eastern Washington went 7-4 but was left out of the playoffs. This year, their goal was to leave no doubt, and they have done that in a big way, outscoring their opponents on average 45-21. The Eagles have their sights set on Frisco and this week is step one for them in that journey.

Playoff Floor: A return game in the quarterfinal against UC Davis could go the other way this time should the Aggies be able to get their offense on track against the Eagles.

Playoff Ceiling: Eastern Washington has the balance and talent to not only go to Frisco, but also win the National Championship.

Key Player This Week: QB Eric Barriere took over the starting job in the win against Southern Utah. It took him two games to get adjusted to being a college starter. Since then, Barriere has run the offense as well as Gage Gubrud was running it before he went down. The one aspect Barriere brings to the Eagle offense that Gubrud is his ability to consistently contribute to the run game. In the six games as a starter, Barrierre has run for 397 yards and six touchdowns. This week against Nicholls, the Eagles offense should be able to find success passing and running the ball, and Barriere will be the biggest key to their success

Fantasy Bonus Baby This Week: The Eagles have a run game this year and they want you to know it. RB Sam McPherson eclipsed 1000 yards on the ground and added nine touchdowns this year. McPherson should get a lot of opportunities to run the ball this week against Nicholls. It would not be a surprise if he had over 150 yards and multiple touchdowns this week.

Jamie: Nicholls has been up and down this year. They have been up the last five games and could hang in on offense if they can move the ball. Eastern Washington is going to showcase its improved defense, while continuing to do what they have always done on offense. This game could be close, but it doesn’t feel like it will be Eastern Washington 52, Nicholls 17

Kent: Nicholls got its postseason run off well with its win at home over San Diego. The reward for that victory is to the red-turf Inferno in Cheney. The Eagles have won with a more balanced offensive attack and a stronger defense over what they did earlier this decade when they were a more pass happy team. Look for that new balanced attack to prove too much for the Colonels. Eastern Washington 42, Nicholls 21

Chuck: The good news for Nicholls is that they have the offense to hang with anybody and they have playoff experience. The bad news is that this is the first time in more than four years that they’ve played further north than Colorado. Eastern Washington 42, Nicholls 24 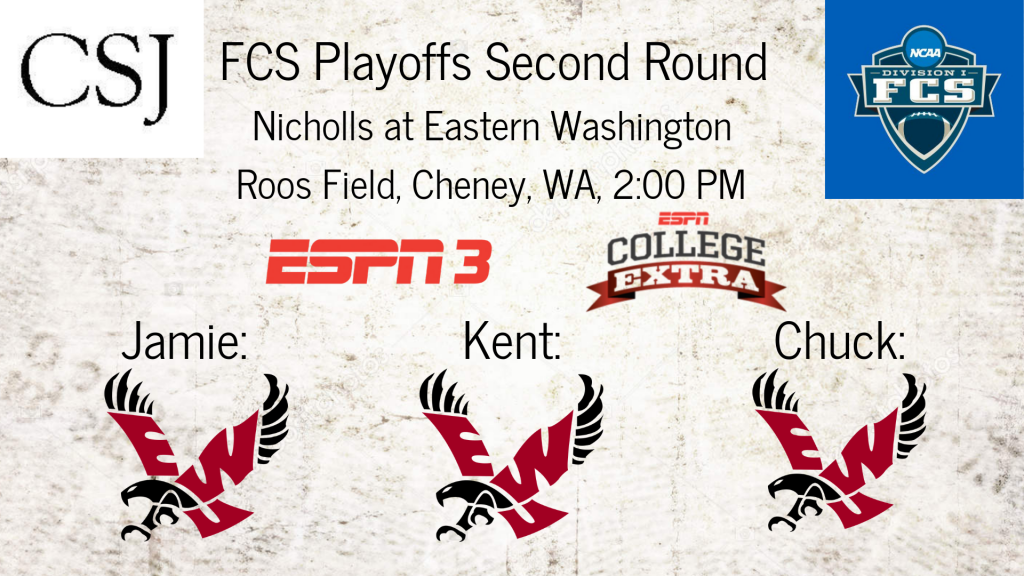