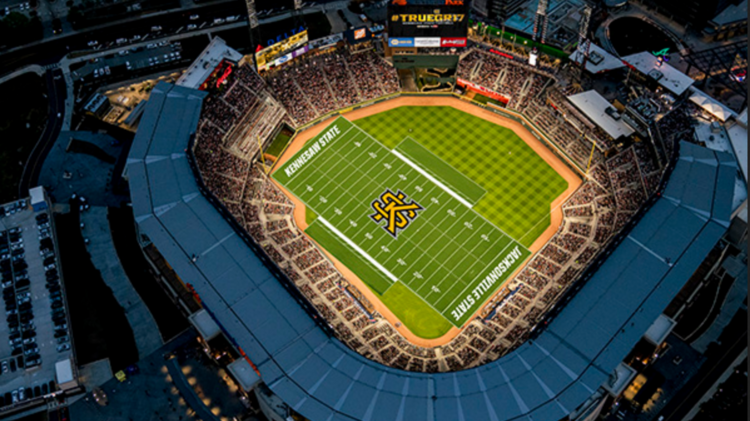 For the fifth straight year, Jacksonville State won the Ohio Valley Conference outright to secure the automatic bid to the FCS playoffs.

The difference this year versus the other four is that the Gamecocks actually lost a conference game to Southeast Missouri State.

Jacksonville State’s resume does not include any signature wins. Couple that with their losses to the two teams they were evenly matched against (SEMO and North Carolina A&T in week zero) and you have a Gamecock team that is not getting a lot of respect nationally for their 8-2 record.

Luckily, the Gamecocks have a shot this week to add a signature win against a top five Kennesaw State team getting only slightly more respect.

Key Player: QB Zerrick Cooper was a highly touted transfer that started his college career at Clemson before joining the Jacksonville State football program this season. Cooper got off to a bit of a slow start in the opening weekend loss to North Carolina A&T. It was clear that with time in the offense, Cooper would start to excel for the Gamecocks. The Gamecock offense is often overshadowed but its stout defense, but the Cooper-led attack puts up 504 yards and 40 points per game. Cooper will have to have his best game of the season to keep pace with the offense of Kennesaw State in this game. A mistake free outing will increase the chances for a win exponentially.

Fantasy Bonus Baby: WR Josh Pearson is Cooper’s favorite target in the pass game leading the Gamecocks with 53 catches and 891 yards. Pearson leads the entire FCS is touchdown catches with 16. Pearson is a big receiver at 6’4 and 205 pounds. His size provides problems for smaller defensive backs. When the Gamecocks need a big conversion on third down or get deep into the red zone, Cooper is going to have a laser lock on Pearson. Look for Pearson to find the end zone twice and have over 100 yards receiving in this game Kennesaw State had four bad minutes, 2 at the end of each half, in their opening week game at FBS Georgia State.

Had they not been sloppy in those four minutes we would be talking about an unbeaten team with a FBS win.

Instead the Owls are a one loss team without a signature win on their schedule. The Owls best win is probably over Samford who will miss the playoffs this year.

Like Jacksonville State, Kennesaw State can dim a lot of the heat their schedule has been taking by getting a big win this weekend. The Owls have clinched back to back Big South titles and will be representing the conference in the playoffs.

With a win this weekend, they will be seeded in the 2-4 range. If they lose this game, there is a solid chance they fall out of the seeds all together and have to play on the first weekend of the playoffs.

Key Player: QB Chandler Burks is the leader of the Owl offense. Burks leads the entire FCS in rushing touchdowns with 26. The closest pursuant has 17. Burks has the ball in his hand on every play and generally makes the right decision. Kennesaw has only turned the ball over 12 times the entire season, 9 fumbles and three interceptions. Burks has carried the ball 145 times for 878 times. When he carries the ball, he has found the end zone on 18% of his carries. Burks has led the Owl offense to 47 points per game. If Burks can get the ground game going and keep the chains moving on third down, it could be a productive day for the Owls in Atlanta.

Fantasy Bonus Baby: With so much control of the ball, there is no choice other than Burks here. The Owls want to control the clock and they trust their senior leader to make the right decision on every play in their unique offense. There is no doubt that Burks will score at least two touchdowns this weekend.

Fearless Prediction: This game features two teams who score over 40 points per game and allow less than 20. Kennesaw State wants to win with their ground game; Jacksonville State is more balanced. The key will be how well the Gamecock defense holds up against the triple option Kennesaw offense. Whichever team has success on first and second down wins this game. Take the Owls. Kennesaw State 34, Jacksonville State 28.