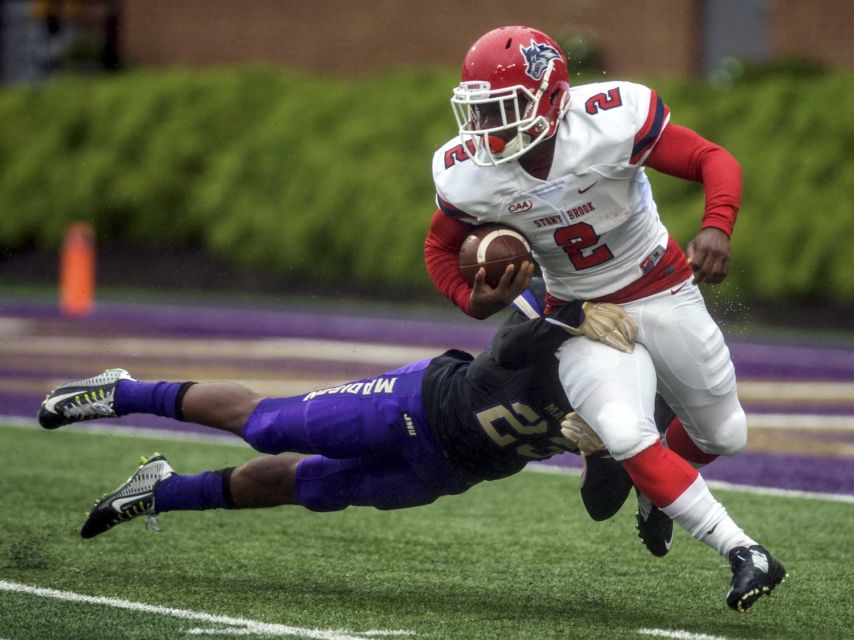 Stony Brook has been lighting up the scoreboard this season, scoring at least 28 points in ever contest except their opening weekend loss at Air Force. The Seawolves are led on offense by the Long Island Express, running backs Donald Liotine and Jordan Gowins. The pair has combined for 1534 yards and 10 touchdowns on the ground this season. As those two go, so go the Seawolves. Neither back is significantly involved in the pass game, although Liotine does have 2 receiving touchdowns on three catches this season. Quarterback Joe Carbone has accuracy issues, but he is efficient. Despite a completion percentage right around 50%, Carbone has thrown 12 touchdowns and only three interceptions. The Seawolves come into this weekend’s game looking to assert themselves as a CAA title contender. Last year, Stony Brook played James Madison in the second round of the playoffs and lost 26-7. Stony Brook is coming off of back to back blowout wins over New Hampshire and Rhode Island and carry a lot of momentum into this week’s matchup.

Key Player: QB Joe Carbone is always the key player in the Stony Brook offense. The running game has been solid all season. Carbone just has to protect the ball to give the Seawolves a chance. Stony Brook never asks Carbone to go win the game, they just expect that he will not go out and lose the game. In the loss to James Madison in last year’s playoffs, Carbone threw five interceptions to five different Dukes. If Stony Brook is going to have a chance in this game, Carbone much be more efficient than that. The Dukes feed off of turnovers, so for the Seawolves to stay in the game, Carbone has to protect the ball.

Fantasy Bonus Baby: RB Jordan Gowins seems to be the back that Stony Brook goes to in the goal to go situations. Gowins has seven touchdowns to Liotine’s three, which gives him the edge here. Stony Brook will try to establish the run behind their huge offensive line which averages about 310 pounds per man. Gowins in the bruising back that the Seawolves will try to use to wear down the JMU front seven. Look for Gowins to be near or over 100 yards and find the end zone this week.

James Madison comes off its bye week ready for the stretch run that includes three teams they are tied with or below in the CAA standings. The fourth team, New Hampshire, has had a tough injury riddled season but features a strong quarterback and wide receiver combination that can give teams fits. The Dukes will not be looking ahead any further than this week’s game against Stony Brook. THe Dukes went into their bye week having shut out Villanova on the road the week before. Coach Mike Houston was able to use the week off to allow some players to heal some bumps and bruises, while also getting the team back to some of the basics of the schemes that they may have been short on in the previous few weeks. The Dukes are kicking too many field goals when they get into the red zone. If they want to have a long playoff run, the Dukes must improve their red zone efficiency.

Key Player: DL John Daka leads the Dukes with 8.5 tackles for loss on the season. The entire defensive line is the key for this game, and Daka is going to need to be the man to lead them. James Madison will want to limit Stony Brook in the run game and try to make Joe Carbone one dimensional. If the defensive line can get pressure on the Seawolves offensive line and spend time in the backfield clogging up the running lanes, the Dukes will be successful in the game.

Fantasy Bonus Baby: WR Riley Stapleton has been the go to receiver for quarterback Ben Dinucci. Stapleton leads the team with 41 catches, 482 yards and five touchdowns. When DiNucci is extending plays, he looks for Stapleton along the sideline. In most red zone situations, Stapleton is the end zone target. This week look for Stapleton to be near ten catches and over 100 yards. He will also find the end zone at least once.

Fearless Prediction: Mike Houston had an extra week to prepare for this game. The Seawolves will try to establish the run. In the end, the Dukes’ depth will be too much for the Seawolves to handle and JMU will pull away in the end of the game. James Madison 31, Stony Brook 13