Skip to content
HomeCollege Sports JournalNCAA Division I SportsFCS FootballCSJ 2018 Week 9 Preview: Towson at Delaware, How To Watch and Prediction 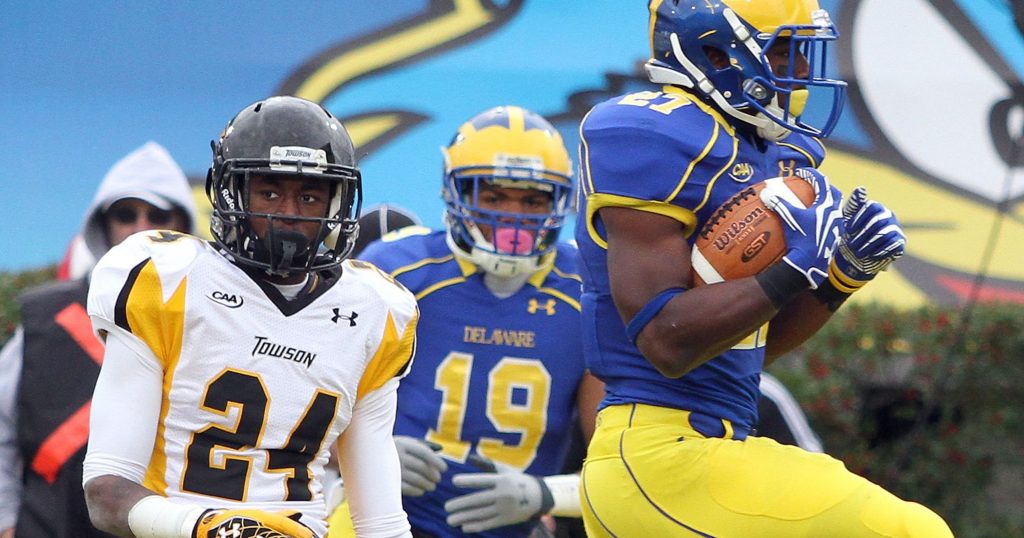 The Tigers were projected as the 10th place team in the CAA preseason polls. They have clearly exceeded expectations with the leadership of Coach Rob Ambrose and the play of quarterback Tom Flacco.

The Tigers quarterback is the younger brother of the Ravens quarterback Joe Flacco and will be looking to knock off his brother’s alma mater this weekend when the Tigers travel to Delaware.

Flacco leads the Tigers offense with his arms and his legs. He is averaging 282 yards per game through the air, and another 73 per game on the ground. Flacco has thrown for 17 touchdowns and run for four more this season. Flacco’s yards per carry of 5.4 is extremely impressive when you consider in the college game that sacks come out of a quarterback’s running total.

The Tigers are unbeaten against FCS opponents, winning each game by at least 10 points. This week’s game against Delaware will be a great test for the Towson offense. Delaware has a very stingy defense and will be the best defense the Tigers have seen all season.

Key Player: QB Tom Flacco carries this Tiger offense on his back. Flacco has completed an impressive 68% of his passes, throwing for 1976 yards and 17 touchdowns. Defenses also have to respect Flacco in the run game. Flacco has thrown seven interceptions this season, so he does take some chance in the passing game. He will need to make sure that he protects the ball against an opportunistic Delaware defense.

Fantasy Bonus Baby: When the ball is in your hand, you have the most opportunities to put up yards and points. For Towson, there is no other pick here than Flacco. All of the focus is on him and for good reason. If he has a down game, the Tigers will not win. This week look for him to throw for 250 yards, run for 50 and account for at least 3 touchdowns.

Coming into the season, everyone knew that Delaware would have a tough defense to play against, led by senior linebacker Troy Reeder. What they did not know was how the Delaware offense would perform. The Blue Hens had a huge question at quarterback with Joe Walker moving to receiver this year. Danny Rocco named Pat Kehoe the starting quarterback, to the surprise of many around the CAA. That decision has proven to be a good one as Kehoe has become more comfortable in the offense. After a poor performance in the first half against North Dakota State, Kehoe has been much better, leading the Blue Hens to three straight wins. That trend must continue this week with Towson and its high flying offense coming to town.

Key Player: QB Pat Kehoe has been a surprising bright spot in the Delaware offense. Kehoe is only tenth in the conference in completion percentage, but ranks fourth in yards per game and third in touchdown passes. Kehoe has also only thrown four interceptions, so he does what is needed and protects the ball. Kehoe will need to stay poised and move the chains to keep the Towson offense off the field as much as possible.

Fantasy Bonus Baby: RB Kane Kani is the leading rusher for the Blue Hens and the fifth leading rusher in the CAA. Kani averages 63 yards per game on the ground, but expect him to exceed that, and maybe double at this week as Delaware tries to control the clock and keep Tom Flacco on the sideline. Kani should also find the end zone at least once in this game.

Fearless Prediction: This game will come down to the Towson offense against the Delaware defense. The Blue Hen offense should have some success against an average Towson defense. At the end of the day, look for Tom Flacco to make just enough plays to keep the Tigers unbeaten in the CAA. Towson 31, Delaware 23.