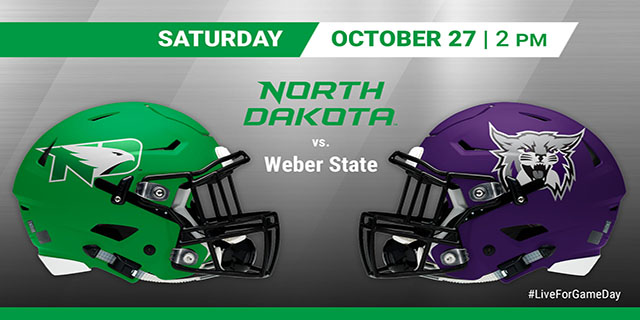 This will be just the fourth meeting all-time between the two schools, with Weber State holding a 2-1 series lead. Grand Forks was the site of Jay Hill’s first win as a head coach in 2014. The Wildcats also won in 2015 in Ogden, before falling to UND in 2016 in Grand Forks.

Weber State is coming off a win following last week’s 34-24 victory over Montana State. While UND is technically an independent, this game will count in the Big Sky standings for the Wildcats.

This game is the start of playing three of its last four contents on the road. The Wildcats have won 10 of their last 12 games on the road against Big Sky opponents, despite losing their last road game on October 6 at Northern Arizona.

A key in the game will be the Wildcat defense, which leads the Big Sky in several defensive categories and is tops in the nation in turnovers and fumbles recovered.

Fantasy Bonus Baby: Garrett is coming off a three touchdown performance in the win over Montana State. Look for him to get into the end zone again in this game and be the key to the Wildcat offense.

UND has won three straight games, including a 41-15 win at Sacramento State last Saturday. They opened the season with a home win over Mississippi Valley State before losing at Washington. They then defeated Sam Houston State 24-23 on the road.

UND is an FCS independent this season but is playing a Big Sky schedule and has won three of four Big Sky games. They lost 25-21 at home to Idaho State but have since picked up wins at Northern Colorado, a 41-14 home win over No. 22 Montana, and Saturday’s win at Sacramento State.

The Fighting Hawks are tied for second in the country in sacks with 28 on the season. They are also fifth in tackles for loss. UND is also fourth in the nation in time of possession and ranks 13th in punt return defense, 13th in third down conversions and 16th in red zone defense.

Key Player: QB Nate Ketteringham is averaging 195.1 yards of total offense per game. He has been a compliment to a strong running game for UND but with a tough defense with Weber State coming in, he will need to show the ability to throw the ball to keep the Wildcat offense off balance.

Fantasy Bonus Baby: RB junior James Johannesson, nicknamed the Fargo Freight Train as he is from Fargo, has made quite the name for himself over the past three games. He has rushed for over 100 yards in all three contests and has broken a pair of school records on the way. Last week, he needed just 11 carries to gather 213 yards rushing to set a new school mark for largest yards per carry average in a single game (min. 10 attempts).. Johannesson’s 90-yard touchdown run in the fourth quarter was the longest run by a UND player in its FCS era.

Fearless Prediction: This game rings of two dominate defenses so this should be a low scoring game. UND having lost to Idaho State earlier will need this win to secure a top notch win in the FCS for a playoff spot. Weber State needs this game to help secure a Top 4 seed in the playoffs. Something has to give in this one. With the home crowd indoors in the Alerus Center, however, I like UND to squeak out a close victory. UND 20, Weber State 17