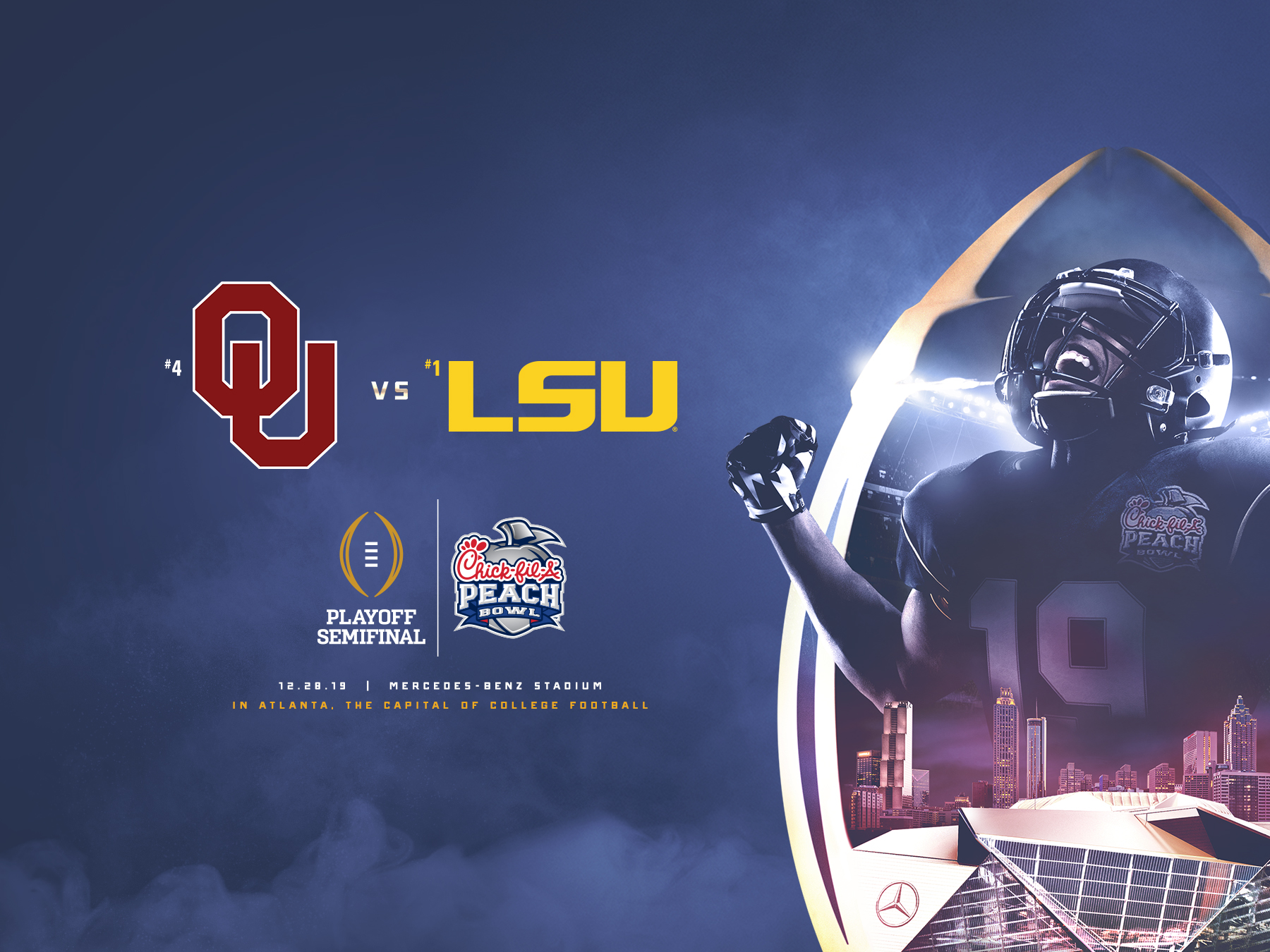 The Peach Bowl started in 1968. The bowl changed its name to the Chick-Fil-A Bowl in 1997 but changed to add back “Peach” when this bowl became part of the New Year’s Six line-up in 2014. This is the second semi-final game for the Peach Bowl with the first following the 2016 season. Below are the results of this bowl being part of the New Year’s Six line-up:

This marks the Sooners’ fourth trip in five years to the College Football Playoff and third straight appearance. Oklahoma, however, is still looking for its first win in this format. Oklahoma won the Big 12 but did lose one in-conference game at Kansas State this year and are the only team with a loss in the football final four. Oklahoma defeated Baylor in the Big 12 title game 30-23 in overtime to get the final spot in this playoff.

The Sooners have ranked inside of the top six in scoring offense every year since Coach Lincoln Riley took over the head job. Oklahoma’s offense enters the Peach Bowl averaging 43.2 points a game and first nationally in yards per play (8.2).

QB Jalen Hurts has to deliver a monster performance for Oklahoma to pull off the upset of the top ranked LSU. The senior has showcased during his career at Alabama previously. Hurts guided the Crimson Tide to two playoff appearances as the starter from 2016-17 and was the starter for most of Alabama’s run to the 2018 title game but was replaced in the national title game by Tua Tagovailoa and was his back-up last year.

WR CeeDee Lamb (58 receptions for 1,208 yards) is the top target for Hurts. The junior showed his talents against Baylor for 173 recieving yards in the Big 12 title game, which marked his sixth 100-yard game of the season.

The big reason why Oklahoma has not yet won a College Football Playoff game has been its defense. The arrival of defensive coordinator Alex Grinch has brought improvement to Oklahoma’s defense this year. After giving up 33.3 points a game and 6.1 yards per play last season, the Sooners have lowered those totals to 24.5 a contest and 5.3 a snap. Linebacker Kenneth Murray (95 tackles) leads a run defense that ranks first in the Big 12 (132.1 ypg allowed).

Key Player: QB Jalen Hurts completed 71.8 percent of his throws for 3,634 yards and 32 touchdowns to just seven picks. He also adds the running element as he had 1,255 rushing yards and 18 touchdowns this year. Hurts will need to stay turnover free and keep drives alive either passing or throwing for Oklahoma to win this game. He will also need to make the right reads against the strong LSU defense to take what they give and not force anything. He needs to use his experience against LSU. Hurts started games against LSU his freshman and sophomore seasons and led Alabama to wins in both. 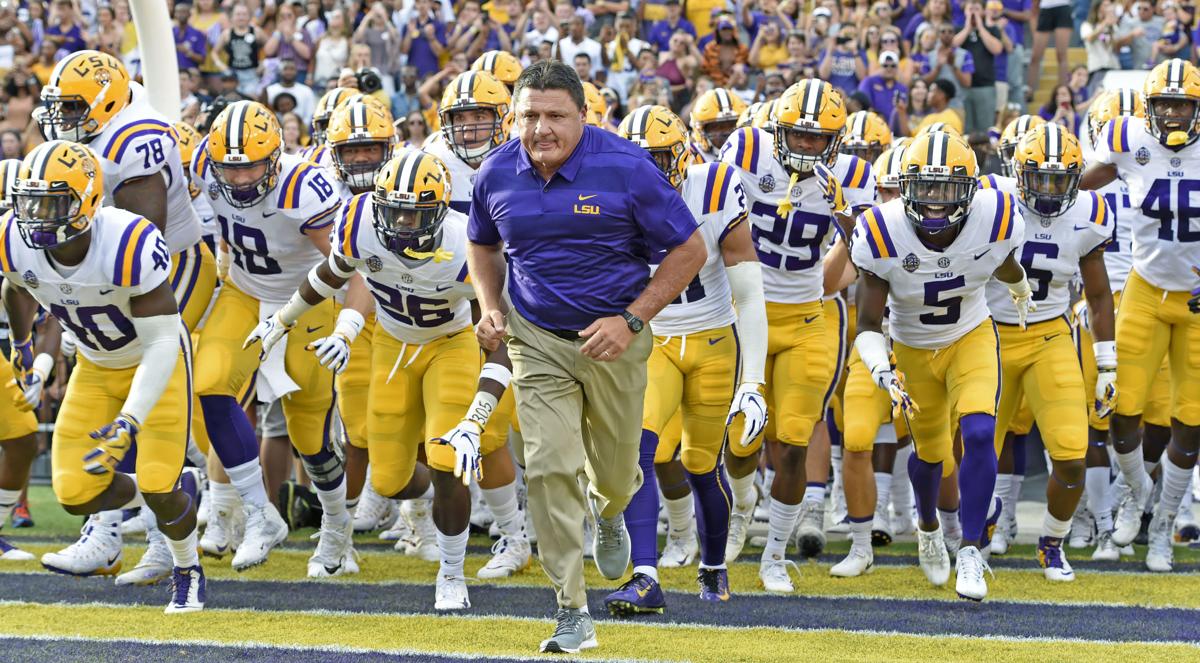 LSU will be making its first ever College Football Playoff appearence. LSU, however, was the BCS champions in 2003 against Oklahoma. The Sooners won 35-0 in the 1950 Sugar Bowl as the only other meeting between these schools.

The Tigers were dominate all season and got the SEC Crown by defeating Georgia in the same stadium as this game. Coach Ed Orgeron’s team put together a team that has been very good on both sides of the ball this season.

The Tigers were solid on defense once again as this has been the strong side of the ball in past years as well. Under the direction of coordinator Dave Aranda, LSU is holding teams to just 21.2 points a game.

LSU has competed in 51 bowl games (with 50 being sanctioned by the NCAA) in its history, going 26–23–1 in NCAA sanctioned bowl games. The Tigers have played in 19 straight bowl games since 2000, the fourth longest active streak in the NCAA and second longest in the SEC.

Key Player: QB Joe Burrow threw for 4,715 yards and 48 touchdowns to just six interceptions this season as he thrived in the more spread offensive sets. Burrow connected on 77.9 percent of his throws and torched some of college football’s best defenses (Florida, Auburn, Alabama and Georgia). The big stage is something he has seen as shown in the SEC title game but the College Football Playoff is another animal. He will need to continue his Heisman pace and also avoid turnovers, which Oklahoma has a big statistical edge.

Kent: Jalen Hurts and the Oklahoma offense will be able to move the ball at times but Joe Burrow and the LSU offense will not be stopped much. The game will be close at the half but LSU will pull away with its defense coming up with more stops than Oklahoma’s in the second half. The Tigers move on to play the winner of Ohio State and Clemson. LSU 42 OU 31

Ben: Jalen Hurts may be up for comeback player of the year in people’s hearts, but that won’t save him against Joe Burrow and the LSU defense. OU is very good at scoring points, but not so good at defending points. LSU is good at both. When two high caliber teams like this square off all sides of the ball need to be competitive. In Oklahoma’s case that isn’t so as their defense will have to be extraordinary for them to win. LSU 45, OU 35

Chuck: Oklahoma is going to play better than a lot of people think – maybe not enough to win the game, but enough to put a scare into Ed Orgeron’s team. LSU 31, Oklahoma 28