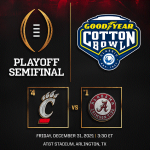 After years of public uproar (especially of those that follow the non-Power Five leagues) in the consideration of Group of Five schools, Cincinnati gets their shot to show what it can do in a college football playoff setting. In previous years, undefeated G5 schools were passed up for one-loss Power Five teams, UCF was that team in 2017 who like Cincinnati was the only undefeated team in the FBS ranks.
The Bearcats get a shot at the top seeded team, the Alabama Crimson Tide. Alabama won the SEC Championship Game in convincing fashion, with a 41-24 win over previously undefeated Georgia.

In what was to be the last regular season weekend, there was a lot on the line in all conference races to determine the participants in the five Group of Five conference title games.  It was also a week in a normal, non-COVID-19 season that would have ended with the Army-Navy game.  While that game […]

In a game that happened basically overnight, it turned out to be one that many are calling an instant classic.  The game was BYU at Coastal Carolina—a match-up of two 9-0 teams coming into the game made possible due to the Chanticleers cancelation with its game with Liberty due to COVID-19 reasons amongst the Flames […]

This was the week that the first College Football Playoff rankings came out and to say the least, I was surprised with the rankings. Below were the Committee’s rankings from this past Tuesday. I was not too surprised with the teams selected, although I thought Liberty should have been in the Top 25 given its […]

One is down but did not go down with out a fight. That one team is Liberty, who looked as if it would again pull off another ACC road win at North Carolina State.  After Liberty QB Malik Willis had an off game in throwing three interceptions, including what lead to the game winning touchdown […]

The Group of Five undefeated teams just stay undefeated. The five schools (that have played four games or more) coming into this week stayed that way with all picking up rather easy wins this week. The group includes BYU, Cincinnati, Liberty, Coastal Carolina, and Marshall. BYU played in arguably the top match-up of the weekend […] 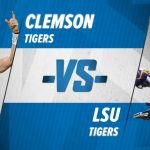 The Tigers were dominant all season and got here by winning the SEC Crown by defeating Georgia and by boat racing Oklahoma in the CFP Semifinal. Coach Ed Orgeron has put together a team that has been very good on both sides of the ball. 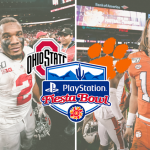 A berth in the College Football Playoff National Championship Game is on the line as Ohio State and Clemson do battle in this year’s PlayStation Fiesta Bowl. 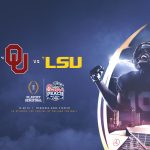 Oklahoma vs. LSU (College Football Playoff Peach Bowl) When: Saturday, December 28th, 4:00 PM EST Where: Mercedes-Benz Stadium, Atlanta, Ga. TV/Streaming: ESPN/WatchESPN Peach Bowl History The Peach Bowl started in 1968. The bowl changed its name to the Chick-Fil-A Bowl in 1997 but changed to add back “Peach” when this bowl became part of the […]