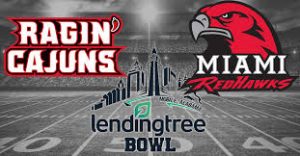 The bowl has been titled several different things since it began following the 1999 season. The game was known as the Mobile Alabama Bowl for its first two playings, in 1999 and 2000. GMAC had become the title sponsor for the 2000 playing, and the game was renamed as the GMAC Bowl for the 2001 though January 2010 playings. It was then the GoDaddy.com Bowl for the January 2011 to January 2013 playings when GoDaddy took over sponsorship. In May 2013, it was announced that the “.com” would be dropped from the bowl’s name, rebranding it as the GoDaddy Bowl for the January 2014 through December 2015 editions. Dollar General took over sponsorship on August 17, 2016, with the 2016 through 2018 playings branded as the Dollar General Bowl. This year, it was changed to have Lending Tree as its title sponsor.

The Ragin’ Cajuns come into this next to last bowl game winning six of their last seven games. Louisiana won the Sun Belt West Division and the ten wins is a school record. Louisiana’s only losses came to begin the season in New Orleans against the SEC’s Mississippi State and twice to App State including the Sun Belt Championship game 45-38.

This postseason bowl appearance will be the ninth in program history and the second under Sun Belt Conference Coach of the Year Billy Napier. Louisiana holds an official record of 4-2 in bowl games. But the Ragin’ Cajuns have not won a bowl game since it defeated Nevada, 16-3, in the 2014 New Orleans Bowl on Dec. 20, 2014.

The Ragin’ Cajuns will look to continue its domination on the offensive side of the ball, especially on the ground. Louisiana ranks eighth nationally in total offense (501.3) and 10th in scoring offense (38.8). Louisiana has produced 3,449 yards on the ground this season and has scored 41 total touchdowns on the ground through 13 games. The total yardage is fifth in the nation, while the 41 touchdowns is tied for fourth behind Navy (51), Army (48) and Clemson (42).

The Louisiana defense has been stellar this year, holding ten of its 13 opponents to less than 30 points per contest, four of which scored less than 10 points. The Ragin’ Cajuns currently ranks 20th nationally and leads the Sun Belt in scoring defense, holding opponents to just 19.9 points per game. Louisiana also has the Sun Belt’s stingiest pass defense, which has collected nearly as many interceptions (10) as touchdown passes allowed (11).

The Ragin’ Cajuns are led by junior QB Levi Lewis, who has completed nearly 64 percent of his passes with 24 touchdowns to four interceptions this year. Lewis is complemented by junior RB Elijah Mitchell, who has rushed for 1,092 yards and 15 touchdowns on the ground this season, which is 12th in the country for rushing scores.

Louisiana and Miami have played twice before with the Redhawks winning both contests but the last game between the two schools took place in 1993.

Key Player: QB Levi Lewis completed 224 of his 352 attempts for 2,804 yards and 24 touchdowns to just four picks. With his four touchdowns in the Sun Belt Championship game, he is now the schoool record holder for the most touchdowns in a single season. He will need to continue this trend in this game against the MAC champion Redhawks. 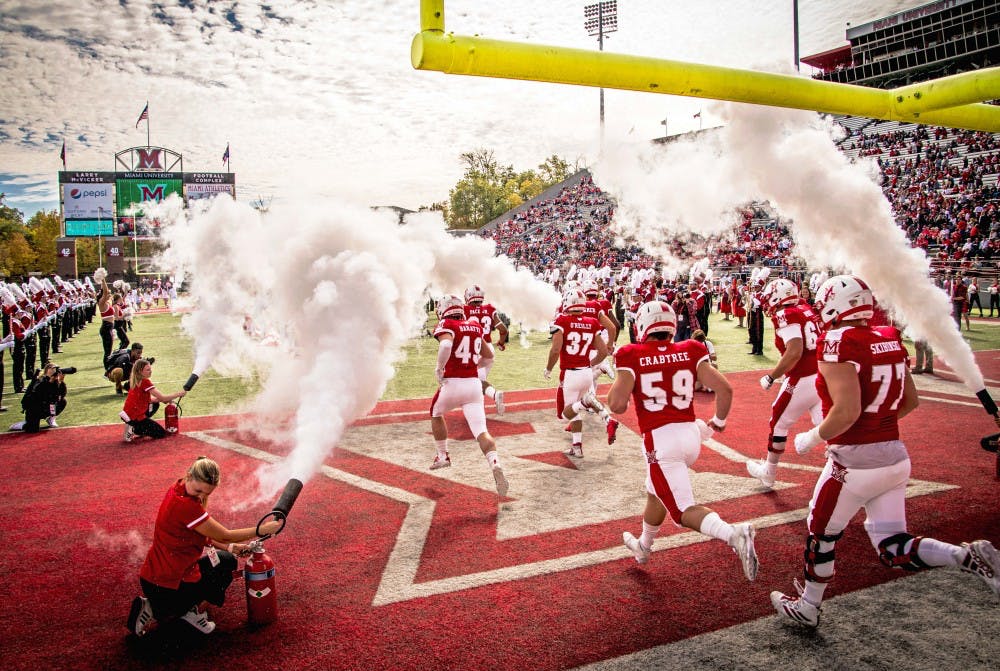 The RedHawks withstood a difficult non-conference schedule that featured two Big 10 road games against Iowa and Ohio State, as well as another road contest at eventual American West Division champion Cincinnati. Even with those three losses, Miami was able to put together a strong season within the MAC to win the conference’s East Division. The RedHawks won seven of its last nine games and defeated Central Michigan 26-21 to claim their first MAC championship since 2010.

Miami was 4-26 in Coach Chuck Martin’s first 30 MAC games. Miami is 23-8 in the last 31 games versus schools from the MAC, the best record in the conference in that span. Miami is bowl eligible for the third time in four years. From 2006-15, Miami was bowl eligible just twice.

The Redhawks are a young team with s 17 players classifiedas sophomores or younger in their two-deep depth chart.

The Redhawk offense is headed by true freshman QB Brett Gabbert, who passed for 2,163 yards and 11 touchdowns. RB Jaylon Bester and WR Jack Sorenson are the two offensive performers around Gabbert. Bester enters this game with 689 rushing yards and 12 touchdowns this season, while Sorenson leads the RedHawks in receiving with 34 catches and four scores.

The RedHawks are competing in their 12th bowl game in school history and are 7-4 alltime in bowl games. This is Miami’s third trip to Mobile, Ala., for a bowl contest and are 2-0 in Ladd-Peebles Stadium with wins in 2003 and 2010.

The RedHawks are competing in their 12th bowl game in school history and are 7-4 alltime in bowl games. This is Miami’s third trip to Mobile, Ala., for a bowl contest and are 2-0 in Ladd-Peebles Stadium with wins in 2003 and 2010.

Key Player: Brett Gabbert won the starting job in fall camp and has started all 13 games for the Redhawks this year. While his statistics are not great, he has proven to be a great game manager. He is the younger brother of NFL signal caller Blaine Gabbert. He had a stretch of 75 pass attempts with no interceptions and had just thrown just eight picks this year. He will need to be turnover free in this game for the Redhawks to stay with the high scoring Ragin’ Cajuns offense.

Fearless Prediction: These two teams, both had a common opponent in Ohio. Louisiana was able to easily defeat the Bobcats 45-25 on Sept. 21, while Miami was narrowly defeated its MAC East rivals 24-21 on Nov. 6. This is a good telling of how this game will go, I believe. The Ragin’ Cajuns seem to have too much fire power for a good Redhawks defense and Miami’s offense does not have the experience or performance that will lead to a fairly easy win for Louisiana. Miami will be able to keep it close for the first half but the Ragin’ Cajuns will pour it on late. Louisiana 41 Miami (OH) 24