We are just over a week out from the FCS National Championship game in Frisco, TX. By all accounts, this should be a tightly contested, close matchup featuring the two best teams in the country. Let’s take a position by position look at the number two team in the country, the James Madison Dukes. 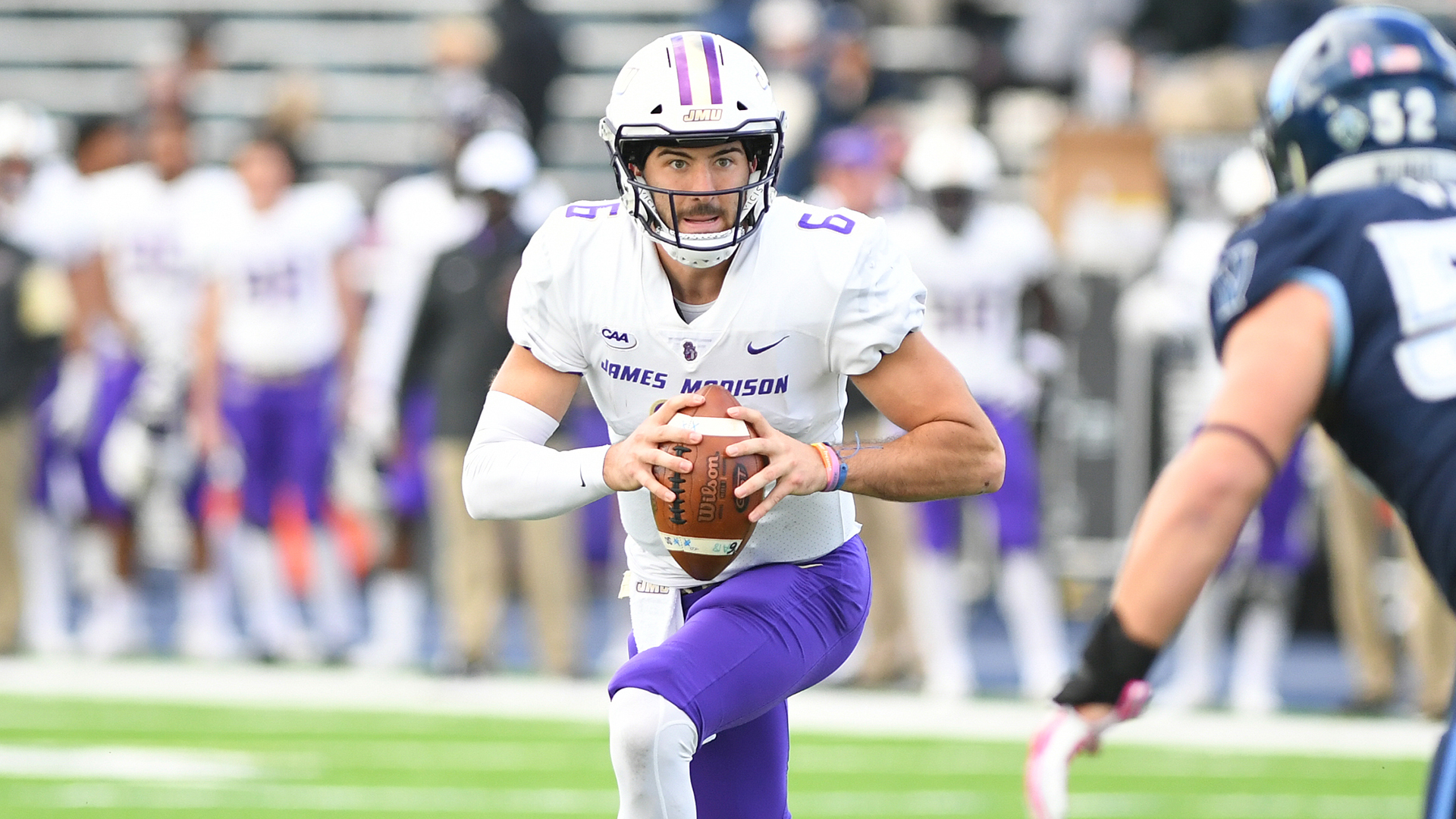 Through the spring and summer, many James Madison fans were not sure who would be under center for the upcoming season. The Dukes had a new coach, Curt Cignetti, and their last look at the incumbent, Ben DiNucci left a sour taste after a five interception game in a second round loss to Colgate. Late in the summer, Cignetti announced that DiNucci would be the guy. For many fans, it was prove it time. Ben did just that. DiNucci has thrown just seven interceptions the entire year to go with 27 touchdowns and 3237 yards. DiNucci is second in the nation in passer efficiency (behind only NDSU’s Trey Lance) and leads the nation in completion percentage. DiNucci has also gotten it done with his legs running for 560 yards and seven touchdowns. DiNucci was named the CAA Offensive Player of the Year.

To go along with DiNucci’s seven rushing touchdowns, JMU backs added another 36 on the ground. This is a deep position group for the Dukes. The lead back has been Percy Agyei-Obese who leads the team with 1143 yards and 19 touchdowns. Usually, the second man up is Juwon Hamilton who has run for 896 yards and five touchdowns. When the Dukes have needed a change of pace in the second half, true Freshman Latrele Palmer has entered the game and run effectively, picking up 356 yards on just 52 carries with four touchdowns. The Dukes rank 10th in the nation with 248 rushing yards per game.

The Dukes usually have one of two tight ends on the field: Dylan Stapleton or Drew Painter. Of the two, Painter is more of the blocking tight end, having caught only four passes all year. Stapleton has been used strategically in the pass game and has done a good job to move the chains when needed. He has 29 catches for 360 yards, but only one touchdown. The tight end is not much of a focal point for the Dukes’ offense, but when needed, Stapleton has usually stepped up.

At receiver, the Dukes are led by the speedy senior Brandon Polk, a Penn State transfer. Polk set single season JMU records in receptions (73), yards (1173) and touchdowns (11). He has shown the ability on multiple occasions to turn a short five yard route into a touchdown. Polk’s speed has been a game breaker for the Dukes. On the other side, Riley Stapleton has had a bounce back senior year after a tougher junior campaign. Stapleton has 55 catches for 688 yards and eight touchdowns. Stapleton had a huge game in the semifinal against Weber State with 9 catches for 162 yards and two touchdowns. Jake Brown and Kyndel Dean also have over 20 catches on the year to round out the Dukes’ receiving corps.

In 2018, the offensive line lacked consistent play. In 2019, under the direction of Damian Wroblewski, affectionately known as Wrobo, the JMU offensive line has returned to being a strong bunch. The Dukes alternate Zaire Bethea and Raymond Gillespie at the left tackle, but the rest of the line has been fairly set the entire season with Truvell Wilson at left guard, team captain Mac Patrick at center, Jahee Jackson at right guard and All American Liam Fornadel at right tackle. Along with the 10th rated run game, the Dukes have only allowed 25 sacks on the season. JMU is where they are in part due to the strong play of this line. If there is a breakdown, its usually in a blitz situation where an assignment gets missed, but overall, this group has dominated the competition.

Speaking of groups that dominate the competition, the JMU defensive line may be the most talented single position unit in the entire FCS. The Dukes primarily use four guys on the line the entire game: John Daka, Mike Green, Adeeb Atariwa and Ron’Dell Carter. These four players have accounted for 75 tackles for loss and 37 sacks. Both Daka and Carter were nominated for the Buck Buchanan Award; and Carter is one of three finalist for the award that will be announced the night before the national championship game. Daka has 26.5 TFL and 16.5 sacks while Carter has 25.5 TFL and 11.5 sacks. In the half against Monmouth when Atariwa was suspended for targeting, Garrett Groulx filled in admirably. Freshman Jalen Green has contributed as well.

Dimitri Holloway is the Dukes’ leading tackler with 115. Holloway plays in all situations and can stop the run or cover a tight end or running back in passing situations. Holloway never comes off the field. He made his arrival known in the 2016 semifinal matchup at the Fargodome with 16 tackles. Landan Word is usually the other linebacker on the field with Holloway. After slowly last year due to injury, Word has become a very reliable player. Other linebacker contributors are Diamonte Tucker-Dorsey and Kelvin Azanama have also frequently contributed at the linebacker position.

Wayne Davis gets his own section. He plays all over the field for the Dukes who have labeled his position as a spur. Davis, and Ohio State transfer, lines up at safety, corner and linebacker for the Dukes. Davis is excellent at reading plays and being in the right spot whether it’s a run or a pass. With North Dakota State heavily involving their tight ends in the pass game and their strong run game, we should hear Davis’ name quite a bit.

The JMU secondary may not be as star studded as it was in the 2017 season, but it’s still quite good. With Rashad Robinson returning from injury to start the year and then dealing with injuries in the middle, it took a while for the unit to gel. But since the 4th quarter of the Villanova game, the Dukes pass defense has been a top 15 unit. The four starters are Rashad Robinson and Wesley McCormick at the corners, with Adam Smith and D’Angelo Amos at safety. Those four players have 11 interceptions and 27 pass break ups. In rotation (or suspension coverage), JMU has also seen strong play from Que Reid, MJ Hampton and Charles Tutt among others.

JMU features solid special teams, although they are a step behind the quality of play the units showed over the last few years. The Dukes have been susceptible to long kickoff returns from time to time this year and have allowed a few return touchdowns.

Camden Wise is the kickoff specialist. He has kicked a couple out of bounds but otherwise has done a good job of placing his kicks.

Ethan Ratke is only a junior and is already the school’s leading scorer. On the season, Ratke is 25/31 with a long of 44 yards. THe 25 field goals are the most in the FCS this year. Ratke made 77 of 78 extra points. He is a kicker that the Dukes trust in the clutch as evidenced by his 46 yard kick to beat Weber State in the 2017 quarterfinals. The Dukes have blocked four field goals while allowing opponents to convert just 12 of 20 kicks.

Of his 46 punts this year, JMU fan favorite Harry O’Kelly has only 2 touchbacks and has dropped the kick inside the 20 yard line 21 times. If a team doesn’t pay attention, O’Kelly has the ability to take off and run for a first down, a skill that North Dakota State fans should remember well from 2017.

D’Angelo Amos is a dangerous punt returner who has the ability to flip field position on his own. Amos only has one punt return for a touchdown this year but averages just under 13 yards per return.

The Dukes’ kickoff return tandem of Brandon Polk and Juwon Hamilton lead a Dukes kickoff return group that averages 25 yards per return and has one return touchdown from Devin Ravanel.

Look for all of these units in action in the FCS Championship game on January 11 at noon eastern on ABC.