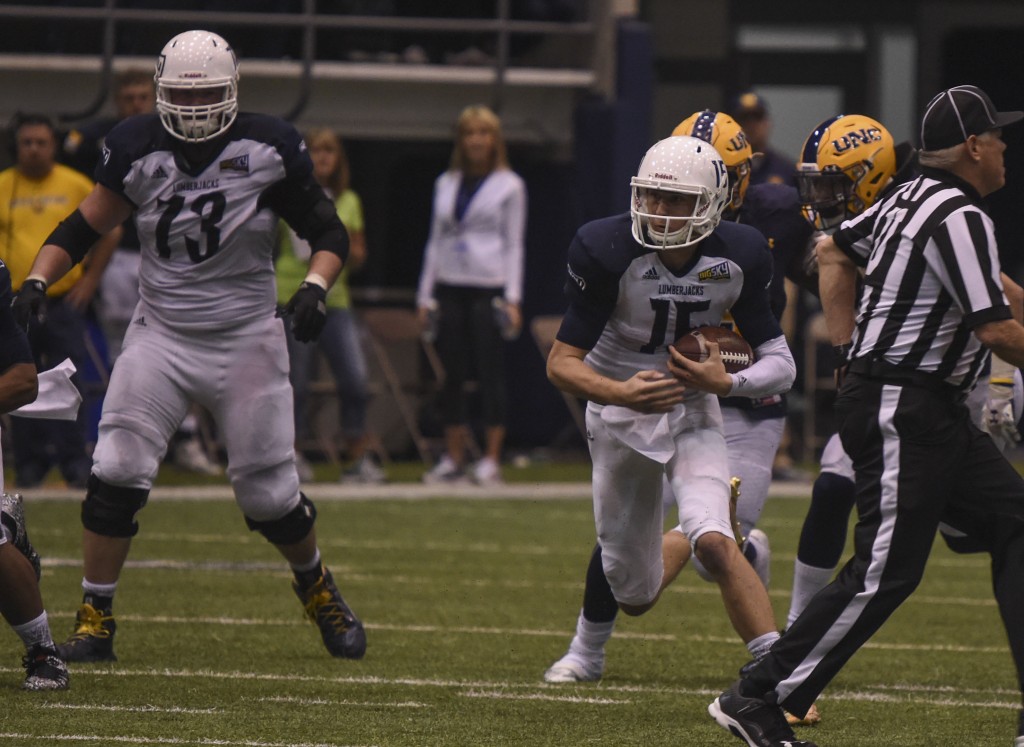 Just when we thought the Big Sky was starting to sort itself out, something like last week happens. Weber State, emerging as the strong lead dog, then fell to in-state rival Southern Utah and at the same time Northern Arizona and Eastern Washington have won four straight games to look now like the cream of the crop in the BSC.

Here are this week’s power rankings with last week’s rankings in parenthesis.

This week: vs. UC Davis

The Lumberjacks started the season with two straight losses but have been very impressive in their last four games–all wins. NAU gets UC Davis at home this week and will go as far as the right arm of Case Cookus takes them.

This week at Southern Utah

Similar to NAU, the Eagles have now also won four straight after starting out with two losses. EWU has a tough test this week though with a trip to Cedar City.

The Grizzlies were impressive in its win despite playing a injury plagued UND team. A bye pretty much at the mid-point will only help get Montana get ready for the stretch-run.

This week at Cal Poly

The Wildcats were looking good but lost quarterback Stefan Cantwell’s to a concussion. With Justin Shaw and/or Braden Miles taking turns, Weber couldn’t do anything offensively last week. Luckily, a trip to winless Cal Poly might be able to right the ship this week.

This week: vs. Eastern Washington

The Thunderbirds have been up and they have been down so far this season. A big win over WSU was a big up but will need to be up again for this week’s tilt against EWU.

The Hornets have been one of the pleasant surprises so far in the Big Sky. Sac State gets a trip to UND this week and very well could still be in the thick of things in the league and playoffs with a win this week.

Last week: Lost to Eastern Washington 31-19 on the road

This week: at Northern Colorado

The Bobcats couldn’t overcome a large deficit to start the game with EWU. A road test in Greeley awaits MSU this week in what should be road win (at least on paper).

This week: at Northern Arizona

The Aggies took a bye last week and hope to be ready for road test against what now looks like the best team in the league in the Lumberjacks.

Last week: Lost to Sacramento State 41-21 on the road

This week: vs. Portland State

The Bengals looked like another surprising team especially after defeating FBS Nevada but the conference slate so far has not been real pretty. A home game against the winless Vikings might help get ISU to .500.

This week: vs. Sacramento State

The defending co-champions are pretty much playing for pride at this point. A home contest win against Sac State might help mend some of this season’s wounds.

This week: vs. Montana State

The Bears got a bye to prepare for MSU this week. UNC still could right the ship and go on a run and it starts with a home contest with MSU.

This week: at Idaho State

The Vikings have looked impressive this season at time but the win column has eluded this team. A road trip against ISU could be win number one if PSU can put it all together in a full game.

This week: vs. Weber State

The Mustangs were a playoff team last year and looked in the preseason to challenge for a spot. That goal will not be met but can win number one come against the Wildcats this week?