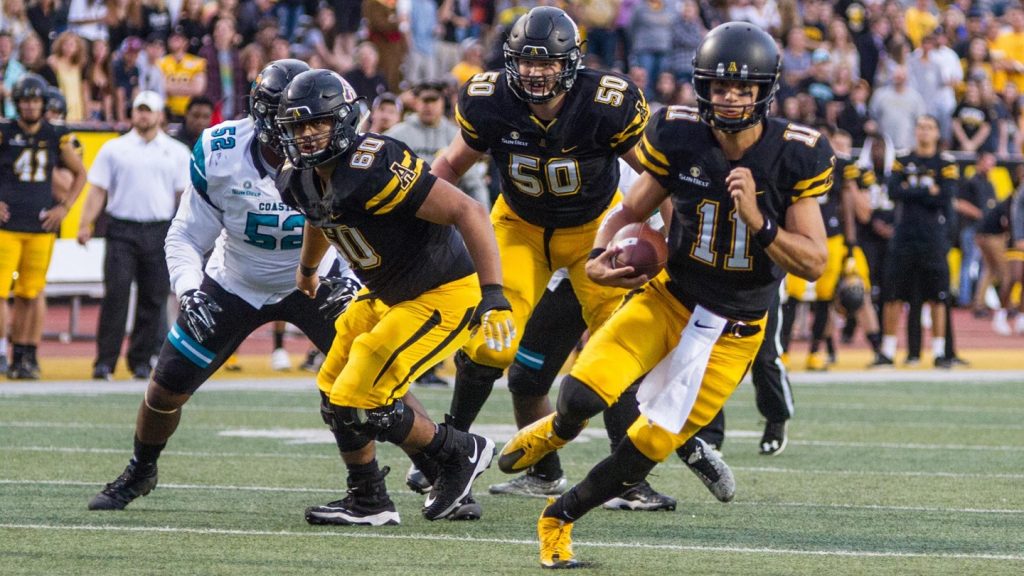 As Ian Anderson sang in Jethro Tull’s first hit single, “Nothing is Easy,” and Appalachian State proved that again Saturday by scratching and clawing its way to a 37-29 Sun Belt Conference victory over scrappy Coastal Carolina before 30,179 fans at Kidd Brewer Stadium.

After sprinting to its 17-3 second-quarter lead, the Mountaineers turned the potential blowout into a nail-biting struggle with sloppy play in all three aspects of the game. But another strong finish enabled ASU (5-2 overall, 4-0 in conference) to close things out once again.

With star running back Jalen Moore suffering another injury — this time to his foot — and senior Terrence Upshaw sidelined for the season with a torn triceps, the Mountaineers turned to the passing game with sometimes spectacular results.

Senior quarterback Taylor Lamb completed 23-of-39 passes for 427 yards and two touchdowns — both to dynamic redshirt freshman Jalin Virgil — and hit nine different receivers to jump start an offense that had struggled in recent weeks.

“We knew we were going to come in and sling it around,” said Lamb, who broke Armanti Edwards’ school record with his 75th career TD pass on an 83-yard scoring strike to Virgil, five minutes into the game to make it 14-0. “We had our shots down the field today.”

Virgil also contributed another touchdown reception when he turned a short pass into a 53-yard, highlight-reel scoring play in the third period as ASU took the lead for good at 23-22. He finished with five receptions for 186 yards.

Those efforts offset the performances of CCU quarterback Tyler Keane, who 17-of-29 for 332 yards and two TDs and receiver Ky’Jon Tyler, who grabbed five passes for 141 yards and a 73-yard score.

In the fourth period, App State closed out the contest with heavy contributions from redshirt freshman tailback Marcus Williams, who carried the ball 15 times for 72 yards and two touchdowns.

“It was a hard football game,” ASU coach Scott Satterfield said. “But once again, they found a way to win. A lot of young guys stepped up and made plays for us.”

Coastal Carolina (1-6 and 0-4 in its first season at the Football Bowl Subdivision level) could have folded its tents early in this one, but the Chanticleers gritted things out to build a 19-17 halftime advantage and expanded it to 22-17 on their initial drive of the third stanza.

Evan Rabon gave CCU its first lead with 29 seconds left in the second quarter when he drilled a clutch 49-yard field goal, his second of the game. Rabon nailed another kick from 24 yards out after Appalachian’s defense knocked away a pair of potential scoring passes on the opening possession of the second half.

While Rabon was converting three field goals, though one extra point clanked off the right upright in the second quarter, App State was struggling yet again with its kicking component.

Beleaguered sophomore place kicker Michael Rubino hit his first field goal from 38 yards in the second period, but failed on attempts of 30, 38 and 41 yards later in the contest. ASU also failed on a two-point conversion run by holder Rylee Critcher.

Eventually, Chandler Staton replaced Rubino — who had cost App State dearly in narrow losses to Power-5 teams Tennessee and Wake Forest in the past to years — for the Mountaineers’ final extra point attempt.

“That’s nine points there,” Satterfield said of the kicking woes. “It wouldn’t have been close if we (had) made our field goals.”

Satterfield added that Rubino and Staton would be competing for the place-kicking assignment in practice this week when Appalachian prepares for next Saturday’s 3:30 p.m. game at Massachusetts. UMass, which lost to ASU 28-17 in the 2006 NCAA Division I championship contest, got its first victory of the season on Saturday with its 55-20 triumph over winless Georgia Southern.

As the Mountaineers head into their final non-conference game, they will still be in search of their first, complete 60-minute effort of the season.

“We had a fast start and a fast finish,” said Satterfield. “In the middle, not so good.”

But Appalachian is still relieved to be undefeated and on top of the Sun Belt standings.

“The great thing is we really haven’t played a complete game and we’re 4-0,” Satterfield said.