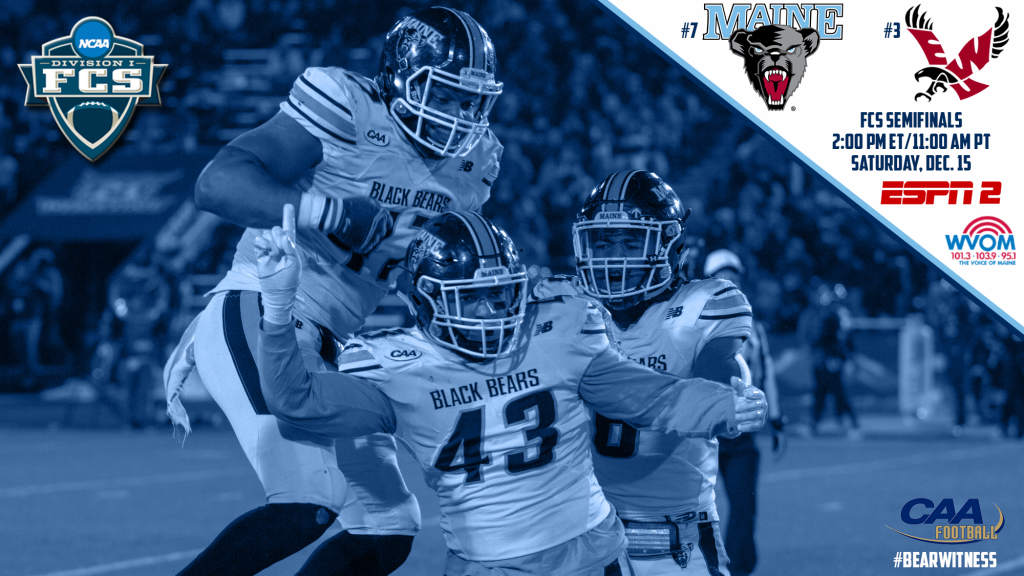 Last week, Maine traveled across the country for a Friday night game against Weber State.

Many though the short week and elevation would negatively impact the Black Bears.

All the Black Bears did was play a dominating brand of defense and an efficient enough offense in a 23-18 win over Weber State.

The final score was closer than the game actually was, with the Wildcats scoring a meaningless touchdown at the final gun.

Maine allowed a total of -1 yards rushing for the game, sacked Jake Constantine 3 times, and picked him off four times.

On offense, Maine was efficient enough with Chris Ferguson throwing for 170 yards and two touchdowns and one interception. Ramon Jefferson ran for 88 yards and a touchdown.

The Black Bears will need a much better offensive game against a tougher Eastern Washington team and they are going to have to match their defensive pressure to keep Eric Barriere uncomfortable and in the pocket.

Key Player This Week: LB Sterling Sheffield is one of the better linebackers in the CAA and FCS. He plays in all situation and disrupts what opposing offenses are trying to do. Sheffield could be used as a spy in the middle of the field to ensure that Eastern Washington quarterback Eric Barriere does not take off and run as much as he is accustomed to doing. Sheffield has 17.5 tackles for loss and 9.5 sacks on the year. He is the classic disrupted in the Black Bears defensive scheme.

Fantasy Bonus Baby This Week: RB Ramon Jefferson had an effective game against a tough defense last week, racking up 88 yards and a touchdown against a tough Weber State run defense. Eastern Washington is no slouch on defense, but they aren’t quite as good as Weber. Jefferson should get enough carries to get over 100 yards and score a touchdown.

Eric Barriere showed years of growth in one quarter of play in Eastern Washington’s 34-29 quarterfinal win over UC Davis.

The Eagles entered the fourth quarter down by a touchdown but Barriere was unfased, leading the Eagles to 20 points and Sam McPherson scored the winning points with a 35 yard run with less than 30 seconds on the clock.

The winning score was set up by a 29 yard run by Barriere to start the drive to get the Eagles into UC Davis territory.

The win put the Eagles into the semifinals, a game they get on their home turf. Eastern Washington was in this exact position in 2016 and was shocked on an unbelievable catch by Youngstown State on the last play of the game.

The Eagles’ motto all year has been “Leave No Doubt.” That is what they are going to look to do this week, and not leave it to chance at the end of the game.

Key Player This Week: QB Eric Barriere has been exceptional since taking over for Gage Gubrud. Barriere does not play like a freshman and has shown that the moment is not too big for him. Last week, he could have wilted under the pressure and lost the game to UC Davis. But Barriere stepped up and made all the right plays in the fourth quarter. You could see his confidence grow with each play. This week he will need to use his legs at the right times to mix in the run to keep the stout Maine defense guessing. Even if the rush yards are tough to come by, they have to keep the Black Bears honest. Eventually, Barriere will be able to find his exception receivers down the field.

Fantasy Bonus Baby This Week: The Eagles may have a tough time running the ball. But WR Nsimba Webster should have opportunities in the pass game. Webster has been a reliable receiver all year and will have an opportunity to come up big in the game this week to try to lead his team to Frisco. Webster may not have huge numbers at the half, but in the fourth quarter, he should be a key, pushing his total over 120 yards receiving and at least one touchdown.

Kent: Eastern Washington has had a history of losing at home in the semi-final round before–most recently two years ago to Youngstown State. I think this is the year the Eagles get over the hump and finally get back to Frisco after winning the national title in 2010. Eastern Washington 34, Maine 24

Chuck: I admittedly do wonder if this is the week where travel catches up to Maine – Orono to Ogden to Orono to Cheney is an awful lot of frequent-flier miles. On a neutral field in, say, Iowa, I might be tempted to take the Black Bears, but in the fourth quarter on the red turf, give me the Eagles. Eastern Washington 27, Maine 24 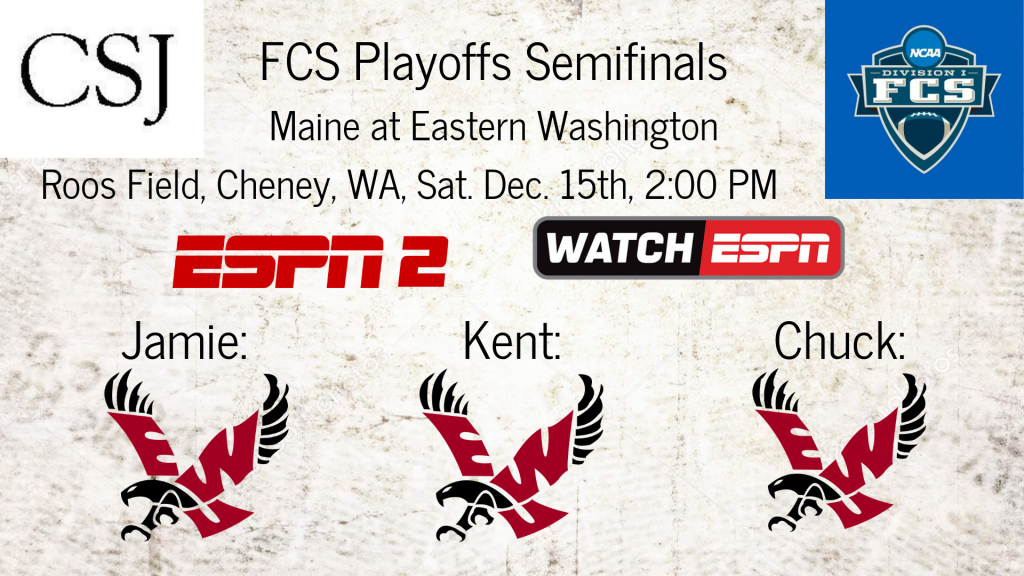