Season Recap: Riding the back of one of the nation’s longest win streaks, Lamar has advanced to the NCAA FCS Championships for the first time in program history. Less than 24 hours, after knocking off rival McNeese in Lake Charles the Cardinals were selected. Lamar started the season just 1-4 including 0-3 within the Southland Conference before reeling off the six-game win streak.

Playoff Ceiling: The Cardinals keep it close with UNI.

Key Player This week: OL Garrett Bowery was a first-team All-Southland pick in his final season. He was also named the SLC Lineman of the Year. He helped paved the way for a Lamar rushing attack that led the conference and ranked 12th nationally in yards per game (250.3). He and his offensive line mates will need to control the line if Lamar is t pull off an upset in Cedar Falls.

Fantasy Bonus Baby This Week: QB Darrel Colbert, Jr. has been named Southland Conference Offensive Player of the Week this past week. He was injured earlier in the season but has come back and been a force during the Cardinals win streak. Look for Colbert to be a key in the running game and some

Season Recap: UNI had an up and down season but did play the top ranked schedule amongst all FCS teams and got some help around the country to get into the tournament with just six wins.

Playoff Floor: The Panthers have had a history of both performing well after an opening round game and also going out in the opening round. UNI has the talent to win this game easily but will it have the drive?

Key Player This Week: QB Eli Dunn has thrown for 2,204 yards this year with 17 touchdowns and just 5 interceptions. He will need to keep that kind of ratio in this game.

Fantasy Bonus Baby This Week: RB Marcus Weymiller has rushed for 809 yards and eight scores this year. This game likely will be one that UNI gets up earlier so Weymiller should get a number of carries and look for him to get some yardage and will also get some of the goal line action with a score.

Jamie: Lamar is on a six game win streak. Northern Iowa has good wins and bad losses. But they also have playoff experience and home field advantage. Northern Iowa 38, Lamar 13

Kent: UNI with Coach Mark Farley will have his team ready in what will actually be the last home game most likely for the Panthers this year. Lamar in its first ever FCS playoff and likely will play hard as it is not expected to get past this the opening round. But the Panthers will move on in this one and this should not be very close. Northern Iowa 41, Lamar 17

Chuck: Defense is likely to be the name of the game in the UNI-Dome, but it’s hard to see UNI getting too burned by Lamar’s big-play offense. If the Panthers keep the big plays off the board, they win easily. Northern Iowa 24, Lamar 14 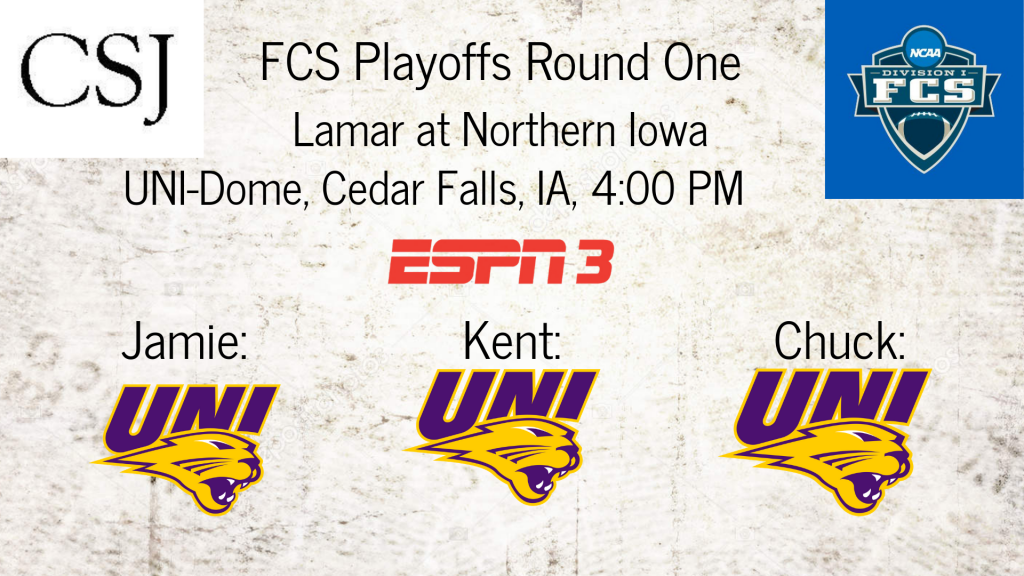