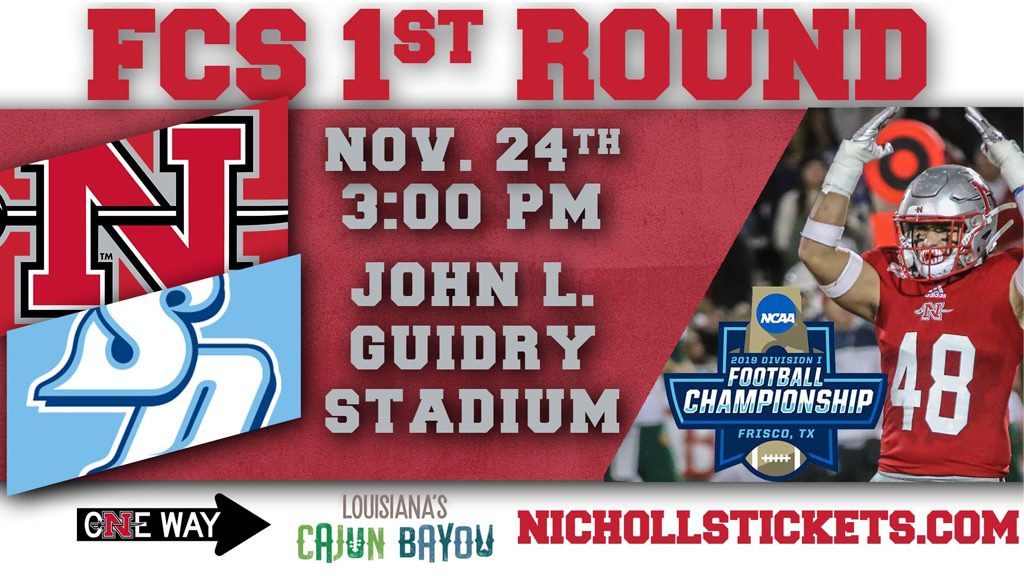 Season Recap: The Toreros, who are playing in their third consecutive FCS Playoffs, won the Pioneer Football League with a perfect 8-0 league record. The last time the Toreros lost a PFL game was back in 2015, when they lost 13-12 to Dayton. Since then, San Diego has won 30 straight league games.

San Diego has also forged a reputation for winning first-round games in the FCS Playoffs. Perhaps because the Toreros have beaten Big Sky opponents two consecutive years (Cal Poly in 2016 and Northern Arizona in 2017), this year San Diego was sent to Lousiaina to face off against a school from the Southland instead.

Playoff Floor: The Toreros visit in the playoffs could be short if they don’t come ready to play against the Colonels.

Playoff Ceiling: Why shouldn’t San Diego go 3 for 3 in three straight 1st round games in the FCS Playoffs? Nicholls certainly could be a victim of the Toreros’ tough passing attack, though a win over Eastern Washington the following week might be a bit much to ask.

Key Player This week: QB Anthony Lawrence is one of the more accurate, prolific passers at the FCS level. The La Mesa, California native has completed more than 2/3rd of his passes with 35 touchdowns and only 7 interceptions on the year. Any Torero upset bid will begin with a big effort from him.

Fantasy Bonus Baby This Week: WR Michael Bandy is Lawrence’s favorite target. He’s notched 1,554 yards receiving and has been on the receiving end of 14 of Lawrence’s 35 touchdown strikes.

Season Recap: Right off the bat Nicholls showed that they were a team to watch in the Southland, upsetting a Power 5 school, Kansas, 26-23. However they’d lose their next two games on the road, to FBS Tulane and Southland title contender McNeese State, showing that their road to the Southland title wasn’t going to be a smooth, bump-free ride.

Where the Colonels have really shown their mettle is the fact that they were undefeated at home, which ultimately was the difference as they won the Southland Conference title and autobid on the final Thursday of the season with a resounding 44-0 win over Rival Southeastern Louisiana.

Nicholls and San Diego have never played in football, but did meet up in men’s basketball recently with the Toreros winning at home, 81-72, on Nov. 20, 2016. The Colonels have played two California programs all-time, defeating Azusa Pacific, 30-28, in 2007 at home. In 2010, Nicholls opened the season at San Diego State and fell 47-0. USD has never played a school from Louisiana, or against any of the current Southland Conference members.

Playoff Floor: Could they lose in the first round to the Toreros, and their tough passing attack? No question.

Playoff Ceiling: Their home field will make them favorites to beat the Toreros, but if they win their reward will be a trip to the cold, red of Roos Field in Cheney, Washington, where their quest for the national championship will likely end.

Key Player This Week: The Colonel defense has been one of the best in the FCS, ranking first in the Southland in points (19.3), total yards allowed (327.0) and rushing defense (102.2), and second in passing yards allowed (224.8). DT Ronald Ollie, who came from East Mississippi CC that was featured on “Last Chance U”, is an important part of this daunting defense, who has 12 1/2 tackles for loss. Nicholls is third in the FCS in tackles for loss with 8.6 per game and is second in sacks (3.64). Even including the two FBS games, the Colonels are 9th in the nation in rush defense and scoring defense.

Fantasy Bonus Baby This Week: Three-year starting QB Chase Fourcade made history Tuesday by being the first Colonel named Southland Conference Player of the Year. A junior from Metairie, Fourcade has started every game since arriving on campus, with the exception of one last season due to injury, and has elevated his play to a new level this season. A dual-threat, Fourcade has thrown for over 2,400 yards with 19 touchdown passes and only six interceptions, and has 488 yards on the ground with a team-high nine rushing TDs. A first-team selection, Fourcade ranks among the nation’s best in efficiency with a 148.5 rating and is 13th in the FCS in points responsible for. He recently broke the program’s previous career record of 67 touchdowns accounted for, set by Doug Hudson in 1986.

Jamie: San Diego has upset Big Sky teams the last two years. Nicholls has been inconsistent for most of the year. But when they’re up, they’re very good. Nicholls 30, San Diego 28

Kent: USD has been a first round upset giver the last two years of the playoffs. But Nicholls is a stronger team and the home field gives them this one in a close game. Nicholls 31 San Diego 28

Chuck: It’s tempting to pick San Diego to win again in the first round, but Nicholls’ home field advantage, and their swarming defense, seems like it might be too much for the Toreros to handle. Nicholls 41, San Diego 21 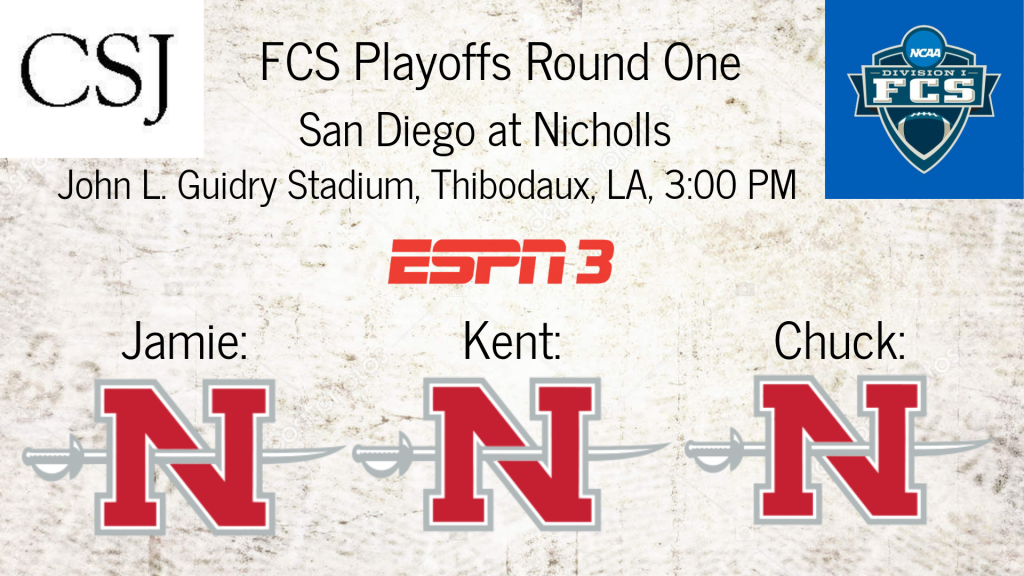