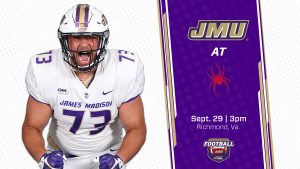 James Madison has won three straight games after their opening weekend loss at NC State. In the three games against FCS opponents, the Dukes have outscored the opponents 141-7, with two shutouts. Last week in their CAA opener, the James Madison defense was dominant. The Dukes had three sacks and nine tackles for loss. There seemed to be a Madison defender in Shonn Mitchell’s face on every snap. Against the Tribe, Jimmy Moreland and Bryce Maginley both returned interceptions for touchdowns in the 51-0 win. This week, the Dukes head southeast to take on the Richmond Spiders. In CAA play in 2017, Richmond game James Madison their toughest game. Trai Sharp scored the winning touchdown with less than a minute left on the clock.

Key Player: DL John Daka has been a fixture in opposing offense’s backfields all season long. Daka has five tackles for loss and has been credited with half a sack. Daka’s most telling stat so far may be his 7 quarterback hurries. With a quick first step, Daka has done a great job creating leverage and working toward the quarterback to rush plays. The Dukes will need Daka to continue that pursuit against Kevin Johnson and the shorthanded Spiders. If Daka and the rest of his defensive linemen can disrupt the Spider quarterback, they can make it a long day for the opposing offense.

Fantasy Bonus Baby: RB Marcus Marshall leads the Dukes in rushing and could be in for a huge day against a below average Richmond run defense. So far this season, Marshall is averaging 8.5 yards per carry and has found the end zone twice, including a powerful 81 yard run against Robert Morris. If given enough carries this week, Marshall could be able to eclipse the 150 yard mark.

The Richmond Spiders come limping into their game against James Madison. Having already lost their starting running back for the season, the Spiders this week learned they would be without their top wide receiver, Dejon Brissett for the remainder of the season as well. The Spiders dropped their CAA opener to Stony Brook 36-10 giving up 335 yards on the ground. The Spiders will need to be much better against the run against the top team in the CAA, James Madison.

Key Player: QB Kevin Johnson is taking over for Kyle Lauletta under center for the Richmond offense. So far, through four games, Johnson has performed admirably. Johnson is averaging 254 yards per game through the air so far this year. Richmond relies on its passing game more than the run, so it is imperative that Johnson protect the ball against a James Madison defense that loves to force turnovers.

Fantasy Bonus Baby: WR Tyler Wilkins had a huge game against James Madison in 2017, with 12 catches for 180 yards and a touchdown. For the Spiders to have a chance at the upset, Wilkins may need to put up similar numbers as the focal point of the offense. He should see enough volume to get him over 100 yards receiving again this week, which also gives him the potential to find the end zone.

Fearless Prediction: Rivalry games like this are usually played close. Just last year, JMU only beat Richmond 20-13. With Richmond’s injuries on offense and their inability to stop the run on defense, the Dukes look to be in for a big day. James Madison 44, Richmond 10.