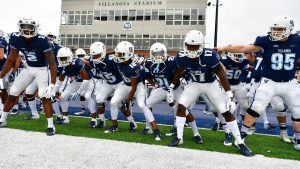 Villanova enters this game 3-1 on the season after handily defeating Bucknell last week 49-7. The one loss, however, is a conference loss to Towson. Villanova can ill afford a second conference loss this early in the season and stay in contention for the CAA title. The Wildcats won their first two games of the season with a solid offense and stingy defense. In their loss to Towson, the Nova offense continued to put up points, but the defense struggled, allowing 45 points to the Tigers. Stony Brook’s and Towson’s offense are much different. Towson likes to thrown the ball to move the offense. Stony Brook tends to keep the ball in the hands of their talented running backs. Villanova is tough against the run, which should help them this weekend. Key Player: LB Jeff Steeb is a team captain and the best linebacker on the Villanova roster. It will be his job, along with his other linebackers, to contain the Stony Brook run game and force Joe Carbone into passing situations. If Steeb and the rest of the Wildcat defense can limit the Seawolves in the run game, they will find success.

Fantasy Bonus Baby: QB Zach Bednarczyk has bounced back from his injury nicely, averaging 285 yards a game passing through the first four games of the season. Stony Brook has a stout defense, but Bednarczyk has shown the ability to move the Wildcat offense down the field this season. 250 yards and 2 touchdowns is not out of the question.

Stony Brook has only allowed 37 points through its first four games this season. Their combination of a stingy defense and a strong running game has led Stony Brook to a 3-1 record to start the season. The Seawolves easily beat Richmond last week, running for 355 yards in the contest. The Seawolves did give up 334 passing yards to Richmond, so the secondary will need to be better in coverage to slow down Zach Bednarczyk and the Wildcat offense.

Key Player: QB Joe Carbone only has a 44% completion rate through four games this season. The Seawolves have not had to rely on him to win games. Carbone will need to be better in the pass game as teams start to stack the box against their strong run game. If Stony Brook gets behind early, it could be a long day. Carbone would be well served to hit a long pass early in the game.

Fantasy Bonus Baby: We went with him last week and it paid off, so we are going to ride RB Jordan Gowins again this week. Gowins was the CAA offensive player of the week last week with 192 yards and 2 touchdowns on the ground. Gowins averages 127 yards per game and 8.4 yards per carry. This week, he faces a tough test against a solid Villanova defense. It wont matter, Gowins will still eclipse the century mark.

Fearless Prediction: The winner of this game becomes the main threat to James Madison in the CAA. Gowins and his backfield mate, Donald Liotine will be the difference for the Seawolves. Stony Brook 24, Villanova 20