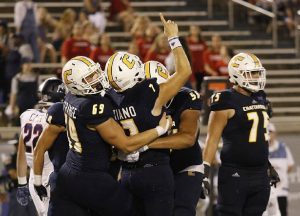 Wofford (4-1, 2-1 SoCon) continues a four-game road trip with a visit to Chattanooga on Saturday in a key Southern Conference match-up. The Terriers’ only loss this season has been to an FBS team, Wyoming, where their 17-14 defeat was decided in the final minite of the game.

The Terriers are off to a fast start under first-year head coach Josh Conklin. They opened with a 28-21 win over The Citadel, and followed that with a 59-14 victory against VMI.

Last season the Terriers earned a 24-21 win in two overtimes over Chattanooga at Gibbs
Stadium.

Key Player: Wofford does it with defense, and though it’s difficult to single out one player that has been eating it up in the early going, CB Devin Watson has proven to be a corner that has shut down the opposition’s passing attack with 3 pass break-ups.

This game is the first time a top 10 team has visited Finley since the Mocs opened the 2015 season against Jacksonville State. Chattanooga is off to a 4-1 start for the fourth time in the last 10 seasons.

The Mocs dropped a tough 17-14 loss at ETSU last weekend. UTC’s 2-1 mark in league play is tied for third in the league race with Mercer.

Each of the last three meetings in the series have been one-score affairs, including Wofford’s 24-21 double-overtime win at home last season. The Terriers scored a 36-28 win in their last trip to Chattanooga in 2016, while the Mocs won on a last second field goal (20-17) in 2015.

Key Player: If you love defense, you’ll probably love this defensive struggle at Finley Stadium this weekend, with the top two defenses in the SoCon facing off. Like Wofford, they have a shutdown corner in sophomore CB Brandon Dowdell, who is third in the SoCon with 7 passes defended already and 2 interceptions – so when Wofford does try to pass, it will be difficult.

Fantasy Bonus Baby: WR Bryce Nunnally leads the Mocs in receiving yards. He already has an eye-popping 721 yards receiving on 38 catches with 5 TDs, and it’s going to be interesting to see how he might be able to get free against Wofford’s tough secondary.

Fearless Prediction: In a huge game for both teams, this game seems destined, again, to go down to the wire. I’m playing a hunch that Chattanooga, with their backs against the wall, and make the SoCon title race very interesting. Chattanooga 21, Wofford 20