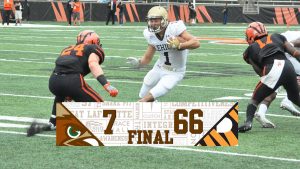 The Mountain Hawk defense yielded 773 yards of offense to the Tigers – a Princeton record – allowing starting QB John Lovett to rush for 111 yards and pass for 288 more, making him responsible for 4 touchdowns, three through the air and one on the ground.

Lovett alone outgained the entire Lehigh offense, who only managed 234 yards as a team. QB Brad Mayes passed for 133 yards and also turned over the ball twice, once through a fumble and another through an interception.

“They scored in a pretty big blaze,” a red-faced Andy Coen said after the game. “We had done a good job of limiting big plays and touchdown runs like that, but I think we had three or four… You’re not going to win when that happens. They’re clearly just a better football team than we are.”

It all started with a beautifully-executed 52 yard run by RB Charlie Volker, who expertly ran through a big hole forged by the offensive line for the first score.

After a fumble set up Lehigh’s tying touchdown, an 11 yard strike from Mayes to WR Austin Dambach in the first touchdown catch of his collegiate career, it was all Princeton as they would score the next 59 points.

WR Steve Carlson would catch 7 balls for 112 yards, and three of Princeton’s touchdowns would come after head coach Bob Surace pulled his starters, with backup RB Ryan Quigley scoring a couple of touchdowns, and the final, agonizing score coming from a pass from fourth-string QB Cole Smith throwing a screen pass to WR Dylan Classi.

It was the most points scored by a Princeton football team since Princeton’s 1950 team, led by eventual Heisman Trophy winner Dick Kazmeier. That year they opened their season by beating Williams College 66-0.

“It’s my job to get them to compete,” Coen said. “We try to develop our guys, do the best job we can, it’s the situation we’re in. You’ve just got to do it, work it, get better, and compete.”

Patriot League play starts next week at home against Fordham, who lost 22-14 to Georgetown.