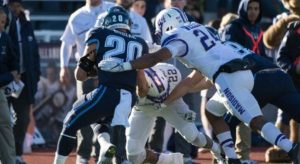 James Madison is coming off of their first conference and home loss of the Mike Houston era. The Dukes never got into a rhythm against Elon and gave up to many big plays, allowing the Phoenix to pull the upset. There will be a lot of film for Mike Houston to pick through to correct what went wrong against Elon.

This week, the Dukes travel to Villanova to face a desperate CAA foe who plays the same defensive scheme as Elon. James Madison was not able to establish the run against Elon, they are going to have to against Villanova. The key for the Dukes on defense will be to maintain their assignments and not give up the volume of big plays that they did last week. The Dukes aren’t out of the race for the CAA or the National Championship, but they will have to put some of their fixes into action immediately this weekend.

Key Player: RB Marcus Marshall is the lead back in the James Madison 5 headed attack in the backfield. The Dukes will want to establish the run much better this week than they did last week against a similar defensive scheme. That starts with Marshall. Marshall has run for 370 yards this season and is averaging 7.5 yards per carry. THe Dukes can get their backs involved in the passing game too. Marshall has proven to be an asset in the receiving game when needed, catching 6 passes for 67 yards and a touchdown so far this season.

Fantasy Bonus Baby: QB Ben DiNucci. When Elon stymied the Dukes run game, Ben DiNucci showed
that he does have the ability to move the Dukes down the field with his arm, throwing for 316 yards and one touchdown. DiNucci did take 5 sacks against Elon, so he has to make quicker decisions with the ball. Villanova will look to take the run game away from the Dukes, but look for DiNucci to flirt with 300 yards again, and be much more efficient this week, added a couple of touchdown passes along the way.

Villanova started the season by beating FBS Temple and many people picked them as the main challenger to James Madison’s CAA crown. However, the Wildcats have had a slow start to their CAA schedule, dropping their first three conference games, the last two by a total of five points. In each of the last two games, Villanova has lost because they have not been able to generate any offense in the fourth quarter.

Quarterback Zach Bednarcyk left the Stony Brook game early after taking a hit on a safety and then did not play against Maine. Bednarczyk expects to start this week against James Madison. If he cannot go, Jack Schetelich will again be under center.

Key Player: QB Zach Bednarczyk is expected to play this week. He missed the game last week against Maine and it showed in the offense. In order for the Wildcats to have any chance in this game, Bednarzcyk is going to have to play, and play well. He has played well against James Madison in the past, so the history is there for a good game. If Bednarczyk cannot go, or cant play the full game, the Wildcats will be in trouble against an aggressive JMU defense.

Fantasy Bonus Baby: RB Aaron Forbes gets the majority of the carries in the Villanova run game. Unlike James Madison who spreads their carries around, Forbes is THE guy for the Wildcats. He should get between 15 and 20 carries and has a good chance to find the end zone at some point in the contest

Fearless Prediction: Both of these teams need this win for completely different reasons. James Madison needs to get back on track after a shocking loss, and Villanova needs a win to just stay in the conversation in the FCS. The more talented team wins this one. James Madison 34, Villanova 13