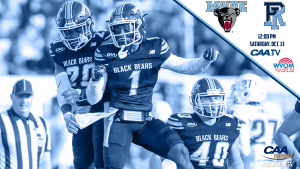 Maine is coming off of a tightly contested win over Villanova, picking up the win on a 52 yard field goal from Kenny Doak at the gun. The Black Bears have been without starting quarterback Chris Ferguson for the last two games after he injured his shoulder against Central Michigan. Ferguson appears to be on target to return to action this week against Rhode Island which should give the Maine offense a boost.

The Black Bears are dealing with a number of injuries, so getting one good player back will do nothing but help the team.

Key Player:LB Sterling Sheffield has been an unstoppable force in the middle of the Maine defense. Sheffield currently leads the CAA in sacks, with 6.5 and tackles for loss, with 9. Having him patrolling the center of the field will make other quarterbacks think twice before taking off to run. A quarter of Sheffield’s tackles this year are for loss, so its apparent that he spends a lot of time around the line of scrimmage. The Black Bears will need Sheffield to be at his best if Rhode Island gets JuJuan Lawson back from a knee injury. If not, it will be Vito Priore who has shown the ability to thrown the ball filling in for Lawson.

Fantasy Bonus Baby: QB Chris Ferguson is the largest part of the Maine offense when he is healthy. Ferguson is working himself back into shape and looks likely to be the starter for the Black Bears this week. With a shoulder injury, Maine will have to watch him carefully in the pass game. Ferguson takes care of the ball and will not throw unnecessary interceptions. Ferguson should be good for 200 plus yards and at least one touchdown this week.

Rhode Island continues to be the surprise of the CAA and FCS on the heels of its 4-1record to start the season. Even losing JuJuan Lawson to a knee injury has not slowed the Rams down as Vito Priore has more than filled the role since Lawson went down. Last week, the Rams destroyed Brown 48-0 to win the Governor’s Cup.

A 2-0 start in CAA play has the Rams positioned for a playoff spot, but the schedule does not get any easier from here. There are no easy games on a CAA schedule, so the Rams need to be ready to play each week, starting this week against Maine.

Key Player: QB Vito Priore should get the start again this week as JuJuan Lawson continues to recover from a knee injury suffered against Harvard. Priore played exceptionally against Brown in last week’s 48-0 win, throwing for 310 yards and four touchdowns. Priore will have to protect the ball against a Maine defense that is extremely aggressive and does not allow a lot of points to opposing offenses.

Fantasy Bonus Baby: WR Aaron Parker caught six passes for 108 yards and two touchdowns against
Brown last week. For the season, he has 29 catches for 439 yards and 4 touchdowns. Along with Isaiah Coulter, Parker forms one of the more dangerous receiving pairs in the CAA. Opposing defenses have their hands with both. Look for a big game out of Parker this week where he will record over 100 yards and a touchdown.

Fearless Prediction: These two teams are the surprise early unbeaten in the CAA and this should be an excellent game. The teams are evenly matched, so go with the home team. Rhode Island 27, Maine 26.