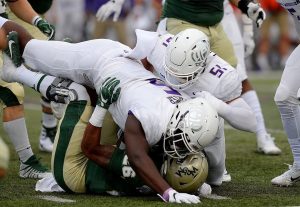 Harrisonburg, VA – From the opening kickoff, the difference in talent between James Madison and William & Mary was apparent.

Every time Shonn Mitchell dropped back to pass, there were white jerseys surrounding him.

James Madison used a dominant defense and an efficient offense to overwhelm the William & Mary 51-0.

The Dukes offense got off to a slow start in the first half, missing two field goals, turning the ball over twice and committing a number of penalties to set the offense back. The Dukes still led the game 17-0 despite the sloppy first half output.

James Madison opened the scoring on a 5 yard touchdown pass from Ben DiNucci to Dylan Stapleton. The Dukes started the drive on the Tribe 9 yard line after Curtis Oliver forced a fumble to set up the short field. On the next JMU possess, following a DeAngelo Amos put return set them up at the Tribe 33, Trai Sharp powered into the end zone on a one yard run. JMU ended the first half scoring on a 30 yard Ethan Ratke field goal.

James Madison held William & Mary to just 52 first half yards. The longest play the tribe could muster was a 27 yard fake punt run on a well execute play.

As usual, Mike Houston and his staff made the proper adjustments at halftime and the offense came out of the gate strong, opening the half with a 12 play 75 yard drive, which culminated in a Riley Stapleton touchdown reception. Less than a minute later, the Dukes were in the end zone again. This time, it was a Jimmy Moreland 56 yards interception return for a touchdown. The interception extended Moreland’s school record to 16 interceptions and was his fifth career pick-six.

The Dukes forced William & Mary to punt again, and the JMU offense went back to work. On a drive that took less than four minutes, the Dukes competed two passes for 6 yards. The ground game took care of the rest of the 68 yards, culminating in a 30 yards Marcus Marshall touchdown. James Madison would add another field goal to make it 44-0.

The final margin was provided by linebacker Bryce Maginley, who took an errant pass in for a 24 yard pick-six.

Dukes Offense Firing On All Cylinders

Offensively the Dukes put up 444 yards including 247 on the ground. No runner was over the 100 yard mark as the Dukes spread out the touches to keep the backs fresh throughout the season. JMU has great depth at the running back position, so this spread should be the norm for the season and should benefit the Dukes down the stretch.

The story of the game was definitely the JMU defense. The Dukes held William & Mary to just 132 yards and forced four turnovers. The defensive line of James Madison was dominant and seemed to live in the backfield of the Tribe to the tune of three sacks and nine tackles for loss. To go along with his pick-six, Moreland added five tackles including one for loss. The strong game earned him CAA defensive player of the week honors.

This week, the Tribe finally play their first home game of the season against Colgate of the Patriot league, while the Dukes head down Interstate 64 for another in-state rivalry game against Richmond.