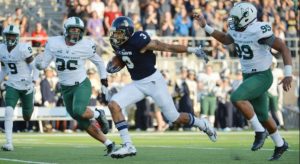 This week we feature the number “3”, as in this is my third stab at trying to pick the the FCS Playoff field.

They say three is a magic number, but unless your thinking about the best No. 3 in the FCS – that happens to be UC Davis’ Keelan Doss, pictured above – it’s hard to say what that means in the world of FCS.

Last week, the No. 3 team in the FCS, South Dakota State, lost a thriller in the Fargodome, 21-17, to the No. 1 team of the FCS, North Dakota State. It was the Jackrabbits’ third game of the season. They are 2-1.

Chattanooga, my pick last week to win the SoCon title, was in line to get their third conference win and potentially make their title bid into a near-formality. Instead, they lost to East Tennessee State – who instead ended up 3-0 in the SoCon.

And 3-3 Prairie View upset 1-3 Grambling 22-16 to win the State Fair classic. (I realize that last game has nothing to do with the playoff picture, but I thought it was cool anyway.)

Few took notice of the 4-1 Seawolves as a serious CAA contender before the season, but I wasn’t fooled at all. With a big core of players returning from last year’s playoff team, I saw them as a definite contender, and this week we put them in the seeding conversation as well after Maine lost to Yale this past weekend.