Compared to previous weeks this week was much tamer.

Villanova raced out to a 21 point lead early only to give it all back in a loss to Stony Brook.

The FCS landscape is starting to take shape as teams enhance their resumes.

The Bison reclaimed what they fell is rightly theirs on Saturday, The Dakota Marker. They did so by defeating South Dakota State in game that was close, back and forth game. As they have done so many times this decade, the Bison closed the game strong, scoring the only points of the fourth quarter while the defense shut down the opposing Jackrabbits. The Bison have no time to breathe, however, as they travel to UNI to take on the Northern Iowa Panthers. If there is one Missouri Valley team the Bison have trouble with on a more regular basis, its Northern Iowa.

James Madison easily rolled over Richmond despite a slow first quarter. The Dukes got touchdowns at all three levels, offense, defense and special teams in a dominant performance. Juwon Hamilton ran back the opening kickoff to give the Dukes a lead they would never relinquish. Jimmy Moreland ran an interception back for a touchdown for the third straight week, outscoring Dukes opponents himself, 18-17 over that stretch. This week the Dukes host Elon in an FCS top 10 matchup.

South Dakota State came up just short of retaining the Dakota Marker, falling by less than one possession. THe Jackrabbits had a 17-14 lead in the fourth quarter but could not hold off the top ranked Bison. THe Jacks proved they can play with anyone in the country and are a threat for the national title. This week, they host Indiana State in a game they should win easily.

Eastern Washington took a 24-10 lead into halftime against Montana State and cruised to the victory. The Eagles have shown recently that they are not just a passing team. Against Montana State, the Eagles picked up 179 yards on the ground. The more balance they get in the offense, the more dangerous Gage Gubrud will be down the stretch. Eastern Washington hosts winless Southern Utah this week, and should keep them that way.

Kennesaw State easily defeated Samford last week. The Owls did just enough, only gaining 286 total yards. THe defense did the job, holding Samford to just 150 yards passing and 272 overall. Until this week, no team has been able to hold down the duo of Devlin Hodges and Kelvin McKnight. The fact that the Owls were able to hold them down to season lows is extremely impressive. This week Kennesaw takes on Presbyterian and will come out of the week 4-1.

Weber State were off this past week as they get ready to play some tough Big Sky games down the stretch. The Wildcats avoid both UC Davis and Montana this season, which should enhance their chances at securing a playoff seed. This week, the Wildcats travel to the elevation of Flagstaff, Arizona to take on Northern Arizona. The Wildcats can’t look ahead to their game the next week against Eastern Washington. The Lumberjacks wont roll over, so Weber has to be ready to go in a tough Big Sky conference.

Wofford easily defeated Gardner-Webb last week. THe Terriers were led by Andre Stoddard who had 200 yards on 20 carries with two touchdowns. As a team, Wofford ran for 490 yards and put up 643 total in a dominant effort from start to finish. This week, Wofford travels to Chattanooga in a very important conference matchup.

Stony Brook showed that they can pass the ball to win games in a win over Villanova. Quarterback Joe Carbone threw for 270 yards and three touchdowns while the Seawolves had a hard time getting the run game going against Villanova. Stony Brook is jockeying to be one of the playoff seeds and will need another big win against Towson this weekend to continue that trek to the top of the CAA and FCS.

Elon continued to assert itself as one of the top teams in the CAA with an easy win against New Hampshire. The Phoenix offense is led by Davis Cheek at quarterback and Malcolm Summers at running back. This week, Elon travels to James Madison to try to make their mark as a potential playoff seed. Last season, the Dukes came to Elon and win 31-3 to win the CAA championship. THe Phoenix will look to avenge that loss this week.

When you have been as hot as UC Davis, the last thing you want is a bye week. But that’s what the Aggies had last week. They will take their rested team to Northern Colorado to try to continue their great start to the season. Keelan Doss has yet to have a big game, but this may be the week he shows his talent and goes for 150 yards or more.

Some weeks, a team just has to get by. That’s what McNeese State did last week in a narrow win against SFA. The Cowboys struggled to put drives together after the first quarter, but the defense stepped up to keep them unbeaten in league play. McNeese will need to be much better against the rest of the schedule. If they clean up their game, the Cowboys should be in line for a playoff seed.

Montana went into an environment where they have not played well in recent years and came away with a win. Each week, the Grizzlies are showing people across the country that they are back in the picture. This week is a very winnable game against Portland State. Montana should go into their matchup with UC Davis 6-1 in a game that will have many playoff and Big Sky implications.

Ahmere Dorsey returned a kickoff 97 yards to provide the eventual final margin in a win for Rhode Island. The return was the second score the Rams had on special teams. Rhody opened the scoring by recording a safety on a botched punt on Harvard’s first possession. Rhode Island hosts in-state Ivy League member Brown this week. THe Rams need to win this one to continue their momentum back into CAA play.

North Carolina A&T started slow against South Carolina State, trailing 16-3 midway through the second quarter. From that point on, Lamar Raynard, Marquell Cartwright and the Aggie defense took charge of the game. After a poor start to the season, Raynard had his best game to date, throwing for 253 yards and three touchdowns. This week, the Aggies play a Delaware State team that they should beat easily.

Nicholls State dominated Lamar from start to finish last week. The offense was led by uilien Gums with 152 yards on only ten carries and one touchdown. Chase Fourcade threw for three touchdowns in the win. Nicholls travels to Northwestern State looking to take their Southland record to 3-1. The hard part of their schedule is over, so there is a strong chance the Colonels finish the season 9-2 which should give them a playoff berth 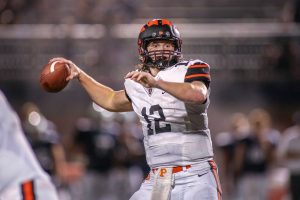 Princeton put together another dominant performance last week by easily defeating Columbia. The Tigers have yet to play a close game. This week they get a visit from a struggling Lehigh team. The Tigers should keep rolling here as well.

Colgate collect its second straight shutout against William & Mary. Through four games, the Raiders have only allowed 20 points. The Raiders should easily win the Patriot League’s automatic bid. Anything can happen on any Sunday, but Colgate should go undefeated the rest of the way until they play FBS Army on November 17th. With enough dominance, could the Raiders wind up with a playoff seed?

Illinois State had a last second field goal blocked and lost to an improving Missouri State team last week. It was night and day for the Redbirds who had defeated and FBS team just the week before. There is no time to sulk, the Redbirds host in-state conference rival Western Illinois. Each team needs a win for their playoff resume.

Maine was missing quarterback Chris Ferguson due to a shoulder injury against Yale and it showed in a lopsided loss. It is not known when Ferguson will be back, but if the Black Bears have playoff aspirations, he needs to be back sooner rather than later. This week, Villanova comes to Orono. A loss for Maine here will make it difficult to find their way into the playoffs. If Ferguson cant go, it will be Isaiah Robinson under center to face the strong Wildcat defense.

Sam Houston withstood a 14 point fourth quarter comeback to defeat Central Arkansas in overtime. The highlight of the game was Dorian Davis’s Odell Beckham-like one handed catch. In the win, Sam Houston may have found their next quarterback. After the struggles of Mike Dare, the Bearkats went with Ty Brock under center, which sparked the team. Brock had 305 yards passing with one touchdown and ran for 73 yards and two more touchdowns. The Bearkats host Stephen F Austin this week in a game that should get them to 3-2 on the year.

Northern Iowa picked up their second straight shutout in their win over Indiana State to open Missouri Valley play. THe Panthers were led by Trevor Allen’s 180 yards and two touchdowns on the ground. This week, business picks up for the Panthers as the top ranked North Dakota State Bison come to the UNIDome. THe Panthers have had some success against the Bison in the UNIDome in recent years, but will need to play a perfect game to come away with a win this time.

Central Arkansas’s 14 point fourth quarter comeback went for naught as they fell in overtime to Sam Houston. The defending Southland champs have an uphill climb to secure a playoff spot, much less a back to back conference title. This week they play Houston Baptist in a game they have to and should win.

Villanova could see their season slipping through their fingers before it even gets started. The Wildcats are now 0-2 is CAA play after a close loss to Stony Brook. Villanova jumped out to a 21-0 lead early in the game, only to give it all back later. This week, the Wildcats travel to Maine in a game where both teams are fighting for their playoff lives. These next two weeks will decide Villanova’s fate. After Maine this week, the Wildcats host James Madison in a game that will be a must win.

Towson easily beat The Citadel last week on the arm and legs of Tom Flacco. Flacco had 253 yards passing and two touch downs. He did just as much damage on the ground, with 185 yards and two touchdowns on just 15 carries. This week, the Tigers host Stony Brook in a CAA game that not many though would have implications in the preseason. A win here would set Towson up nicely for the rest of the season.