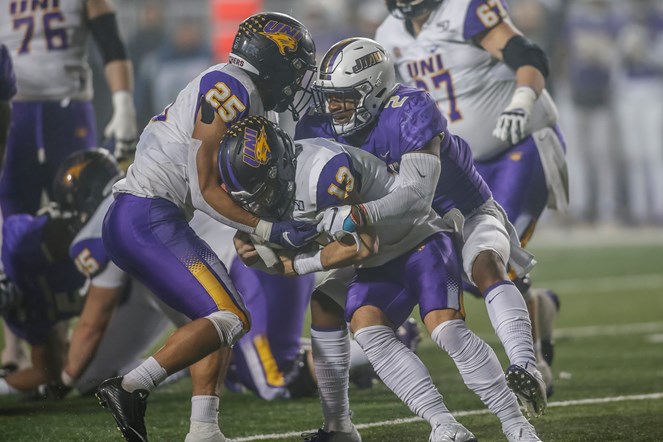 HARRISONBURG, VA – James Madison used a suffocating defense and just enough offense to defeat Northern Iowa 17-0 in the Quarterfinals of the FCS playoffs.

With adverse weather conditions in the area, both teams played generally conservative on offense, not going for the big throw. As a result, the game was decided in the trenches between two excellent defenses.

Northern Iowa held James Madison to its lowest point total and total yardage outputs of the season while registering four tackles for loss and one sack.

On the other side, the James Madison defense was even more dominant. The Dukes pitched the first playoff shutout in school history. The Dukes limited the Panthers, to 114 total yards, and zero yards rushing.

Until the last drive of the game, Northern Iowa had not run a play in James Madison territory and only had 59 yards of total offense. The Dukes defense lived in the UNI backfield, picking up nine tackles for loss and five sacks.

“They played good man coverage and caused enough problems up front and we just couldn’t get anything going on offense,” UNI head coach Mark Farley said.

With his two sacks, DE John Daka increased his season total to 16.5, a school record. Dimitri Holloway, the Dukes’ leading tackler during the season was all over the place on Friday night, registering 8 tackles, 3.5 of which went for loss.

James Madison started quick on offense, but their first drive was derailed by a holding penalty. Instead of putting up points, the Dukes were forced to punt and start playing the field position game. The Dukes immediately showed the dominant defense that would permeate throughout the entire game. Despite an offside penalty, the Dukes forced a three and out.

Continuing their strong offensive start, the Dukes marched down the field and put a touchdown on the board. Ben Dinucci hit Brandon Polk for a 15 yard score to give the Dukes all the offense they would wind up needing in the game.

After the teams exchanged punts over the next few possessions, the Dukes were again able to drive into Panther territory where Ethan Ratke connected on a 42 yard field goal to give the Dukes a 10-0 cushion that they would take into the half and through most of the remainder of the game.

In the first half, two video reviews went in the Dukes favor. On the first play from scrimmage, Juwon Hamilton appear to fumble for a Northern Iowa recovery. A close video review overturned the call saying Hamilton’s knee hit the ground just before the ball coming out. On the first play for Northern Iowa after the Dukes went ahead 10-0, Tyler Hooseman had the ball ripped out of his hand and the Dukes recovered. The replay seemed to show Hooseman’s forearm hitting before the ball was ripped out, but this time the call stood and the Dukes got possession.

From there, the teams traded punts for most of the rest of the game. However, James Madison seemed to keep coming up empty in plus territory, missing two field goals and throwing a backbreaking interception in the end zone when they were trying to protect their lead.

But, the Dukes defense just kept holding the Panthers at bay until UNI was forced to go for a 4th down conversion late to stay in the game. Mike Green was able to sack Will McElvain on the one yard line.

Percy Agyei-Obese then punched the ball into the end zone to provide the final margin.

The JMU defense has been dominant since the fourth quarter of the Villanova game back in October. IN the last three games, JMU has allowed a total of 86 rushing yards over the last three games. In the second round, Pete Guerriero of Monmouth broke off a 93 yard run to account for the total. The Dukes allowed negative seven rush yards against Rhode Island, 93 against Monmouth and zero against Northern Iowa.

On Friday, Northern Iowa had four drives with double digit yards and three with negative yardage.

This week, the Dukes look to continue the strong run of defensive play when they host Weber State in the semifinals. This game will be a rematch of the quarterfinals in 2017 when the Wildcats nearly knocked off the Dukes. Ethan Ratke hit a 46 yard field goal as time expired to send the Dukes to the next round. It should be another defensive struggle, but the Dukes have shown they are comfortable with that type of game.