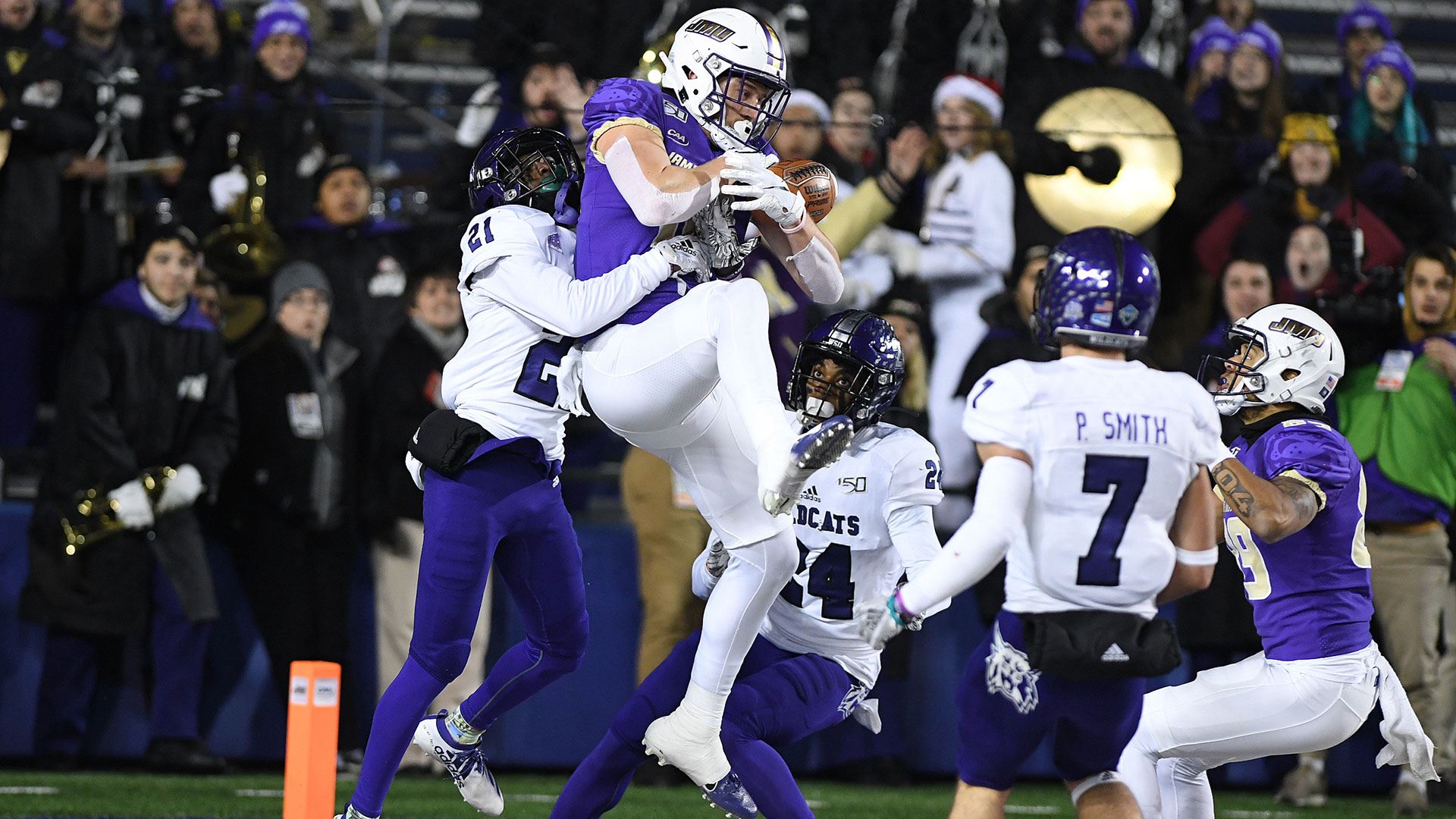 HARRISONBURG, VA – James Madison powered their way to Frisco and the FCS National Championship Game with a decisive 30-14 win at Bridgeforth Stadium this past Saturday.

James Madison was up on Weber State 17-0 (10-0 after one quarter) after their first three possessions and Weber State was shell shocked.

At that point, Weber State had run 9 plays for 11 yards while James Madison had run 32 for 199 yards.

The Dukes opened the scoring on a 32 yard Ethan Ratke field goal following a 12 play drive. After the Dukes quickly go the ball back after a three and out by the Wildcats, QB Ben DiNucci surgically drove the Dukes down the field again, which culminated in an 18 yard strike to WR Riley Stapleton.

After that score, another three and out for Weber resulted in another touchdown drive for the Dukes. This time it was Ben DiNucci taking the ball in from one yard out after a brilliant play action fake allowed him to roll into the end zone. That drive gave the Dukes the 17-0 lead.

After a series of punts for each team, Weber State finally got on the board. Aided by a JMU personal foul penalty, the Wildcats quickly marched 65 yards in five plays. The biggest play on the drive was a 37 yard strike from Jake Constantine to Ty McPhearson. On the next play, Constantine connected with Kevin Smith on a 2 yard touchdown pass.

Just when it looked like Weber State was going to be back int eh game going into the half, James Madison’s Brandon Polk returned the ensuing kickoff 60 yards setting the Dukes up with a short field. After the Dukes got the ball to the 14 on a 20 yard pass from DiNucci to Polk, the wheels came off the bus for the Dukes.

They took a delay of game penalty, a holding penalty and then another delay of game, giving the Duke 4th and 30 from the 34 yard line. Curt Cignetti sent out the field goal unit to try to tack on three before the end of the half. Ethan Ratke’s 51 yard try came up extremely short, but Weber State had called time out to ice the kicker.

Seeing the kick fall short, Cignetti sent DiNucci and the offense back onto the field. As time expired in the half, DiNucci tossed a hail mary toward the end zone where Riley Stapleton used his 6’5” frame to pull in the touchdown catch, giving JMU a 24-7 halftime lead, essentially breaking Weber’s spirit in the process.

The second half was controlled by the Dukes who used their ground game and defense to salt the game away. JMU only added six more points to the scoreboard on two field goals but didn’t allow Weber State to get any traction. The Dukes also blocked a field goal in the second half. The Wildcats provided the final score margin on a Jake Constantine to Ty McPherson 22 yard touchdown.

The Dukes’ win sets up the much anticipated National Championship game against North Dakota State on January 11th in Frisco, Texas.