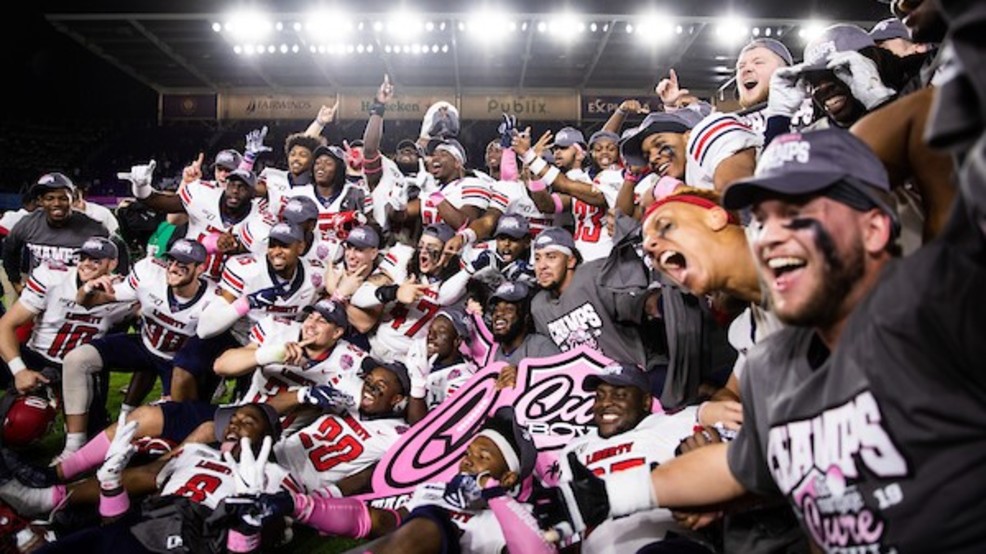 ORLANDO, Fla. – A history-making season at Liberty was capped in the most perfect of ways as the Flames shut down Georgia Southern’s vaunted rushing attack and defeated the Eagles 23-16 to capture the 2019 FBC Mortgage Cure Bowl on Saturday in front of 18,158 fans at Exploria Stadium.

It was the first-ever bowl appearance for Liberty which completed its transition to the FBS in August and was eligible for a bowl game for the first time in school history.

Liberty finished the 2019 season with an 8-5 record, while Georgia Southern ended with a 7-6 overall record.

Defense was the story in this game as Liberty held Georgia Southern to 154 yards on the ground, well below its season average of 261.5 yards per game. The Eagles were the No. 8 team in the country in rushing offense heading into the contest.

Liberty, meanwhile, had trouble defending the run during the regular and had allowed an average of 192.7 yards per game, 100th in the nation in that department.

That all changed on Saturday in Orlando.

It took some time for either team to get untracked on offense. Liberty achieved that goal the earliest, but needed to turn things over to the defense in order to secure the victory.

Liberty, which scored 16 consecutive points in the game, got a 14-yard scoring pass from QB Stephen Calvert tossed to Antonio Gandy-Golden, who went over the top of a defender to corral the ball to put the Flames in front 23-7 early in the third quarter for what would prove to be the final points of the game for the Flames.

The rest of the afternoon belonged to the defense as the Flames were guilty of turning the ball over twice, but the Eagles were unable to cash in.

The Eagles managed just two field goals by Tyler Bass, from 28 and 30 yards, to pull Georgia Southern to within 23-13 heading into the final period of play. The bend-but-don’t-break defensive approach by the Flames continued in the final quarter as Liberty managed to keep the Eagles out of the end zone. Bass’ third field goal, this one from 35 yards out, pulled GSU to within 23-16 with 1:48 left to play in the game, but the Flames were able to run out the clock to end the game.

Liberty’s defense in the first quarter proved to be a harbinger of things to come on the day.

The Flames forced Georgia Southern into three straight three-and-out series to start the game. That proved to be a harbinger of things to come on the day.

Tight end Johnny Huntley got Liberty on the board first when found himself wide open to catch a touchdown pass from Calvert that covered 57 yards with 3:31 to play in the first period to give the Flames the early lead.

Georgia Southern responded on the first play of the second period when Wesley Kennedy capped a sustained drive with a 10-yard scamper to tie game. The scoring drive took seven plays and covered 79 yards.

Lightning struck in a hurry for Liberty on the next possession when Joshua Mack ran in from three yards out to put the Flames in front 13-7 just 91 seconds after the Eagles had tied the game. The scoring drive was helped by two long passes from Calvert. The first covered 30 yards to Noah Frith and Demario Douglas caught an 18-yard pass to set up the go-ahead score.

Alex Probert booted a 46-yard field goal with 1:02 left in the half to put the Flames in front 16-7 at the intermission.

Liberty’s defensive end Jessie Lemonier was voted the MVP of the game. He finished with eight tackles, including a pair of sacks. He finished his two-year Liberty career with 20.5 sacks to rank third in program history in that department.

Lemonier was not the only Flame to shine bright on defense. Senior Solomon Ajayi led the Flames with nine tackles on the day, while teammates Benjamin Alexander and TreShaun Clark matched Lemonier with eight stops of their own.

Calvert also capped his collegiate career by completing 16 of 35 pass attempts for 270 yards and the two touchdowns. A four-year starter at Liberty, Calvert is the program’s all-time leader in passing yards (12,025), completions (896) and touchdowns (93).

Gandy-Golden had five catches on the day for 63 yards. He, too, was playing in the final game of his career and leaves Liberty as the school’s leader in receptions (240), receiving yards (3,814) and touchdown catches (33). He is scheduled to play in the 2020 Senior Bowl next month.

Running back Frankie Hickson finished the day with 120 yards on 22 carries to lead all rushers in the game. It was the ninth 100-yard game of his career and gave him 1,021 yards on the year, the second straight year he surpassed the 1,000-yard plateau.

Georgia Southern was unable to get its pair of standout running backs untracked throughout the game. Kennedy managed just 64 yards on nine carries and J.D. King was limited to 28 yards on 10 carries on the day. QB Shai Werts completed just 10 of 19 passes for 95 yards. He was picked off once, his first interception in more than two years. Werts also ran 22 times for 57 yards on the afternoon.