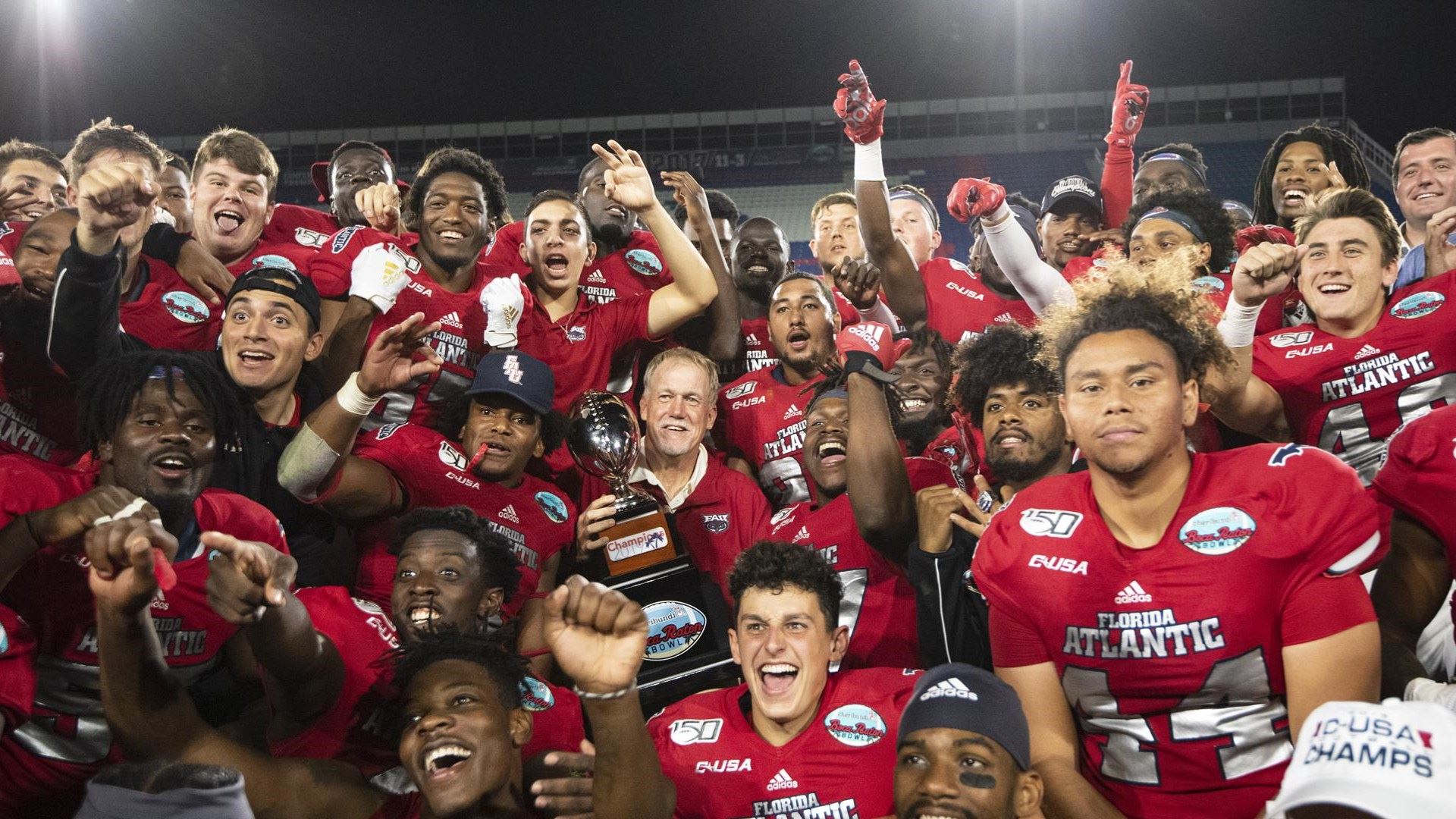 It was the fourth bowl win in as many tries in program history for Florida Atlantic, which played for the first time since Lane Kiffin resigned to take over at Mississippi earlier this month.

“It was all about preparation, execution and finish” said interim coach Glenn Spencer after leading the Owls to the triumph over the Mustangs.

FAU finishes the season 11-3 with the win, while SMU ends the season with a 10-3 overall mark.

QB Chris Robison passed 12 yards to John Mitchell on a fourth-down play deep in SMU territory to keep a late first-quarter drive alive. The Owls capped the drive moments later when BJ Emmons scored from one yard out to put FAU in front 7-0 with 3:11 remaining to play in the opening period. The drive consumed 74 yards in 13 plays.

SMU managed to drive deep into FAU territory and had a chance to tie the game. A false start penalty moved the Mustangs back and a 38-yard field goal attempt was blocked to keep the Mustangs off the board.

SMU did manage to tie the game 7-7 early in the second quarter on a Xavier Jones scored from one yard out. The scoring drive was set up after the Mustangs had recovered an FAU fumble at the Owls’ 29-yard line.

James Charles capped a 57-yard drive for FAU by scoring on a one-yard run with 7:48 to go in the first half. Robinson completed three passes for 33 yards in the drive and running for an 11-yard gain to help keep pressure on the Mustang defense.

The see-saw affair was tied for the second time moments later when Jones scored his second touchdown of the game with 2:12 remaining in the first half.

What happened in the final two minutes was akin to a bull rush as far as the Mustangs were concerned.

Charles ran 15 yards for his second touchdown of the quarter as FAU regained the lead 21-14. Rashad Smith intercepted a Shane Buechele pass on the next play and returned it 22 yards to the Mustang 13-yard line. That set up a Robison-to-Brandon Robinson pass with 36 seconds left in the half to put the Owls in front 28-14 at the intermission.

The second half was virtually all FAU and the Mustangs had few, if any, answers.

Robison threw an 18-yard scoring pass to John Raine to increase the FAU lead to 35-14 midway through the third quarter. Smith recovered an SMU fumble and returned it 34 yards for another score as the Owls increased their advantage to 42-14. Vladimir Rivas kicked a 38-yard field goal early in the final quarter to put the score to 45-14 in favor of the Owls.

SMU managed to close to within 45-21 when running back Ke’Mon Freeman tossed a two-yard pass to Ryan Becker, but a 23-yard pass from FAU backup quarterback Nick Tronti to Javion Posey with 3:17 left in the game made it 52-21.

Beuchele managed his only TD pass with just over one minute remaining in the game when he found James Proche for 22 yards.

Chris Robison completed 27 of 37 passes for 305 yards and a pair of touchdowns to lead the Owls. He added 28 yards rushing and was voted the offensive MVP of the game. Robison finished the season with 291 completions and 3,701 passing yards to surpass the previous season-best marks held by Rusty Smith since 2007.

Emmons led the way in rushing with 72 yards on 17 carries, while Robinson had a team-high 78 receiving yards on five receptions and Raine hauled in a team-best seven passes for 73 yards.

Smith was the star of stars on defense for the Owls. He registered 11 tackles in the game and had a pair of takeaways on his way to earning defensive MVP accolades.

Beuchele finished the day with 303 yards through the air after completing 27 of 47 attempts. Kylen Granson caught seven passes for 93 yards and teammate Proche added 86 yards on nine receptions. Freeman was the top rusher for the Mustangs with 52 yards on 15 carries in the game.