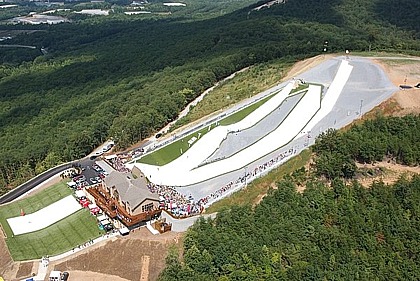 When Liberty made a surprise announcement at 5:00 On Thursday, February 16th, Liberty University got word from the NCAA that their waiver to allow them to transition to FBS scholarship limits was granted. Starting with the upcoming season, the Flames would be able to start transitioning to competing as an FBS Independent.

As I was reading their press announcement, I thought about the late NEC commissioner, Brenda Weare.

Ms. Weare, gone too soon at the age of 51, did something very important for the limited scholarship conference: she lobbied the FCS playoff subcommittee to allow her conference access to the FCS postseason.

Her argument wasn’t so much that the NEC’s champion was ready to win the FCS national championship right then and there, though NEC teams did have some impressive upsets on their resume. The main thrust of her argument was that the NEC met all the rules that the FCS playoff subcommittee outlined for their playoff participants, and that there was not any reason to deny them access to the FCS playoffs.

It felt like a similar process played itself out for the NCAA in regards to granting Liberty a waiver to start the process of transitioning to FBS, as well – and, perhaps as an unintended consequence, saving FCS football as well.

In the NCAA’s evaluatuon of the Liberty’s pitch for FBS football, it seems like an emotionless rationale was used.

“NCAA general counsel Donald Remy told CBS Sports that the decision to grant Liberty’s request ‘was made based upon the capability of the institution to meet the requirements of FBS membership, which don’t include evaluation of any past, present or future personnel.‘” Dennis Dodd of CBS Sports notably mentioned this week (emphasis added).

In other words, this means the NCAA’s decision to grant the waiver was less a function of their feelings about the current Liberty Athletic director and their staff and more a dispassionate analysis of Liberty University’s ability to meet the “requirements”, such as they are, to compete as an FBS school.

They seemed to evaluate Liberty’s fitness to be an FBS program by things like attendance at football games (well over the 15,000 average expected), number of sports sponsored, undergratuate enrollment (15,000 on campus), and probably financial fitness (over $1 billon endowment, with a “b”).

They appeared to not take into consideration Liberty President Jerry Falwell, Jr.’s controversial hiring of former Baylor athletic director Ian McCaw, whose name has appeared on a federal lawsuit for “willful indifference” for a victim’s plight after learning of rape allegations against former Bear players.

“Football Oversight provided input, but it was not our decision,” oversight committee chair Bob Bowlsby told Dennis Dodd at CBS Sports. “I don’t remember a concern arising during the meetings I was in.”

By hiring someone like Ian McCaw to run their athletic department, Liberty certainly wasn’t out to make any friends, and when it was happening, it seemed like such a move would prevent them from ingratiating themselves to another FBS football conference, which was the one requirement that Liberty seemed to lack when it came to FBS membership.

It must have infuriated Liberty to no end when their former Big South conferencemate, Coastal Carolina, was chosen to become a member of the FBS-level Sun Belt conference.

If you look at Liberty University, their athletic program and their institution, and don’t look at the folks at the top, there’s no question that they look and feel like an athletic program that can support FBS football.

In 2014, Liberty ranked fifth nationally in attendance at the FCS level, averaging more than 17,000 fans a game.

That year, the Flames spent more on their athletic program than another University in Virginia that is already an FBS program. Liberty spent $29 million compared to Old Dominion’s $24.7 million, and the Flames sponsored more sports (20) than the Monarchs (18).

Liberty’s athletics program was spending like an FBS school, had facilities like a low-level FBS school, and had as a part of their athletics charter to essentially become an FBS school. Whatever you say about Liberty, whenever asked, they repiled that their naked ambition was to compete as an FBS school, doing whatever it took in order to do so – applying to FBS conferences for membership, and spending unbelievable amounts of money to show that they could play by the unwritten expensive rules that the Power 5 schools have tacitly established for themselves.

From their raw spending numbers to their Snowflex Center, their year-round, artificial snow mountain for skiing and snowboarding, nothing about Liberty’s athletic program looks or feels in any way like a “cost containment” school, which many FCS schools consider themselves.

And that’s why Liberty had to be up in arms when Coastal Carolina was chosen over them to join the Sun Belt, a school who never met the minimum NCAA requirements for FBS membership in terms of attendance. Coastal Carolina wasn’t required to make public any assurance that they can support a move to the FBS, and as of today is still not ready yet to be a full-fledged FBS school.

It had to have been the reason why Liberty asked for the waiver. How is it fair that Coastal Carolina, whose facilities can’t even support the minimum attendance requirements for FBS football, is allowed a fast track to FBS membership, while Liberty, who can demonstrate that they can support it financially, isn’t allowed because they don’t have a conference invite?

In a way, the NCAA granting Liberty their waiver has to be seen as an acknowledgement that their method of allowing FCS schools to transfer to FBS is broken. The Sun Belt took a school that couldn’t currently meet FBS requirements; nothing in the rules said that it could be prevented. Liberty was stuck in FCS, while spending like a Power 5 school; nothing in the rules said they could start their transition. I hope that the NCAA takes this opportunity to reform their quirky process.

But the NCAA’s granting of Liberty’s waiver undoubtedly are having, many, many FCS programs whispering a “thank you” towards the NCAA offices in Indiana.

Because Liberty, whether they realize it or not, was a destabilizing force inside the FCS.

Their decision to allow full cost of attendance scholarships put enormous pressure on the other teams in their conference to increase spending in order to try to somewhat keep pace, if not the entire subdivision.

Even though Liberty never truly competed for an FCS National Championship with all their resource advantages, in the areas of facilities and athletics recruiting, their presence always loomed.

Liberty never really seemed like a part of FCS, cost-containment football, because nothing about their vision had anything to do with cost-containment. To Liberty, FCS was a sort of purgatory while waiting for some FBS conference to respond to their advances.

And it seems like the NCAA acknowledged this point. Why keep Liberty in the FCS when it doesn’t want to be there, and its presence only serves to force others to spend recklessly? If they can support it financially, and don’t want to join a conference, why not let them?

The happy effect of this is that an FCS without Liberty seems to restore some order to the subdivision.

Though the pressures of athletics spending are never completely gone, Liberty’s Snowflex center and full cost of attendance scholarships are no longer looming in FCS vs. FCS recruiting battles. When Charleston Southern recruits football players, they no longer have the pressure to offer the same in order to keep up with their conferencemate that is spending Michigan money.

The Flames’ move makes FCS look more like the cost-containment that it was supposed to be, not the FBS-in-waiting purgatory that it ended up being for schools like Liberty.

The FCS is stronger when it is a group of like-minded schools with the same series of overall goals – schools that share a mission statement and share a commitment to spending within certain limits. Liberty never signed up for that mission statement, and for that reason alone the NCAA did a huge favor for every school in the subdivision to allow Liberty to go where it wanted.