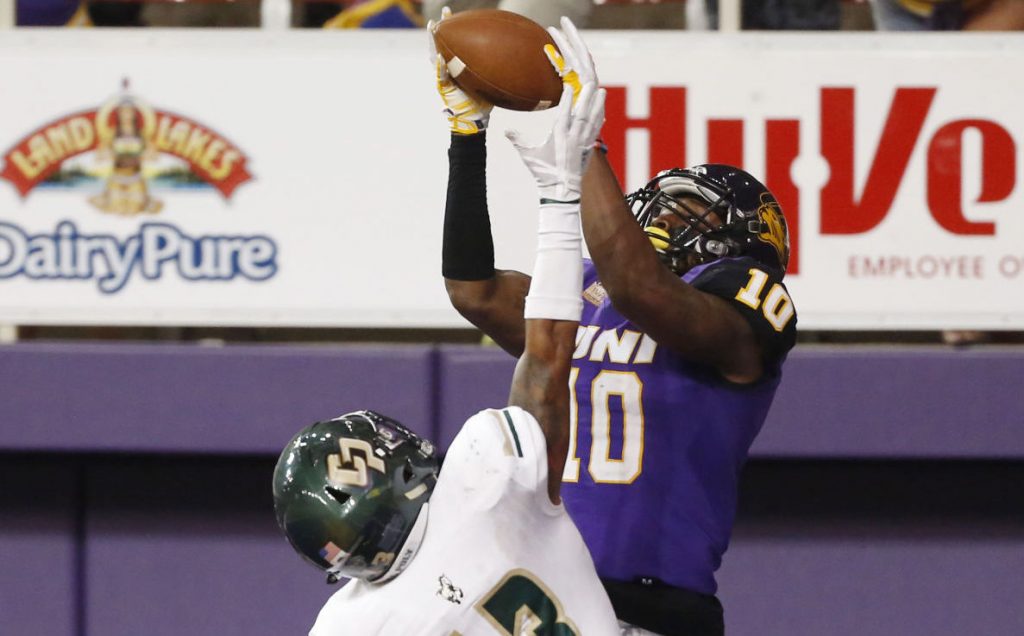 No. 2-ranked North Dakota State rushed for 375 yards and rolled to a 40-13 victory over No. 6-ranked Eastern Washington in a key non-conference football game Saturday, Sept. 9.

Bruce Anderson had 160 yards and one touchdown and Lance Dunn ran for 148 yards and three TDs for the Bison, who averaged 6.0 yards per carry. NDSU (2-0) outgained Eastern Washington in total yards 532 to 204.

Strong safety Robbie Grimsley intercepted two passes and broke up two others for the NDSU defense, which slowed Eastern Washington’s up-tempo offense to just 54 plays. Cornerback Jalen Allison and linebacker Chris Board each had a team-high five tackles.

The University of Richmond football team (1-1) took the best shot Colgate (1-1) had to offer on Saturday afternoon at Andy Kerr Stadium, but had answers down the stretch and found a way overcome a 14-7, second half, deficit to pick up a gritty, 20-17, victory on the road.

Three different Spiders on defense all recorded 10 tackles but it was Andrew Clyde’s star that was shining brightest. The junior from Dallas, Texas posted 10 tackles, five solo to go with half a sack, 1.5 tackles for loss and a pair of pass breakups. Micah Keels and Justin Rubin joined Clyde with 10 tackles.

Davis Cheek threw for 301 yards and three touchdowns and Owen Johnson hit a 36-yard field goal with five seconds left to lift the Elon Phoenix to a 34-31 victory over former Southern Conference rival Furman at Paladin Stadium on Saturday, Sept. 9.

The win was the first of Coach Curt Cignetti’s Elon career as the Phoenix improved to 1-1 on the year. The loss dropped the Paladins to 0-2.

South Dakota quarterback Chris Streveler accounted for 425 yards and four touchdowns, and the Coyote defense had four sacks and forced three turnovers in pulling off a 35-27 upset of Bowling Green Saturday at Perry Stadium.

Michael Fredrick with a 17-yard touchdown run to push the Coyotes lead to 16 points at 35-19 with 9:43 remaining in the game! #GoYotes pic.twitter.com/sP6pAcDhO4

South Dakota State kicker Chase Vinatieri booted a career-long 47-yard field goal and scored what proved to be the decisive touchdown on a fake field goal to lift the fourth-ranked Jackrabbits to a 31-27 victory over Montana State Saturday night at a sold-out Bobcat Stadium.

SDSU improved to 2-0 overall, while the Bobcats dropped to 0-2.

This kicker can do it all!

Chase Vinatieri silenced the crowd in this #NCAATop10 touchdown run

The 2017 Southern Heritage Classic went down to the final second as the Tennessee State football team topped Jackson State, 17-15, on Saturday Night at the Liberty Bowl. A fourth-quarter 58-yard punt return for a touchdown by Patrick Smith proved to be the difference in the game.

Davion Davis and Javin Webb each had a pair of touchdowns for the Kats (2-0), but it was a key kickoff return by Jaylen Harris in the third quarter that spelled a Panther (0-1) loss before the Sam Houston defense caused a pair of turnovers on the final two drives of the game to hold on for the win.

The Panthers were playing in their season opener after having their intended season-opening game against Texas Southern postponed due to Hurricane Harvey, but they were still able to churn out 499 yards of offense behind 291 yards of total offense by quarterback Lavell McCullers.

Propelled by career days from quarterback Eli Dunne and wide receiver Daurice Fountain, the 21st-ranked Northern Iowa Panthers (1-1) defeated Cal Poly (0-3) in a shootout, 45-38, to open the home slate on a high note.

Dunne and Fountain connected for three scores – including the game winner – as the Panthers earned their first overtime victory since 2011 (Nov. 19 at Illinois State).

Dunne finished the game going 25-for-40 with 325 yards passing and four touchdowns through the air. The four scores were the most for Dunne since tossing three last week against Iowa State.

The University of Dayton football team held off Southeast Missouri for a 25-23 win Saturday at Welcome Stadium. Senior running back Tucker Yinger, who had his second-consecutive 100-yard rushing game, led the Flyers with 24 carries for 141 yards. Freshman placekicker Patrick Sandler tied the Dayton single-game record with four field goals.

The Dayton secondary came up big, with two interceptions in regulation and another by Jack Crain on a two-point conversion attempt that would have tied the game with 46 seconds left. UD safety David Leisring led the Flyers defensively, with 13 tackles, one pass breakup and the game’s first interception.