Week 5 saw many of the Group of Five conferences getting into conference action. This week I will go through each of the five conferences to give a highlights from each conference, as well as the five G5 independents.

Overall, the Group of Five lost two undefeated team with UAB and Navy falling out of the group of undefeated teams. Boise State (who was off this week), Appalachian State (defeated Coastal Carolina), SMU (defeated USF), and Memphis (defeated Navy) are now the four G5 teams without a loss. UAB lost its CUSA conference opener at Western Kenutcky. These four schools are the ones to watch going forward to get

SMU is the highlight and suprise thus far in the AAC. The Mustangs sit at 5-0 following its blowout conference opener over South Florida. This is the first 5-0 start for SMU since the the 1983 season (one that featured Eric Dickerson and Craig James).

UCF bounced back this week following its one point loss to Pittsburgh a week ago with a blowout win at home over Connecticut. Temple also bounced back with its suprising loss at Buffalo last week with another win over a Power Five school in Georgia Tech (previously defeated Maryland as well).

Houston also got its first FBS win this week following the suprising announcements this week of senior quarterback D’Eriq King and senior receiver Keith Corbi. Both are using the NCAA rule that allows redshirts to play four games in its redshirt year that will not count towards their eligibility. The Cougars started Clayton Tune under center but it was RB Patrick Carr ran that shined with his 139 yards rusning and three touchdowns that shined in its 45-39 win at North Texas.

Cincinnati won suprising easily at Marshall 52-14. The Bearcats started strong, scoring 14 points in the first quarter and continued to a 28-0 halftime lead behind QB Desmond Ridder’s best performance of the season. The redshirt sophomore tied his career high with four passing touchdowns, while throwing for 221 yards and rushing for 48 more.

ECU was the only other AAC team in action and went above the .500 mark by holding on for its road win at Old Dominion 24-21. The three wins so far this year surpasses the past two seasons win total already under first year head Mike Houston (the former FCS national title coach while at James Madison).

Louisiana Tech looks like the class of the Conference USA so far with its 4-1 start especially following the UAB loss to WKU this week. The Bulldogs, however, had its hands full this week at winless Rice. The Bulldogs trailed by three late into the game but Bailey Hale kicked a 31-yard field goal with just over a minute left in regulation time to tie the game that sent the game to OT. Rice hit a field goal to take the lead in the first frame of the extra period but J’Mar Smith ran for a 12-yard touchdown for the 23-20 victory.

UAB outgained Western Kentucky in total yardage 298-222, but had four costly turnovers, all of which were interceptions. Tyler Johnston III was 18-of-31 for 181 yards and the four interceptions. The Hilltoppers QB Ty Storey made his first start in a WKU uniform and threw for 189 yards and two touchdowns to lead to the 20-13 win.

Southern Miss and FAU each won their conference openers easily. The Golden Eagles defeated UTEP 31-13, while the Owls defeated Charlotte 45-27.

The only Power Five game this week in C-USA saw Middle Tennessee get handed a blowout loss at the Big 10’s Iowa. The Blue Raiders gave up 17 first quarter points and managed just a field goal in the third quarter in the 48-3 loss.

The other three games this week were all against the AAC and all were losses as mentioned in the AAC section for Old Dominion, Marshall, and North Texas.

Toledo had the highlight win for the league of FBS Independent BYU this week. The Rockets won a back-and-forth game. With the score tied, 21-21, Toledo was driving for the go-ahead touchdown when BYU recovered a fumble with 1:09 left in the game. However, on the very next play Robinson picked off BYU QB Zach Wilson at the BYU 42-yard line and returned it to the two. Junior RB Shakif Seymour scored on the next play, giving Toledo its first lead since a 3-0 edge in the first quarter for the 28-21 win.

After falling behind 14-3, the Miami’s defense stepped up and turned in a dominant performance in a 34-20 victory over Buffalo. The RedHawks’ picked up four turnovers, returning one for a score, to win their MAC opener for the third-straight season. This was a week after Buffalo defeated the AAC’s Temple.

For the seventh time in the last nine years, the Victory Cannon will stay in Kalamazoo as Western Michigan defeated in-state rival Central Michigan, 31-15.The Broncos amassed 432 yards of total offense, gaining 244 through the air and 188 on the ground. WMU’s defense held CMU to 107 rushing yards and just 15 points, all coming in the fourth quarter.

Northern Illinois was the lone MAC team to play a Power Five school this week with its visit to the SEC’s Vandebilt but fell 24-18. After spotting the Commodores a 14-0 lead in the first quarter, NIU outgained and outscored Vanderbilt the rest of the way before a fourth-quarter comeback was thwarted by one of those key plays. At first and 10 on the Vanderbilt 46-yard line, NIU quarterback Ross Bowers couldn’t handle the snap and then attempted to pitch to wide receiver Michael Love, who was dropped for seven more yards. The play put the Huskies in a second-and-26 hole. The Commodores got the ball back with 3:10 to play and were able to run out the clock to pick up their first win of the season.

Akron remained winless on the season in its visit to FBS Independent UMass and the story can be shown in that section.

All other MAC schools had a bye this week.

The MWC split a pair of nonconference contests as New Mexico fell at Liberty while Fresno State defeated New Mexico State also on the road.

Utah State improved to 2-0 in MWC play for the fourth time in seven years in the league. Overall, the Aggies are 3-1 for the second-consecutive year after handling visiting Colorado State 34-24. RB Gerold Bright led the Aggies offense with a career-best 179 rushing yards.

Wyoming opened the season 4-1 for the first time since 2007 with its easy victory over UNLV 53-17. QB Sean Chambers recorded his first multi-touchdown passing game of the season. In total, Chambers rushed for 102 yards and two scores and threw for 124 yards and two touchdowns.

Hawai’i also had an easy conference win at Nevada 54-7. QB Cole McDonald completed 25-of-30 passes for 312 yards and four touchdowns. McDonald’s favorite target was senior Cedric Byrd, who scored three touchdowns on seven receptions and finished with 87 yards. The Rainbow Warriors improved to 3-1 to start the season for the second straight season.

On Friday, Air Force also moved to 3-1 after the Falcons racked up a season high 513 yards of total offense in beating San José State 41-24. RB Taven Birdow was the offensive star after rushing for 124 yards and two touchdowns.

New Mexico fell to Liberty 17-10 and will be highlighted in the Independents section.

Appalachian State remained the lone overall undefeated team and overcame over a two hour weather delay in its 56-37 conference opening win at home over Coastal Carolina. QB Zac Thomas had two touchdown passes while throwing for 246 yards to lead the way.

Louisiana won back-to-back road games and their first win in a conference opener since the 2016 season in defeating Georgia Southern 37-24. Elijah Mitchell and Trey Ragas each ran for two touchdowns to lead the Ragin’ Cajuns offense.

Arkansas State won an offensive shutout game at Troy 50-43 in a game of preseason conference hopefuls. In his first career start, freshman QB Layne Hatcher carved up the Troy defense for 440 yards on 25-of-35 passing with four touchdowns. Hatcher put up these number by finding six different receivers, most notably to three 100-yard receiving performances by Omar Bayless (213), Jonathan Adams (105) and Kirk Merritt (103). Bayless’ career-best 213 yards stands as the third-most in program history. 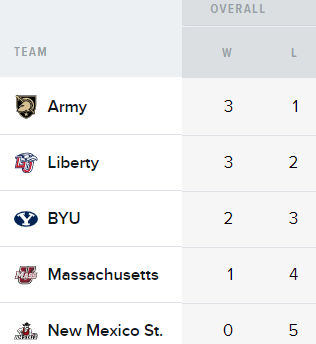 Four of the five G5 independents were in action this week with the group going 2-2 on the week. UMass and Liberty picked up victories while BYU and New Mexico State were handed losses by their G5 opponents.

UMass picked up its first victory of the season in its home win over the MAC’s Akron 37-29. Minutemen QB Michael Curtis threw for two touchdowns and ran for another in his first start to highlight the UMass offense. Curtis, who had 242 all-purpose yards, was starting in place of former starter Randall West, who was one of six players sitting out due to a team suspension this week.

Liberty prevailed in a 17-10 victory over New Mexico in a suprising defensive struggle. The two teams each averaged over 30 points and both had over 50 points in their last contests. WR Antonio Gandy-Golden was the offensive star for the Flames. He had a touchdown grab as time expired in the first quarter and the senior became the program’s all-time career leader with 28 career touchdown receptions. He finished the night with six receptions for 144 yards and a touchdown. It was the third straight win for Liberty and the first such streak as an FBS squad.

BYU lost at the MAC’s Toledo 28-21, while New Mexico State remained winless in its 30-17 loss to Fresno State.

Here are my top five games this week with video highlights of each.