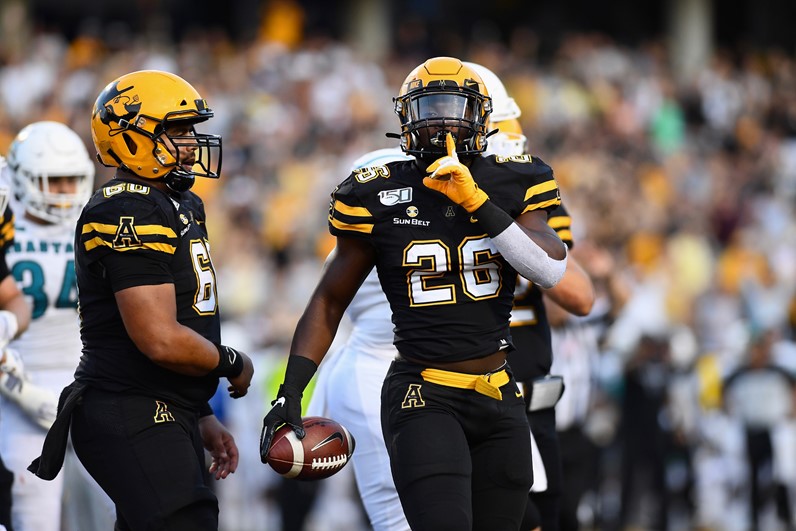 One of the longest days in Appalachian State football history gravitated well into the evening as the Mountaineers opened their Sun Belt Conference opener against Coastal Carolina.

But even a two-hour and three-minute lightning delay couldn’t slow down the ASU attack in the 56-37 victory over the Chanticleers.

Junior QB Zac Thomas hit 19-of-23 passes for 246 yards — 223 in the first half alone — with two touchdowns and an interception as the Mountaineers outdistanced CCU in this track meet of a game before the sellout crowd of 25,055 at Kidd Brewer Stadium.

That balanced App State offense was also sparked by outstanding special teams performances as the Mountaineers (4-0 overall, 1-0 in conference) began defense of their SBC championship.

Darrynton Evans returned four kickoffs for 132 yards and added 15 carries for 60 yards and two TDs rushing on a date where the potent Mountaineers ran for 184 yards. Marcus Williams came off the bench for eight attempts and two scores and Daetrich Harrington led ASU rushers with 11 carries for 71 yards and still another touchdown.

Thomas Hennigan got into the special teams act with a combined 54 yards on three returns as Appalachian overwhelmed Coastal Carolina 149 to minus-four in return yardage. Hennigan also snared five passes for 89 yards and nearly made an over-the-shoulder TD catch of Malik Williams’ beautiful, option, double-pass.

Demetrius Taylor, coming off national defensive player of the week honors in last week’s 34-31 victory at North Carolina, partially blocked a punt to set up a touchdown and the unsung place kicker Chandler Staton kept the Chanticleers pinned deep all game long with eight of his nine kickoffs resulting in touchbacks.

“In order to be a complete team, you’ve got to be good on special teams,” Drinkwitz said. “We needed to have a decisive advantage.”

It was a stellar day for the App State receivers, which Thomas has repeatedly called perhaps the best pass-catching group in the country.

“We pride ourselves on having great receivers,” Thomas said. “They work hard every day in practice. Realistically, it makes my job easy. You are always going to have someone open.”

Just five minutes after Reed’s TD, fans were scurrying for safety and the players and coaches were exiting for the locker rooms with lightning bolts flashing for an hour and a half in the vicinity of Boone.

Appalachian played a game of similar length in its season-opening 53-7 loss at Wyoming in 2004 and endured a shorter thunderstorm delay in a 66-0 victory at home against Campbell in 2014.

After the prolonged break — just the third weather-related delay in ASU football history and only the second ever at Kidd Brewer Stadium — the Chanticleers rallied for a score on CJ Marable’s 42-yard dash to knot the game at 14 with 23 seconds left in the first stanza.

Marable finished with 16 carries for a game-high 95 yards on the ground, while sophomore quarterback Freddy Payton was 20-of-31 for 240 yards, with two TDs and one interception passing and rushed 12 times for 37 yards and two more scores.

“Making a Statement On Offense”

The two teams traded two more touchdowns in the second period before Appalachian broke things open late in the first half.

Williams smashed in from the one to cap a four-play, 77-yard drive, keyed by Thomas’ 55-yard connection with Hennigan and Coastal’s only return of the contest was fumbled at the Chanticleer three.

CCU (3-2, 0-1) was fortunate to not give up an App State recovery and TD on the play, but when the offense went three and out, a short, rugby-style punt was returned by Hennigan 12 yards to the Coastal 29. Four plays later, a perfect pass from Thomas to Sutton for 15 yards gave the Mountaineers its 35-21 halftime lead.

“We had to make a statement on offense,” Thomas said. “The two touchdowns before the half were big.”

Appalachian added a 22-yard scoring scamper from Harrington midway through the third quarter to build the advantage to 42-21 and CCU couldn’t get closer than 12 points the rest of the way.

While the start of the season has been a growing experience for Appalachian cornerbacks Shaun Jolly and Shemar Jean-Charles, that much maligned duo had some strong play in the second half and Jolly clinched the win with his interception and 24-yard return for a fourth-quarter touchdown. It was the second week in a row that the Mountaineer defense had contributed a score.

“There are still a lot of things we need to get cleaned up, a lot of details,” Drinkwitz said.

The Mountaineers have until Oct. 9 to get those things corrected when they travel to Louisiana-Lafayette for their next Sun Belt contest, a Wednesday night encounter being televised nationally on ESPN2.